<img src="https://www.qromag.com/wp-content/uploads/2008/03/bobmouldbandmarch13.jpg" alt=" " />Now with full band, Bob Mould was large and in charge, with more energy than other artists half his age – and the same could...

Now with full band, Bob Mould was large and in charge, with more energy than other artists half his age – and the same could be said about the crowd.The venerable musician has been playing for nearly thirty years now, first with legendary eighties punk band Hüsker Dü, then solo, then with acclaimed nineties alternative act Sugar, then solo again, as well as venturing into electronica and spinning as one-half of Blowoff, and on his own as LoudBomb.  But with 2005’s Body of Song, Mould launched on his first tour with a full band in ten years (as captured in last year’s Circle of Friends DVD – QRO review).  And now he’s back with a new record, District Line (QRO review), and they came back to the Big Apple on Thursday, March 13th.  Fillmore New York at Irving Plaza (QRO venue review) didn’t know what hit it…

While we all wait patiently for Mould and Hüsker Dü singer/drummer Grant Hart to follow in the footsteps of other eighties alt-icons who fell out, but have recently patched things up (The Pixies’ Frank Black & Kim Deal, Dinosaur Jr.’s J Mascis & Lou Barlow, Sebadoh’s Lou Barlow & Eric Gaffney), Bob Mould Band is really the next best thing – and in many ways better, because you get all of Mould’s incredible songbook.  It’s amazing that a musician with such a turbulent past can be so comfortable drawing upon it all – especially when his ‘new stuff’ can stand toe-to-toe with his classics.

Bob Mould Band opened the night like how he opened his last band, with the first two tracks off of Sugar’s first release, 1992’s Copper Blue, “The Act We Act” and “A Good Idea”.  The guitar grind that starts “Act” can stand as one of the great guitar openers, and it lit the fire that was to come.  Bassist Jason Narducy (Verbow) opened “Good Idea” with its own strong bass line starter, and seemed to perfectly channel Sugar bassist David Barbe’s back-up vocals throughout the night.

But after that, the band launched into almost entirely Bob Mould material, for the next eleven songs.  The upbeat, even catchy grind of “I Hate Alternative Rock” (from his self-titled, first post-Sugar record in 1996) had a much wider presence and fun.  That hope got even more refined on “I See a Little Light” (the single from his first post-Hüsker Dü record, 1989’s Workbook), the acoustic-on-record piece getting bombastic, when electric and with a band.  Keyboardist Richard Morel (the other half of Blowoff) earned his keep, as his keys held up the strange backwards portion of Copper Blue’s unique “Hoover Dam”, another bright-but-ass-kicking number.  Mould’s dips into electronica haven’t been as well received by his loyal fans as other things he’s done (no word on what they thought of his short-lived gig writing for professional wrestling…), but Body of Song’s “I Am Vision, I Am Sound” translated well to the live setting, even if it couldn’t quite keep up the break-neck pace.

It was after that that Mould finally remembered to tell the audience he has a new album out – “That’s why we’re here…”  With that, he launched into the first District song of the night, “The Silence Between Us” – “In another day and age, this would have been a hit single…”  He jumped back in time to 1990’s “Hanging Tree” (off of his other pre-Sugar solo record, Black Sheets of Rain), which was strong, but isn’t the strongest track on that record.  The “Hanging Tree”/District’s “Miniature Parade” combo was probably the weakest point of the show, but only in relative terms, though “Parade” was possibly the only piece the band played that wasn’t immediately recognized by the crowd.

And what a crowd it was!  Instead of your usual collection of city hipster twenty-somethings, too cool to have any fun (a lot were probably down in Austin for SXSW – QRO Festival Guide), instead it was thirty- and even forty-somethings, clean cut from the suburbs – that were rockin’ like they were still in high school.  These were the loyal followers Mould had collected, whether they’d followed him since Sugar or even since he did the Dü.  This isn’t to say there weren’t any youngsters at the all-ages venue – it was just that, in terms of enthusiasm, there was no difference between someone drinking his first legal beer and someone as bald as Mould.

After “Miniature”, the crowd’s flame was re-lit with “Your Favorite Thing”, the winning single off of Sugar’s final record, 1994’s File Under: Easy Listening.  But then Mould hit the crowd up with three of his best recent pieces, first District’s evocative “Again and Again”, then Body of Song’s equally powerful “Circles” and “Paralyzed”.  The sadness of “Again” and “Circles” grew more expansive, live, some of the feather-touch replaced with waves of emotion.  Meanwhile, “Paralyzed” reminded the audience that Mould hasn’t lost his ability to write a rock song, even with reverb and synthesizers.  Easy Listening came back with the very easy-to-listen-to “Can’t Help You Anymore” – maybe Mould’s only song with a “doo-doo-doo-doo”.

That provided a nice shift for the set’s closer, an Hüsker Dü triptych.  First came perhaps the two Hüsker songs Mould has most played in recent years, “I Apologize” and “Celebrated Summer” (both from 1985’s New Day Rising).  In all fairness to Mould’s excellent recent material, there’s just something extra special about hearing an Hüsker track.  Maybe it’s because even the thirty-somethings in the audience weren’t around to see Hüsker live.  Maybe it’s because Mould doesn’t have to play any of it (and a more egotistical musician wouldn’t).  Maybe it’s because the pieces were made live, when the band had much less money, yet were releasing albums at a rapid pace (1985 also saw the release of Flip Your Wig, and Zen Arcade came out the year prior).  Maybe it’s because everyone had to wait fifteen songs for an Hüsker piece, possibly thinking they weren’t going to get any.  Maybe it’s because the eighties rule.

Whatever the reason, the Bob Mould Band brought the house down with their final three songs before the encore break.  “I Apologize” had a driving fury (with Narducy equally able to fill in as back-up vocals for Hüsker’s Hart or bassist/handlebar mustache-enthusiast Greg Norton).  “Celebrated Summer” had its perfect guitar, then bass, then drums (from former Fugazi drummer Brendan Canty) opener down pat, warming up the crowd that didn’t need any more energy.  If anything, the crowd was too hyper at this point; the suburb-dwellers moshed like it was 1984 on Flip Your Wig’s wig-flipping explosion of power, “Divide & Conquer”.  By the point one drunk elder was careened into one of the monitors at the front of the stage, prompting the band’s roadie to not just have to run on stage readjust it, but actually shove the fellow off – and the idiot shoved back – one almost felt like Mould & co. wanted to rein things in, but couldn’t.  They’d unleashed the beast, and there was no way you could turn “Divide” down from eleven.

The encore break was perfectly timed to cool off the crowd a bit (and gave security a chance to haul that one dude’s ass out – “You can slam-dance all you want, just don’t move the furniture…” Mould later joked), but the band stayed off stage for only maybe two minutes.  The rest of the set was a bit like the main part, only condensed, as they started with two solo pieces, “Moving Trucks” and “Egøverride”.  The softer, sweeter “Trucks” (from 1998’s Last Dog and Pony Show, the album that thankfully didn’t live up to Mould’s original claim of it as his ‘last rock record’) got fuzzy in its expanse, live, but still gave Mould a chance to thrash.  Bob Mould’s single “Egøverride” (‘cause he hasn’t used funny letters enough…) played upbeat and rocking, yet more synth-ed, like much of Mould’s solo work of the last ten years-plus.

Copper Blue came back with its absolutely wonderful “If I Can’t Change Your Mind”, and the band left the stage – only to come back for a second encore, and with the oldest song of the night, “Chartered Trips”.  It’s been almost a quarter-century since Hüsker Dü’s epic double-LP Zen Arcade came out (back when that meant literally two records, back when LP’s were LP’s), and you could say there hasn’t been a better record put out by any band since.  Certainly, no one would have argued with that after hearing Zen’s powerful, intricate, amazing “Chartered Trips”.  The Bob Mould Band stayed in the past for their final number, Flip Your Wig’s single, “Makes No Sense At All”, but, by that point, all wigs had been flipped, and all sense had long since left the building. 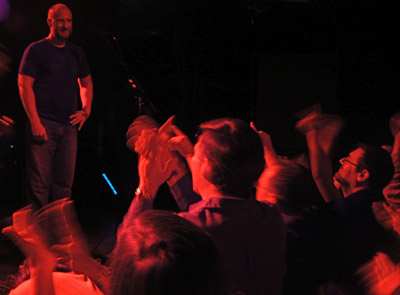