<img src="http://www.qromag.com/wp-content/uploads/2009/04/bobmouldlifeandtimes.jpg" alt=" " />Alt-veteran Bob Mould doesn't give his best delivery, but it's still stronger than most on <i>Life and Times</i>. ... 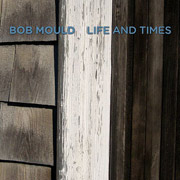 For almost three decades now, Bob Mould has been something of a constant in indie-rock, yet also ever-changing.  He’s been around since the early eighties, but in different forms: first in iconic punk act Hüsker Dü, then solo, then heading alt-rock Sugar, then solo again – he has even done electronica as LoudBomb, and DJ-ing as Blowoff.  He’s gone from the brash, sloppy-drunk (and more…) punk of the eighties to something of an elder statesman today, yet retained a loyal audience (that has aged right along with him), never breaking into the mainstream, but never dropping off the radar, either.  And unlike most other late & much-loved eighties and nineties alt-acts, Bob Mould has not had an Hüsker Dü reunion (it seems the blood between him & Grant Hart – QRO photos – is even worse than that between Frank Black & Kim Deal, or J. Mascis & Lou Barlow…).  His latest, Life and Times, unfortunately hews a little too closely to this millennium’s late-period Mould – but that’s still something with weight.

While the release of his last, District Line (QRO review) was delayed, Mould kept on writing, and thus had enough material for a brand new full-length only about a year after the (eventual) release of District.  Yet, in some ways, Life and Times feels like it came out a bit too fast, as the record really retreads the material he’s been doing for almost fifteen years now, since leaving Sugar – touching especially on his two least-regarded records, 1996’s post-Sugar Bob Mould, and 2002’s ill-fated foray into electronica, Modulate.  Bob Mould is something of an underrated record – after the more pop-friendly success of Sugar, the downbeat eponymous release seemed too adult, while its overriding electronic echo came of as a bit forced, but its tracks have held up better over time.  The same can’t be said for Modulate, however – sounding like Bob Mould put through an overdone electronica remix, the best that really be said about that record is that it convinced Mould to seriously shift gears, leave the electronica to alter-ego LoudBomb (an anagram of ‘Bob Mould’), and went on to put out the return to form Body of Song in 2005.

The stripped to electric guitar, with similar electric echo, of Bob Mould comes out right at the start of Life and Times with the opening of the title track.  While not a bad sound, it was just played too much on Bob Mould, but is relieved, somewhat, by louder portions, where Mould goes epic.  Yet even that epic style is employed a bit too frequently, making it tough for decent tracks like “The Breach”, “Mm 17” and “Spiraling Down” to stand out.  But this isn’t always the case: lying between those last two, “Argos” is amped up by a little more speed and even a catchy garage riff underneath, while “Bad Blood Better” utilizes the emotional heft Mould has always had in his back pocket.

Nowhere does Mould use that heft more than with clear Life stand out “I’m Sorry, Baby, But You Can’t Stand In My Light Any More”.  Strangely put in the penultimate slot on the track list (where artists often stick their least-favorite track), maybe that was because it doesn’t quite fit with the rest of the record – but is so powerful, it couldn’t be left off.  “Sorry” is a song he’s had for a few years now, calling it “the most depressing song I’ve ever written”, and while “Hardly Getting Over It” would beg to differ, “Sorry” more than effectively uses Mould’s emotion and neo-Mould reverb.  Unfortunately, that’s the only track where that reverb is really used well, as “City Lights (Days Go By)”, “Wasted World”, and closer “Lifetime” all feel too Modulate-ish.

But even there, Bob Mould does pull a few tricks off, like the bigger & better portions of “Wasted”, or his sad nature helping out “Lifetime” (which also does unfairly suffer from being slotted after “Sorry”).  Not really a record that’ll win any new followers for Mould, and may make of his longtime fans a little queasy about how much it draws from his later, weaker work, but Life and Times is still solid – and far more solid than most of what comes out these days, or what anyone would put out in their third decade of rock ‘n’ roll.

MP3 Stream: “I’m Sorry, Baby, But You Can’t Stand In My Light Any More“

The Thermals : Now We Can See