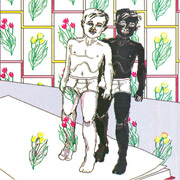 Not short for Robert, or anyone who ever actually existed for that matter, BOBBY is the psych-laced art-folk collaboration of seven recent Bennington College graduates – and also the title they assigned their debut.  With such a simple name, it would not be unwise to suppose that one may suspend expectations, which may have been the band’s greatest, most inconspicuous intent.  Judging by the modest, pixilated album art featuring two identical boys – one depicted stark white and the other as a shadowy inverted negative – imagining chiptune electronica would not seem so far off, but oh, is it.

From the very first few seconds of the record to the very last, BOBBY calmly erupts with layered hypnotic melodies glazed with ethereal harmonic vocals.  The delicate yet eerily stirring chants of "Where are you hiding?" in the album opener, "We Saw", demonstrate this best.  "Sore Spores", a much more upbeat single, leads with a loop of faint droning that sounds something like what a UFO might if it were circling above preparing for abduction.  Shape-shifting "It’s Dead Outside" encompasses a little taste of the album as a whole (juxtaposed female/male harmonies, lethargic melodies and steady chanting), rivaling the opener in length at just under seven minutes.  Two varying instrumentals make up the record’s core, the first, "Loading Phase" is the drowsiest of the two, gliding along nonchalantly without calling any real attention towards it, while "Downing", though brief, thrives on a thundering feedback loop.  Glorious closer, "The Shed", draws ceaselessly from Gregorian chant until it fades out into a noisy static and a subsequent round of apologies.

Maybe BOBBY really didn’t realize that they were fooling us with their unassuming name.  Maybe the boy on the cover art is desperately withholding his laughter at our initial doubt.  Whatever the case, the music speaks for itself and it just adds to their charm.

Tiny Fireflies – “We Made A Pact”