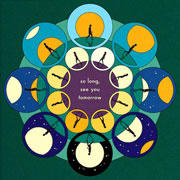 After London’s Bombay Bicycle Club signed with major label Island in 2008, they put out a full-length in 2009, 2010, and 2011 – and managed to change styles each time, from indie-rock to folk to eventually electro with 2011’s A Different Kind of Fix (QRO review).  They finally took a breath, and only now comes latest So Long, See You Tomorrow, which is a similar Kind of Fix.

Click here for photos of Bombay Bicycle Club at CMJ 2014 in New York, NY in the QRO Concert Photo Gallery

Different is what launched BBC into new heights, with killer singles like “How Can You Swallow So Much Sleep”, so it shouldn’t come as a surprise that the band has stuck to that formula, even after all of the time between albums and all the roaming before Different.  Yet whereas Different was refreshing, Tomorrow feels like you’ve been there before.  More acts are doing indie-electro today even than in 2011 (and the wave shows no sign of cresting), and while Tomorrow is a fine record that doesn’t misstep, it also lacks songs to stand out – “Carry Me”, for instance, was a poor choice for a single (the tropical “Feel” would have been better).

If it ain’t broke, don’t fix it, and there’s definitely good reasons for Bombay Bicycle Club not to repeat their earlier genre-shifting ways.  But a little more evolution would have been nice, as Tomorrow feels like yesterday.