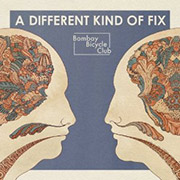 Bombay Bicycle Club have certainly been busy.  Since signing with major label Island in 2008, they’ve put out a full-length in 2009, 2010, and 2011.  And they’ve changed styles each time – whereas debut I Had the Blues But I Shook Them Loose was a slice of indie-rock, the group went folk with follow-up Flaws.  And now A Different Kind of Fix (out in U.S. in 2012) sees the BBC go electro.

Bombay lets the listener know from the get-go with electro chill & dance opener “How Can You Swallow So Much Sleep”, and if you’re worried about them going electric, the strong piece lets you know not to be.  Different feels like a solid indietronic album from an established band that’s done a bunch of them, not a new group who’s changed style with every release.  Indeed, BBC are strongest when they go full-bore for the electro-dance on “Swallow” or middle track “Shuffle” with its killer indie-pop/dance keys, or even the nighttime disco-smooth “Lights Out, Words Gone”.  The slower & sadder tracks like “Fracture” aren’t as much a stand out, and the record didn’t need the choral vocals of “Beggars” or echoing closer “Still”.  But the band can also do a larger wash, such as on the big/small, far/close “Leave It”.

You could say that longtime fans of Bombay Bicycle Club would be thrown by this move to electro, but they haven’t been around long enough to have longtime fans, and it’s not like they haven’t changed things up before.  What they have done is find a way to be both prolific and original.