<img src="https://www.qromag.com/wp-content/uploads/2012/03/bonivermar8.jpg" alt="Bon Iver : Live" />There is no simple way to describe what occurred at the Sidney Myer Music Bowl on a cloudy autumn evening in Melbourne.... 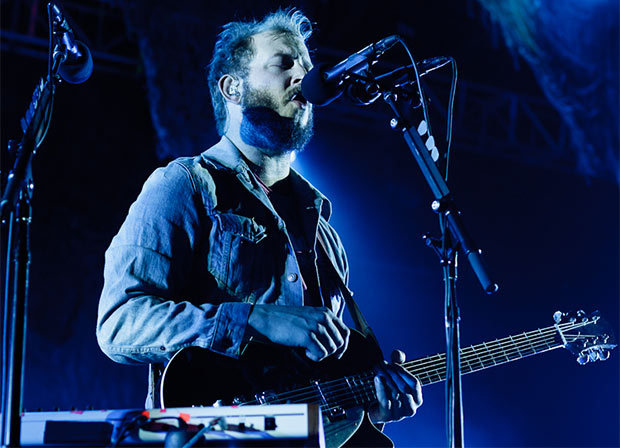 There is no simple way to describe what occurred at the Sidney Myer Music Bowl on a cloudy autumn evening in Melbourne, Thursday, March 8th.  Justin Vernon and eight other extraordinarily talented musicians strolled onstage with little fanfare, confident and sure of what they were about to treat the audience to.  What followed was little short of inexpressibly immaculate.  Though the newer Bon Iver material was stunning, the highlights of the night came in re-imagined old material; For Emma Forever Ago (QRO review) was brought to life, a transformation from the hauntingly sparse to the grand and celebratory.

Opening, as does the second album, with “Perth” and “Minnesota, WI”, the crowd was transported to that sonorous world Vernon has so delicately put together.  “Brackett, W9” from benefit compilation Dark Was The Night (QRO review), “Hinnom, TX” and “Wash.” were performed with such frostbitten clarity that it felt this could only be the summit of the show.  But it was not.  An excruciatingly beautiful rendition of “Flume”, for many their ‘first’ Bon Iver song, had the crowd contemplating in quiet awe, to retain the memory forever. 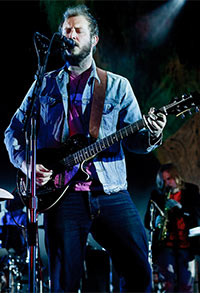 Midway through the set, it dawned on Vernon: “Wow, um, this is the biggest audience we’ve played to ever…  We couldn’t actually believe it,” yet they well and truly surpassed the expectations of the 12,000-large crowd.  The enormous arena, an ostensibly inappropriate milieu for Bon Iver, was turned into a cathartic, musico-religious amassment.  Songs such as “Blood Bank”, “Holocene”, “Calgary”, “Creature Fear” and “Beth/Rest” took the hipster pilgrims there.

Legally pressed for time, Vernon insisted, “Let’s not do this fake encore thing,” so as to play more songs.  This emphasized the gratitude he has for his fans, wanting to give them more of the tunes they love, rather than indulge in the faux-grandeur of the modern encore.  To say goodbye to what was a truly 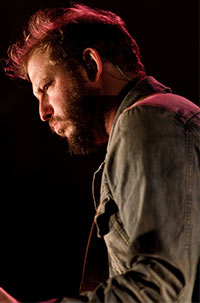 intimate show, an extraordinary feat given the size and scale of the arena, the last four songs came from that cabin – the wooden, snowy, desolately lonely place of grief that captivated popular culture against all odds.

The Eau Claire native found time to nostalgically return to his solo semblance, although briefly, with the heartbreaking “Re: Stacks”.  The band rejoined him for thumping versions of “For Emma”, “Skinny Love” and “The Wolves (Act I and II)”.  The latter two tracks were accompanied so vocally by fans that Vernon’s voice almost became indistinguishable.  It underscored how perfect his songs are – they can be solidly expanded and re-orchestrated into his current musical spirit, whilst retaining every ounce of original ethos.  Over the night there was a wonderful sense of his musical development, a narrative arc from suffering to exultation, which was convoyed by thousands. 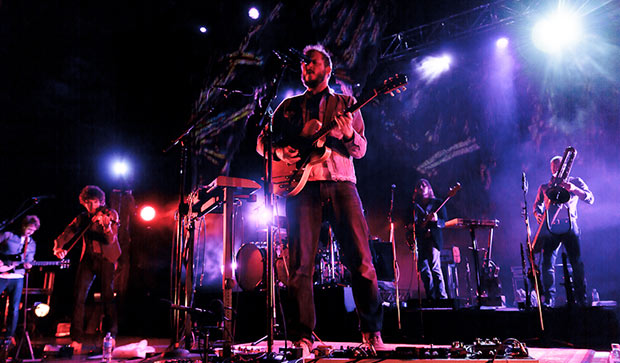 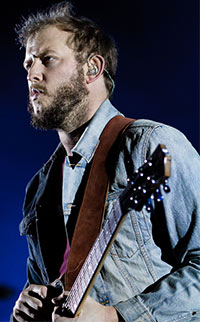 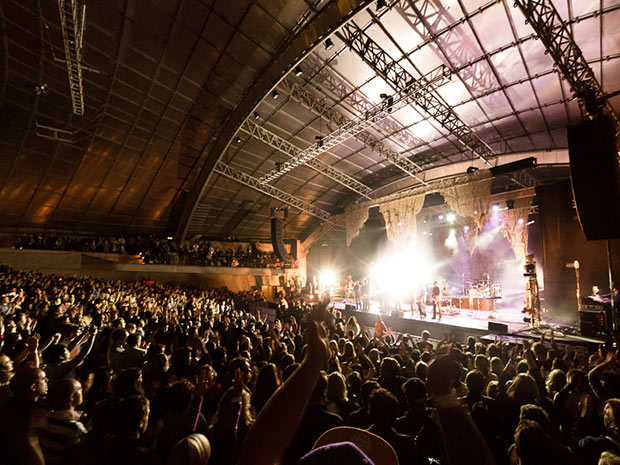