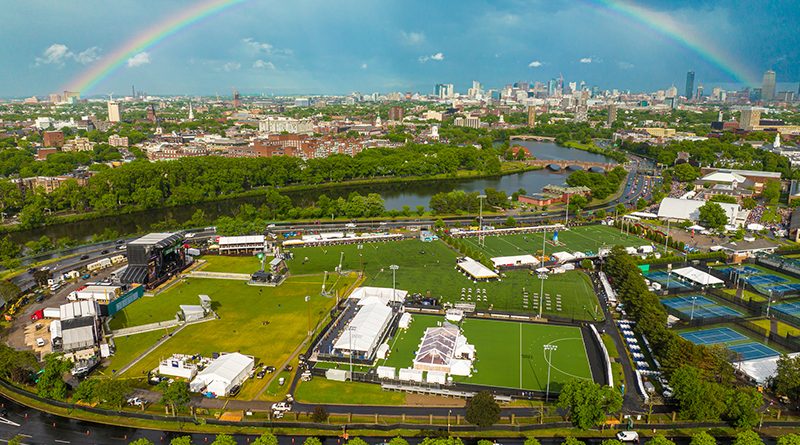 Lots of festivals got hit hard by COVID cancellations, from SXSW to Coachella, but one hit particularly badly was Boston Calling, as it was forced to suspend for not one, but two years, as it occurs on Memorial Day Weekend (to get those college kids before they leave for the summer). But in 2022 it came back, Friday-Sunday, May 27th-29th, only to lost most of its headliners, rain delay, acts cancelling due to COVID, and more.

Yet the event was a success, well-run (even when evacuating & reopening), great music (even with last-minute fill-ins), and much more.

The one issue every festival has dealt with since the beginning of time has been the weather, and of course it reared its ugly head at Boston Calling ’22. We had all seen the forecasts and knew that a storm was likely rolling in, but didn’t make it any easier that at around 3:30 PM, the announcement was made for everyone to vacate the festival grounds [note: including press, though we tried to stay in our tent as long as possible], going either across the bridge to Harvard Square or to next door Harvard Stadium. The stadium was hardly how you wanted to get into Harvard, trying to find a dry place beneath the concrete as you waited & hoped, but thankfully the storm passed and doors reopened at 5:30 PM. Hardly ideal, but compared to be stuck out in the rain and/or the whole day cancelling, was better than it could have been.

And Saturday was already star-crossed with headliner The Strokes having canceled due to COVID positive text prior, bringing a second set by Friday headliner Nine Inch Nails, but also after the storm, Australia’s King Gizzard & The Wizard Lizard canceling right then & there due to their own COVID positive result. Though that did make it easier to rearrange the storm-shortened schedule, with pretty much everyone else still able to perform.

Still wearing his mask (as always) was Orville Peck at the Blue Stage. Peck has gotten notice as much for his fringed mask and high-profile fans like Lady Gaga as for his actual music, an unusual deep-voiced country, and while it’s still hard not to think of it as a schtick, as something that will expire, he has been keeping it up. Over at the main Green Stage were the Black Pumas, bringing smooth soul-rock that goes down easy. One might struggle to imagine someone having easy band as their favorite, it’s also hard to imagine someone not enjoying seeming them at a festival. Perhaps that’s why they seem to play every festival imaginable.

It was hard to find the small Orange Stage that hosted local acts, but fans did for Van Buren Records. They’re a local hip-hop collective made good, or at least topper of that stage, those that were there were certainly into it (including multiple folks who, according to their t-shirts, were working “BAR OPS”). It’s important any festival to have a stage for smaller local acts, but particularly a city with such a rich local music scene & history as Boston, even if the stage seemed a little shunted to the side (even ghettoized).

While Boston Calling ’22 went wide appeal like most festivals coming back from COVID, it was notable that its line-up still leaned rock, without Gen Z pop – or even much hip-hop. But of course, even a rock fest like this was ruled by Run the Jewels. It’s a backhanded compliment to say, “I’m not into rap, but I like this,” but it’s very true about RTJ (and it’s not like rap fans weren’t there as well). Their ability to find fans across genres should be praised, as well as their excitement at just being so big. Not to mention being such a killer team-up, hard in any art form. And they do have some common denominators, like Killer Mike calling out asking, “What’s it like, being in a legal state?…” But what’s his current feeling on gun control?…

Even with the rescheduled, ‘fit them in’ new schedule, for some reason there was still twenty minutes between RTJ’s close and NIN’s scheduled start at the next door Green Stage, but in actuality started five minutes early, because Nine Inch Nails aren’t just professionals – they also love playing. Trent Reznor noted at the start that, “We’re not The Strokes, if you haven’t figured that out yet.” Indeed, he seemed amazed that they’re now a “reliable band,” thinking back to his first trip to Boston over thirty years ago, to record at Synchro Sound on Newbury Street, and how shocked he would have been then that, “Anyone would even have heard those songs or that anybody would even give a shit about them years and years later, I wouldn’t have believed you. So, I’m grateful to be here.” He added on their reliability, “If anybody has a birthday party or a bar mitzvah or need someone to look after your plants while you’re on vacation, hit us up. We’re here for you.” And this wasn’t just playing the same set again, because thirty-plus years gets you a lot of deep cuts (and a new cover of Bowie’s “Fashion”), with only a few must-play repeats (“Wish”, “Head Like a Hole”, “Hurt”).