It was a big Saturday at Boston Calling Spring.... 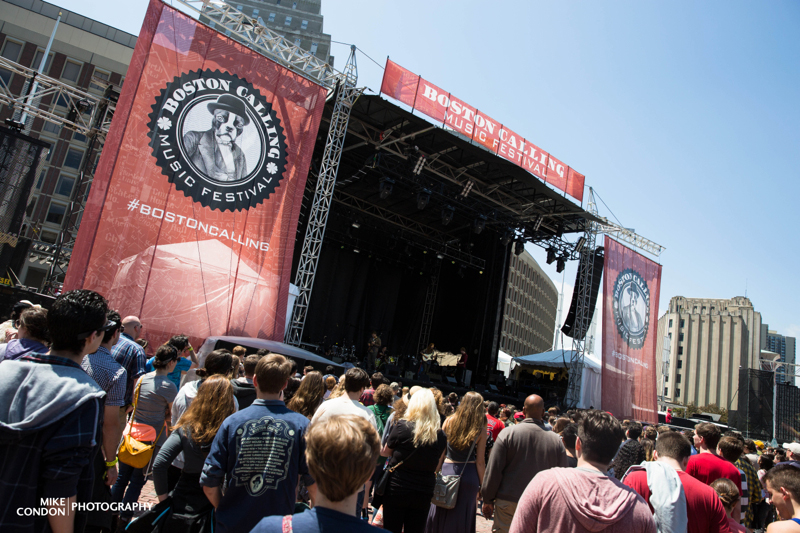 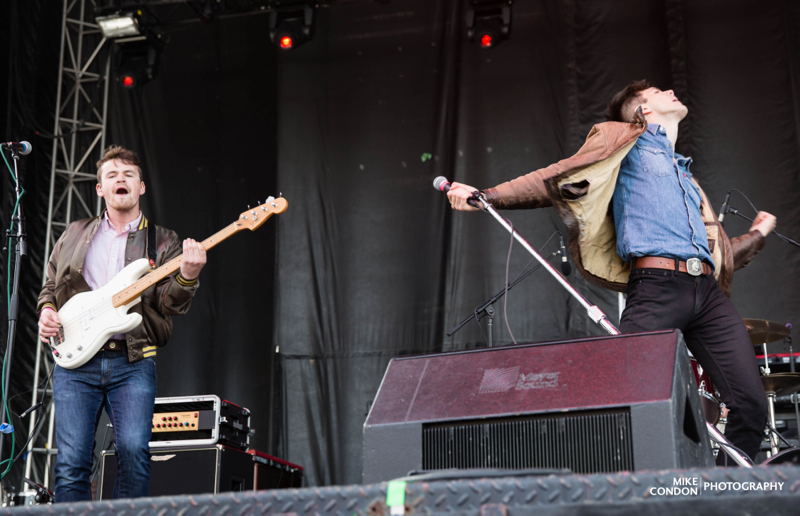 Saturday, May 24th, kicked off with Newton MA locals Magic Man, a quick set to get the day rolling. With a poppy, electric feel, their lead singer led with a ridiculously high energy to set the tone for the day. An upbeat start to day two, they ended their set with their song “Pars”, a sweet little electric piece. 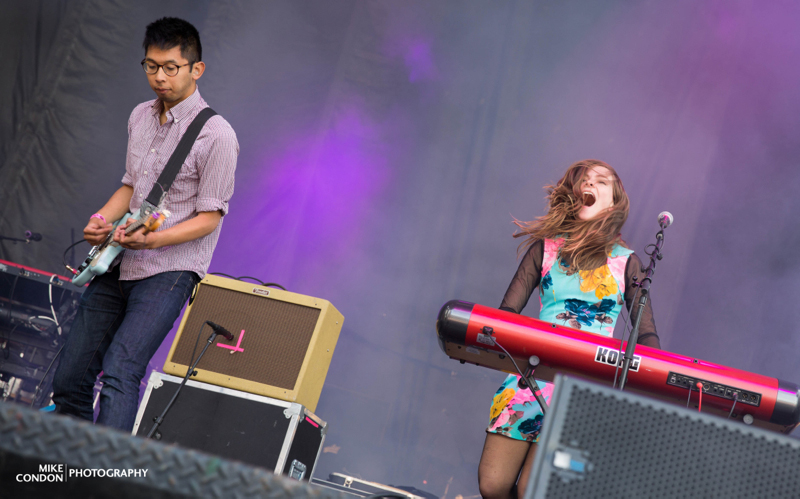 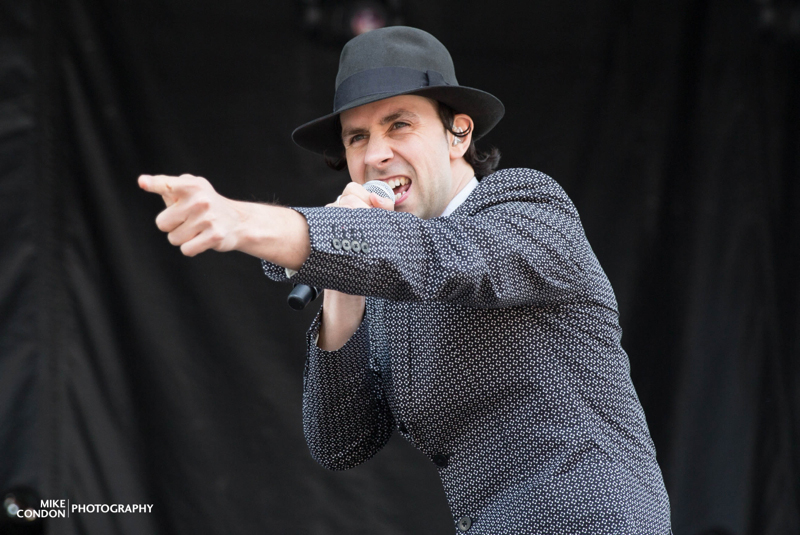 Next up was Maxïmo Park, playing upbeat tunes one might listen to on a long road trip with the sun shining and the windows down. They were energetic and their sound was very rock and roll with soaring vocals and anthem like feel to each song. A bit alt-rock with a ting of classic rock and a little ambient, the singer loved to that with the crowd at one point announcing they would, “Ease you into Boston Calling with softer, more electronic tunes.” Their set was chock full of anthems for your twenties, with a bit of late ‘80s British punk thrown in. Clearly smitten to be playing in Boston, the lead singer said, “In England we play on fields… Trying not to kiss your ass too much, but it’s really nice to be here!” 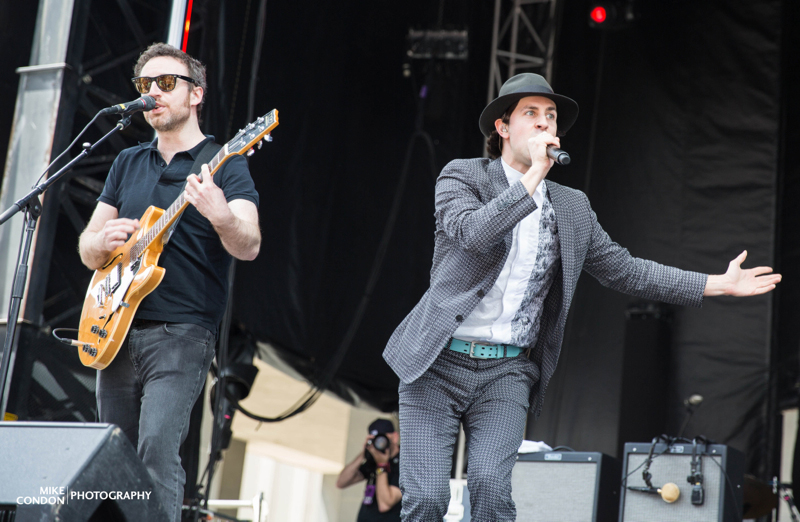 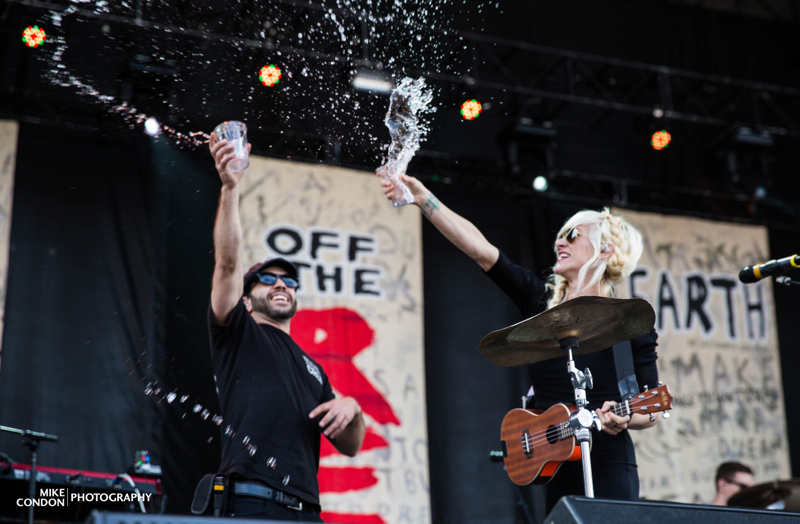 Walk Off the Earth was next, with a creepy announcement telling listeners to “Enter our world.” The band came through in a cloud of smoke, excited and bouncing all over the stage to greet their audience. Their songs gave the impression that they care a lot about social issues and have a lot to say. Clouds moved around in the distance but for their set it stayed sunny and the sky blue, and this band clearly loves to sing together in an epic way. They’re a band with passion and ferocity – here to please their audience and keep the party going. They came together for an acoustic rendition of Gotye’s “Somebody I Used to Know”. Flags waved on stage toward their end of their set and there was a bit of a drum-off between band members amidst flashing lights that contributed to the celebratory nature of the day. 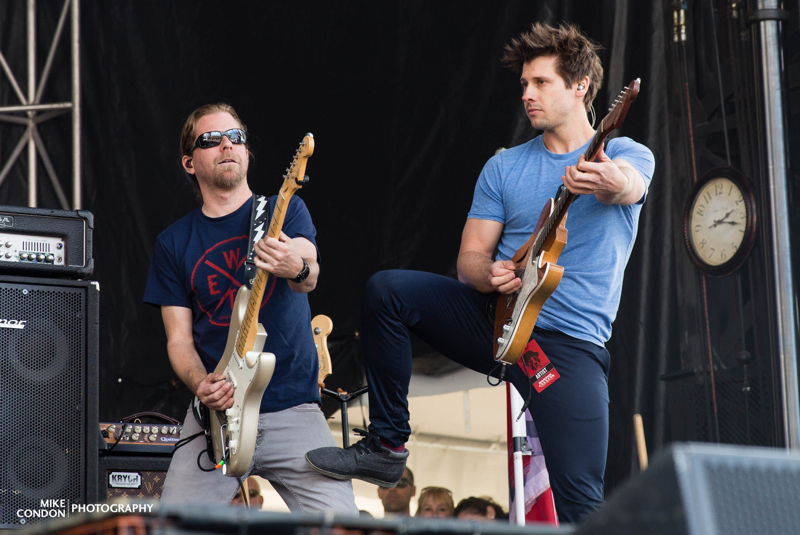 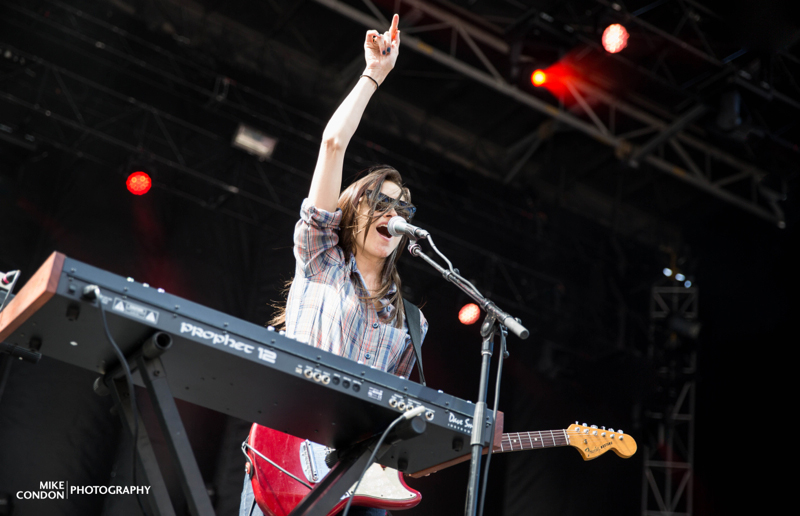 Warpaint, an all-female group and one of very few female-centric acts of the festival (what gives, curators?), arrived on stage and they played their ambient, experimental rock tunes below clear skies. These are women full of talent and poetry, and they crooned and jammed their way through Saturday’s high afternoon heat. The crowd began to fro as more and more people made their way to the stage wondering who and what was happening. They closed their set with a cover of David Bowie’s “Ashes to Ashes”, a fulfilling end to a beautiful performance. Mixing old and new techniques made Warpaint a definite attention grabber and may have been the odd group out for the weekend but they were highly enticing (Ben Gibbard of Death Cab For Cutie – see below – later remarked, “Today was a big day for me, I finally got to see Warpaint live – they were fucking incredible!”). Their set had a ghostly, rainy day feel that echoed off every corner of City Hall Plaza, full of emotion and harmony, giving off a sensation of being on an epic quest. 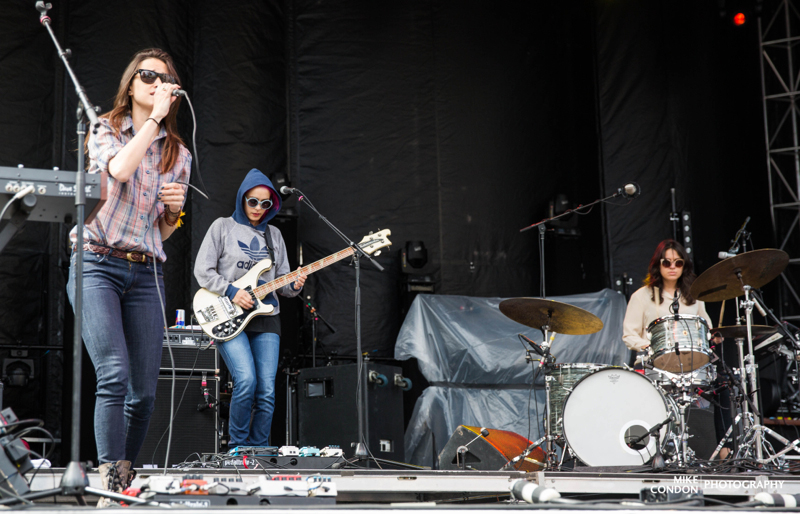 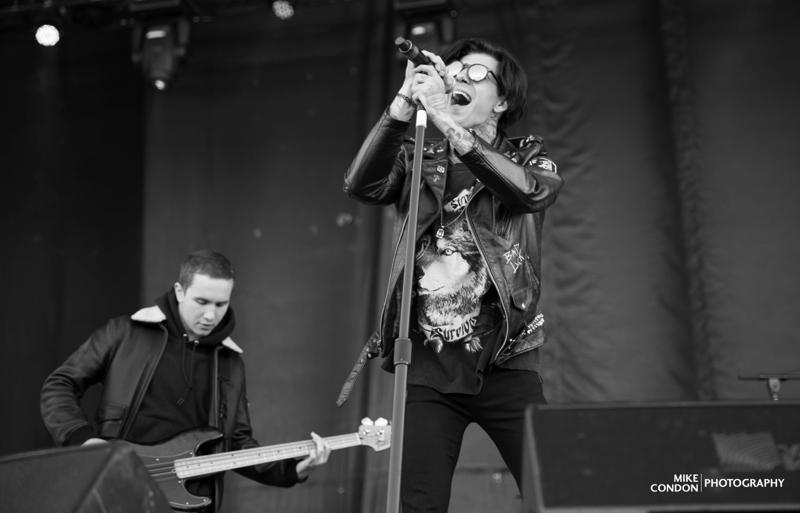 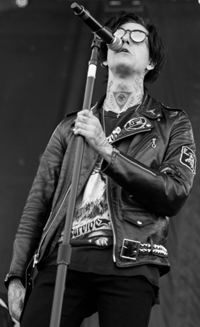 The Neighbourhood was up next with a true rock and roll show – an LA band of electronic indie-rock riffs that have a dash of hip-hop. One of the most engaging frontmen of the afternoon, clearly a fan favorite, the singer had the audience singing to every tune, hands clapping overhead. Their songs are fancy and elaborate pop tunes with a heavy drumbeat, poetic and soaring music made for sharing (with 22,000 of your best friends, no less). Lead singer Jesse Rutherford bobbed around stage, their music a clear product of passion. There was a sort of otherworldly feeling to their set, a transportative feeling that had the audience dancing and forgetting they were in the middle of a massive brick plaza. 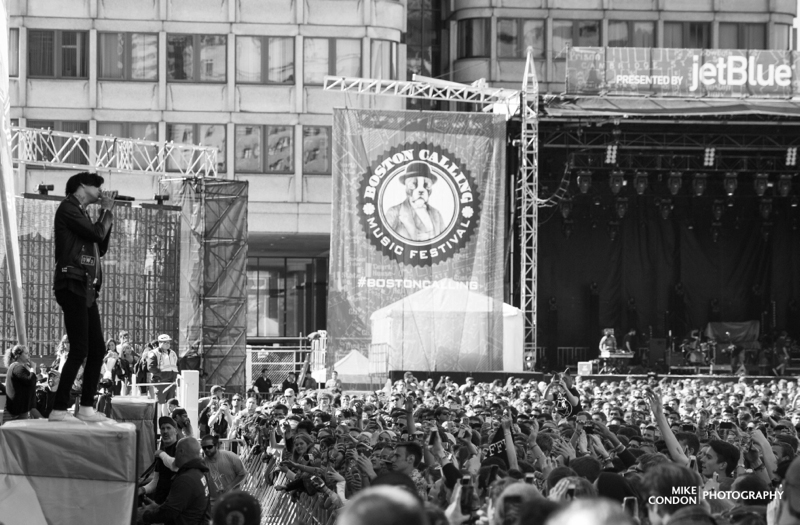 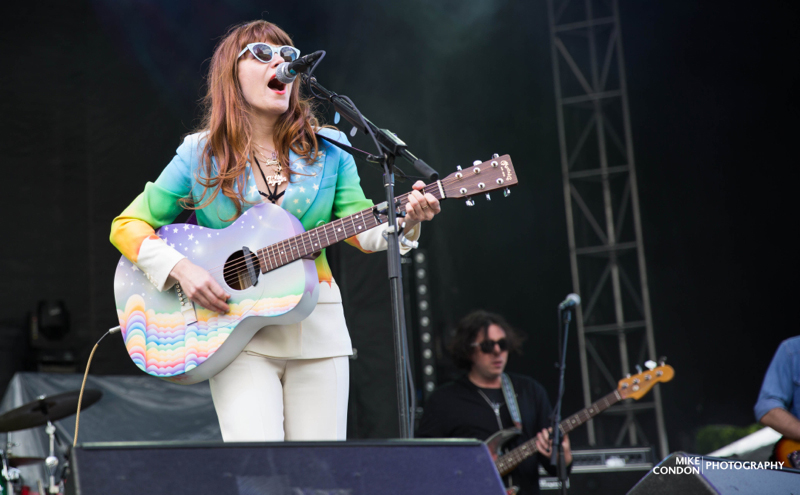 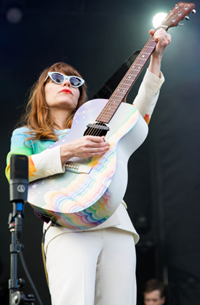 Out came Jenny Lewis on the blue stage, with silver cat-eye sunglasses, red lips, and her signature bangs, wearing a blazer of the dreams of ‘80s kids – also worn on the cover of her new album to be released in July. It’s been years since Lewis has released a solo project (QRO album review) and years since a solo tour (QRO solo photos). The crowd yelled with joy as she walked on stage and dove right into the music with “Head Underwater”, a perfect summer ditty, and then to her hit “Pretty Bird” – a slow, creepy charmer that showcases Lewis’s gorgeous and haunting vocals. Working through a mix of Rilo Kiley (QRO album review) songs and ones from her numerous solo projects, Lewis played both the piano and the guitar and crooned clear across the plaza to a sea of fans hailing her perfection, to which she commented, “You guys are real good listeners. I’m impressed!” An excellent combination of dance tunes and weepy love songs, Lewis led festivalgoers into the sunset with a hop and a skip, ending with a beautiful rendition of “Acid Tongue”, with Lewis on guitar and her band harmonizing in a close group behind her. 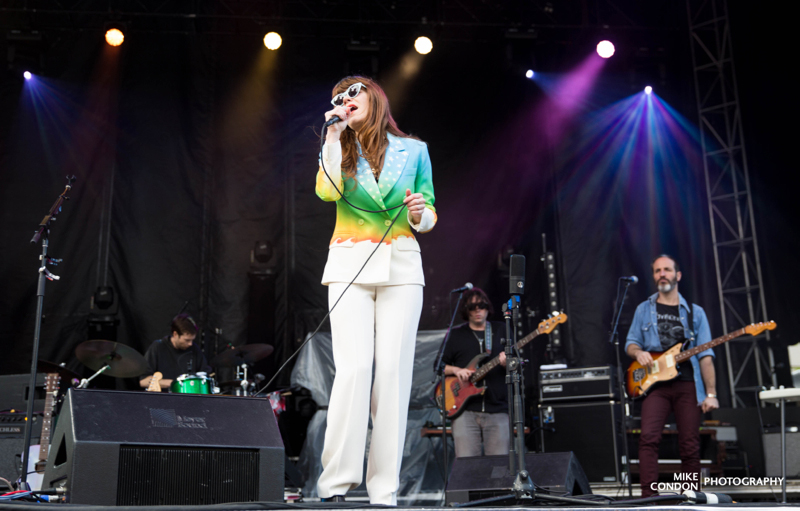 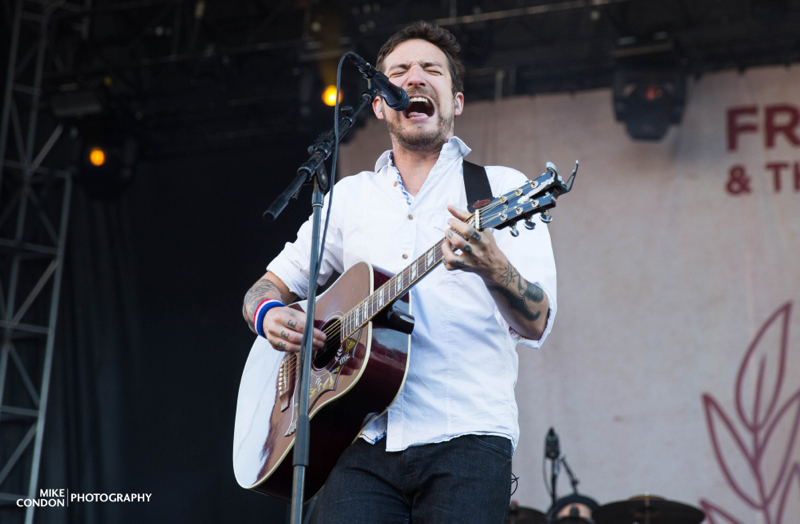 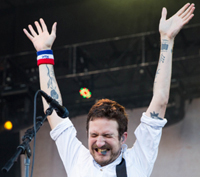 Frank Turner & The Sleeping Souls were another crowd pleaser, the guitar-rich band full of energy, excitement and passion, another band perfect for summer listening. During fan favorite “Dan’s Song”, Turner called a fan on stage to play harmonica through the entire song. Complete with an electric mandolin, the band rocked through the afternoon amidst the cheers of the audience. A folky, uplifting break in the rock heavy weekend, lots of festivalgoers left as fans. 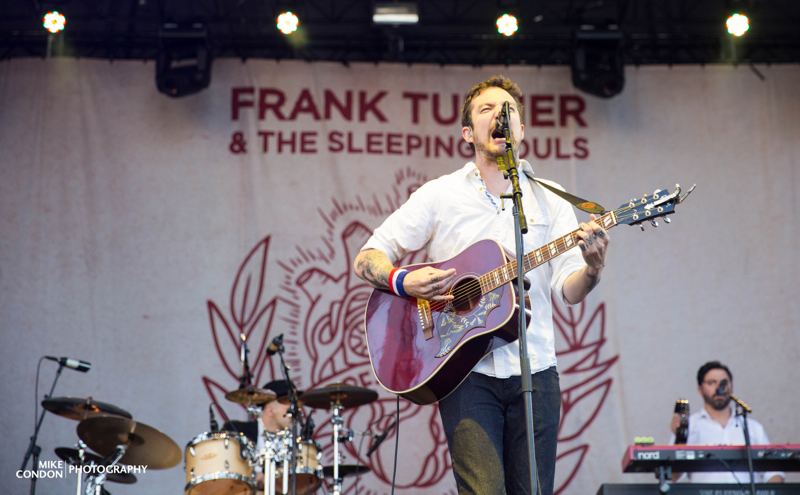 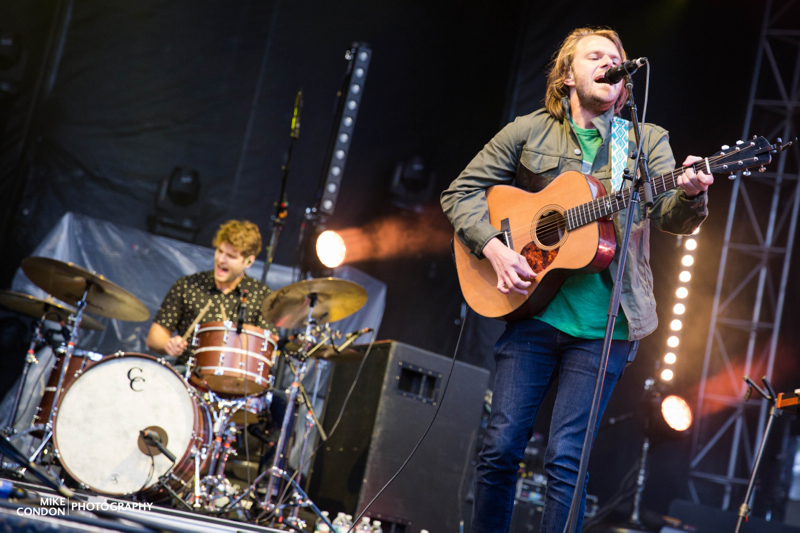 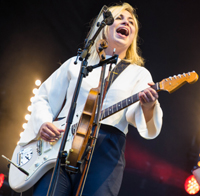 There was lots of talk in the crowd of The Head and The Heart, known for their soulful rock music. They played a set full of the sweet love songs they’re notorious for, gorgeous harmonies drifting over a collective force of piano, guitars and drums that collide into poetic rock. It seemed almost too perfect as the rain started to fall slightly during “Down in the Valley”, and they finished their set just as the heavens opened up and drenched the entire plaza. 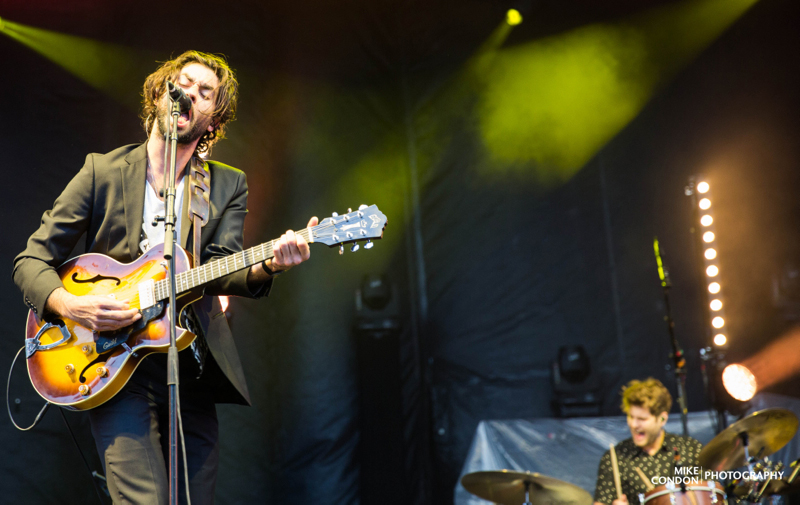 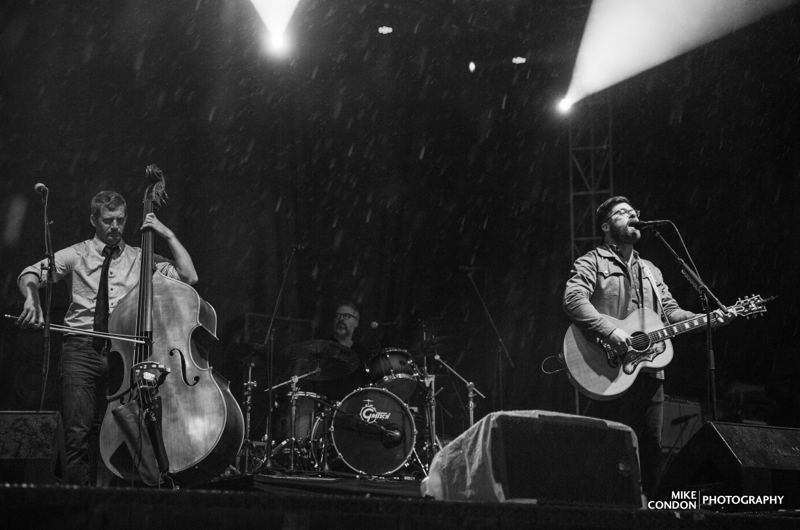 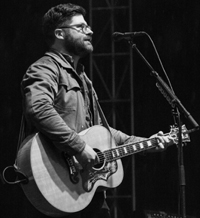 The Decemberists appeared in the downpour, playing their first full performance since 2011. Premiering two new yet to be released songs from a forthcoming album, the band played both hits and fan favorites including “Oh Valencia!”, “The Crane Wife 1 & 2”, and “Down By the Water”. Singer Colin Meloy remarked, “The weather makes you all look more attractive… Like you’ve just come in from a tropical water shower,” and launched into “Calamity Song”, one of their more upbeat tunes that had everyone dancing to forget the cold rain. 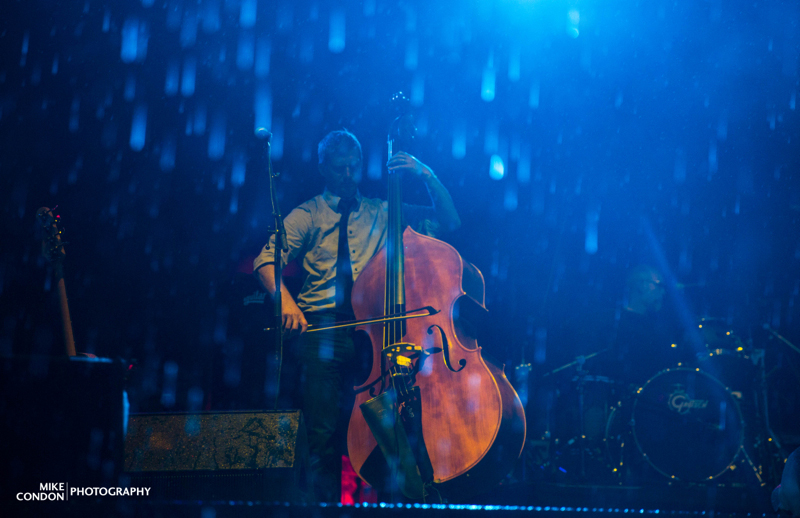 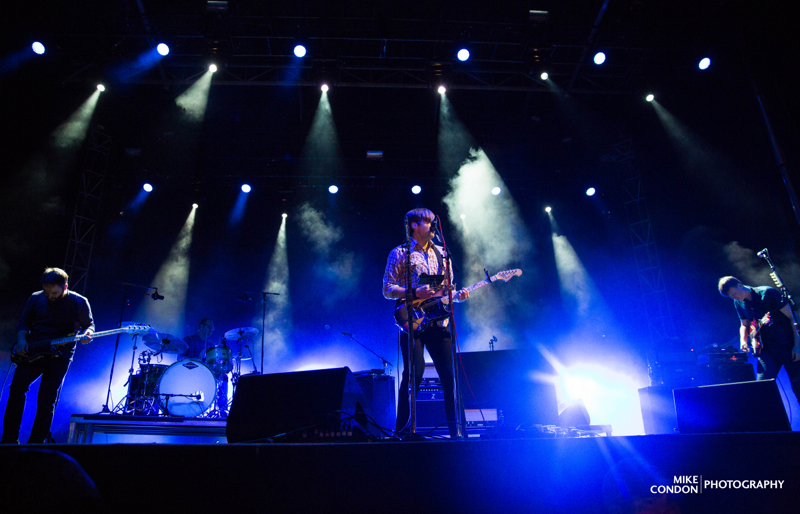 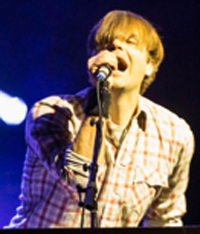 Finally the rain stopped and the wind picked up through the plaza and Death Cab for Cutie came onstage. Starting with “I Will Possess Your Heart”, they led with a teaser intro that had everyone wondering if singer Ben Gibbard would ever start singing. This was a powerful rock and roll set, unexpectedly so for some, and for fans, well, it felt more like hanging in a friends living room listening to your favorite songs. They played old classic favorites for fans and many of their radio hits that made for quality dancing as the stars peeked through the clouds. A few songs in, Gibbered gave a shout out to the interpreters at the front of the stage who were, as he said, amazing, completely devoted to each performance and indeed stole the show. Death Cab for Cutie played a three-song encore to end the day with a sweet, satisfying, buzz. 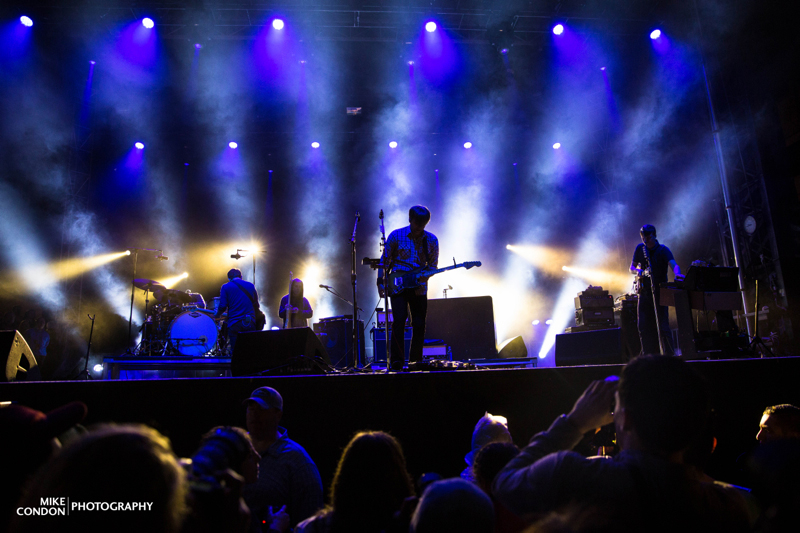