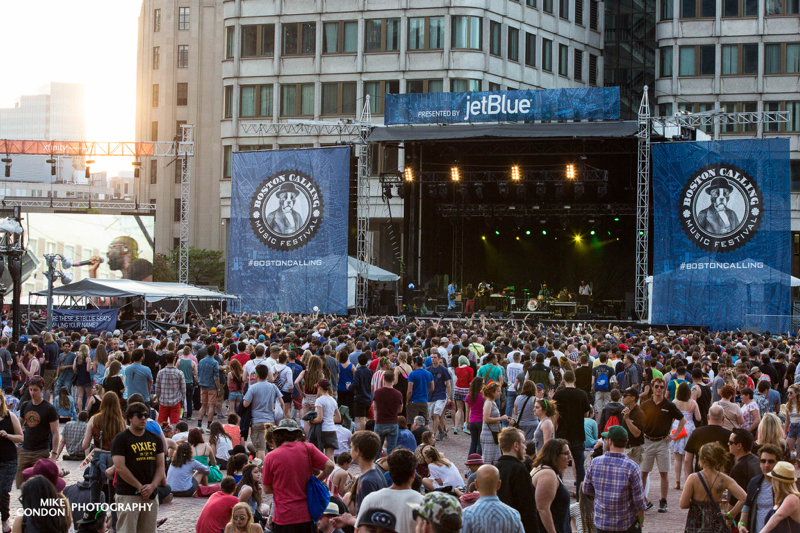 The third season of Boston Calling music festival kicked off Friday night, May 22nd, under a clear sky, the wind whipping through City Hall Plaza. The beautiful thing about this year’s lineup is that there truly was something for everyone, and even the head-scratcher acts drew a devoted crowd to their sets. 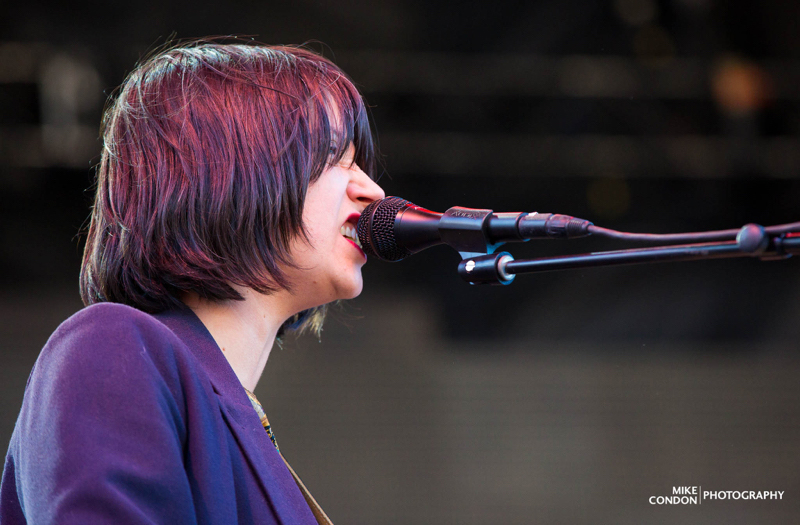 The first act of the spring festival, which many audiophiles view as the kickoff to summer concert season, was Sharon Van Etten, a songstress with a bluesy rock and roll sound. With a voice that can be at once gritty and dreamy, Van Etten played a quick set of earnest songs, gathering an eager crowd ready to sink into three days of music. 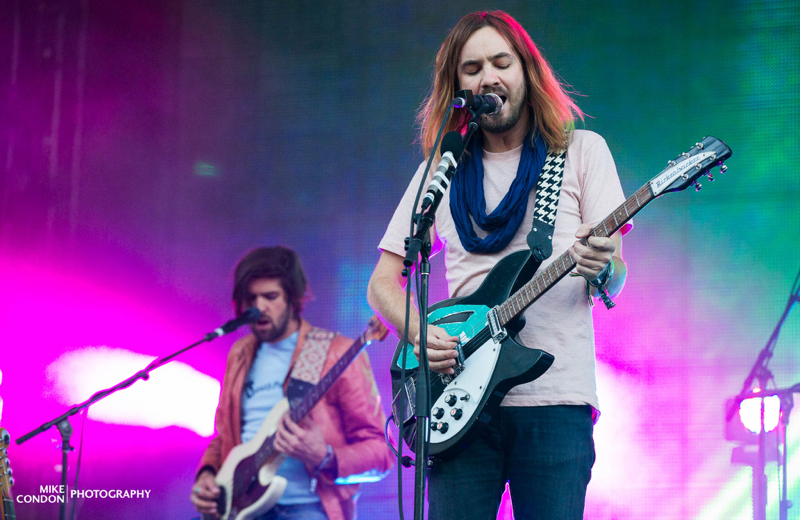 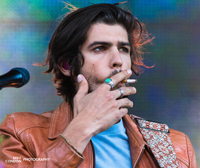 Van Etten’s earnest performance led into the anticipated Tame Impala’s set. Their sound covers the spectrum from Beatles-esque psychedelic rock to foot thumping grunge. Across all three days, they were the one link between the variety of musical souls that attended the festival; they were the act to see or have seen, playing tunes off old and new albums, including their most famous hit “Elephant”, the first song of the night that had the crowd grooving.

Fresh off a Grammy win for Artist of the Year, Beck launched into a nostalgic performance designed for the former ‘90s tweens that had come specifically to see him on stage. There was some buzz about his set; his newest album, Morning Phase (QRO review), earned him the Grammy win. Would he strictly play from the new album or give the people what they want and play the hits? Not one to disappoint, Beck led with “Devil’s Haircut” and played a set loaded with classics and very lightly peppered with newer songs. Those who have waited fifteen or more years to see Beck had quite the nostalgic experience. 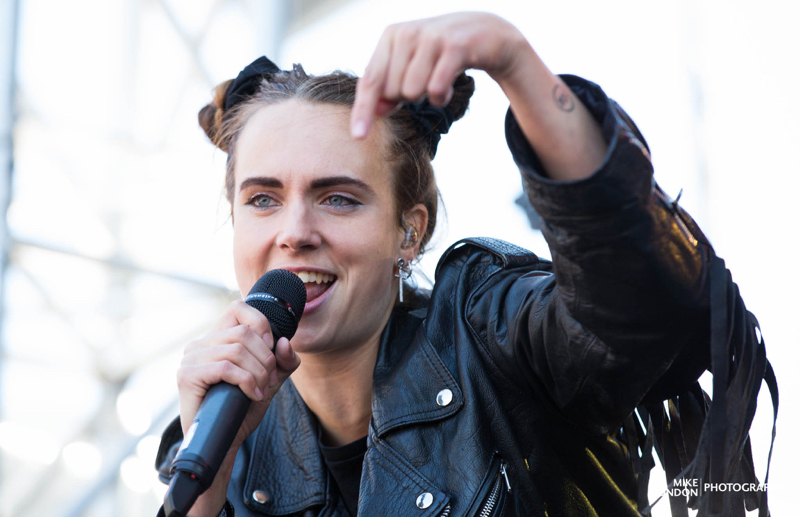 Day Two saw a much bigger crowd and had a somewhat curious lineup, from Welsh disco queen Marina & The Diamonds to hip hop gods Run the Jewels to laid back rocker Ben Harper. Local band Krill began the day with their angsty rock anthems, followed by DMA’s, a poppy band with a ‘90s throwback flair that set the tone for the rest of the day. Danish songstress MØ came out next sporting a leather jacket and played a set of solid pop songs, and she danced fluidly across the stage while backed by two drummers. Her set was vibrant and concluded with a mellow version of the Spice Girls’ “Say You’ll Be There”. 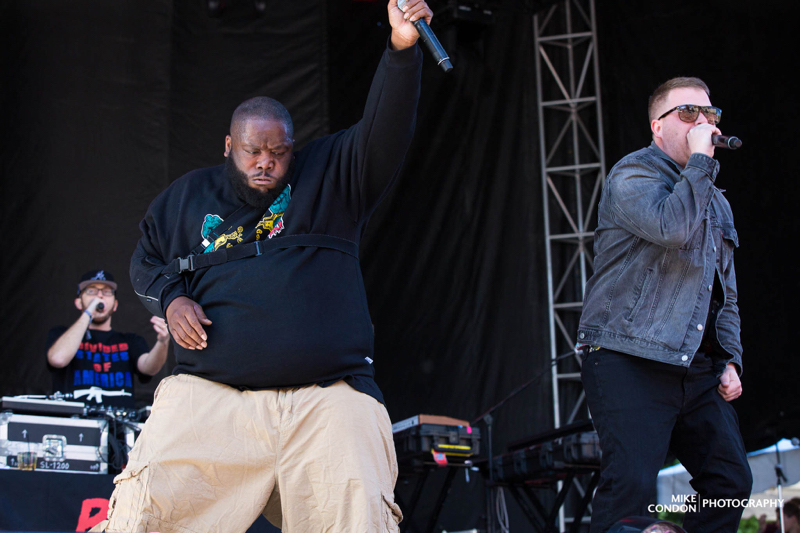 Run the Jewels came next, another highly anticipated act, and performed rap tunes that regale against misguided politics & celebrate personal independence. This is not a group known for holding back, and though they played the tamer versions of their songs, security was aggressive and tight during the performance. This was uncharacteristic of the festival and didn’t stop the crowd from enjoying the trio; it only made the crowd more devoted to the experience, which was passionate and fun. 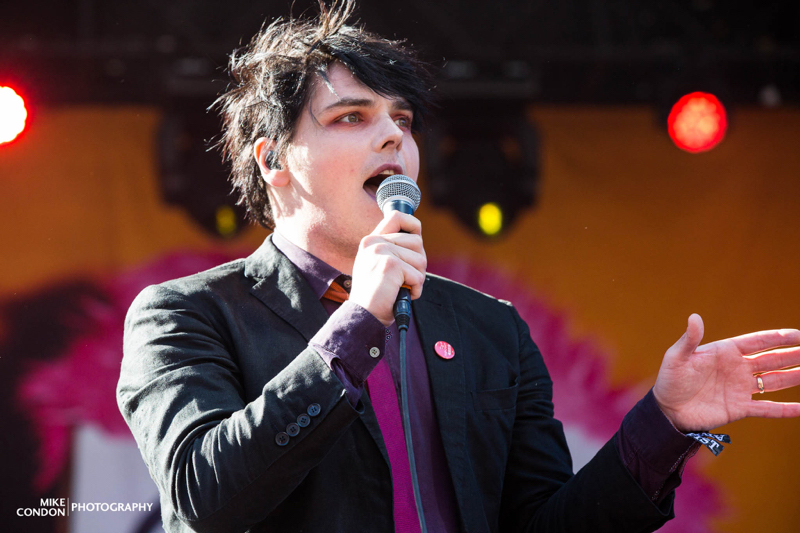 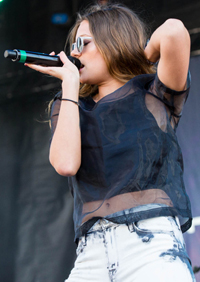 Like a gypsy from outer space, Tove Lo entered, and right away was highly engaging, speaking with the audience as if we were old friends. A pop artist from Sweden, Tove Lo called on the crowd to swing their shirts in the air during her song “Talking Body”, and she made her signature move of flashing the audience, causing a massive cheer across the Plaza. Up next was My Chemical Romance frontman Gerard Way, a strange addition to the mix, who played a bluesy-rock set that was sprinkled with uncomfortable improvisational moments. Way faced a restless crowd that contained just a few devotees, and after a couple songs in, the audience gravitated to the red stage to wait for Marina & the Diamonds. 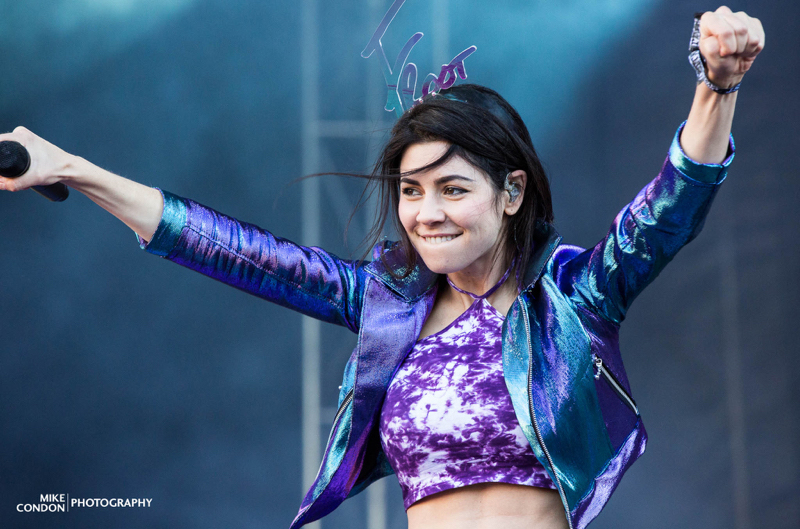 Having first performed at the original Boston Calling in 2013 (QRO photos), Marina & The Diamonds returned to the city to kick off her American tour to support her latest release, Froot. Marina’s positive energy started the evening portion of the festival off right and the band played a set of pop songs that everyone could dance to. They played new and old favorites to appeal to every Marina devotee and it was an empowering performance that celebrated fun, life, and self-acceptance. 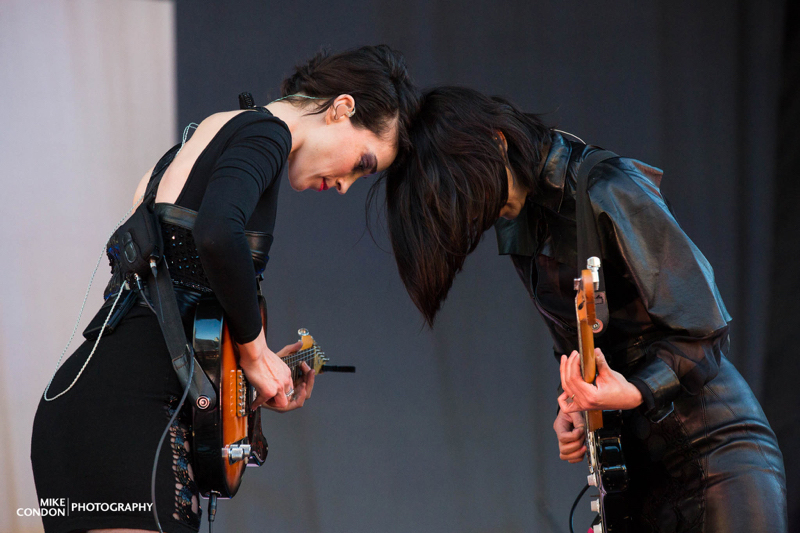 You haven’t truly seen what it means to ‘shred the guitar’ until you’ve see a performance by Annie Clark of St. Vincent (you might think you have, but you are wrong). Strutting across the stage like a futuristic robot referenced in her latest album, St. Vincent (QRO review), the union between Clark’s voice and her guitar seemed more like a museum showcase than a rock and roll performance. The set consisted of songs from St. Vincent, with an emotional performance of “Cheerleader” off Strange Mercy. Clark won this year’s Grammy for Best Alternative Music album for St. Vincent, and this was the perfect avenue to demonstrate grueling, technically stellar music, sparking head banging and cheers from an audience that seemed to worship Clark. It takes intense focus and skill to crowd surf and while playing an electric guitar with your teeth, and that’s precisely what Annie had as she finished out her set. 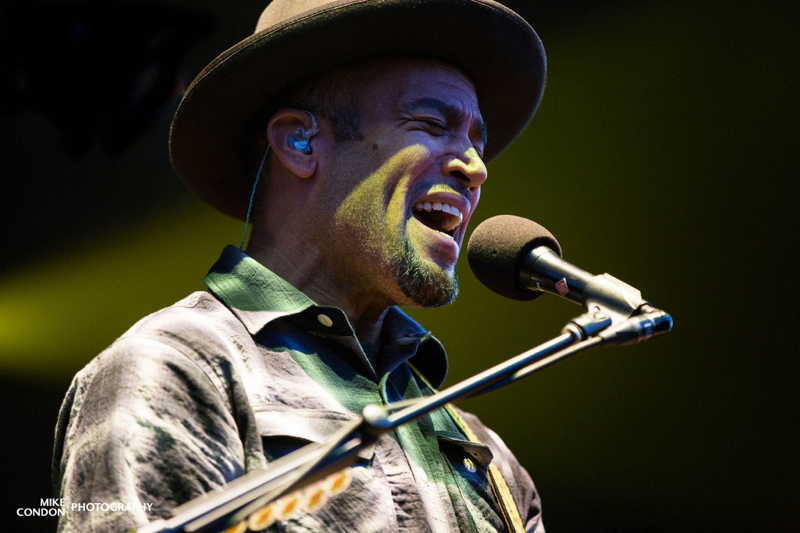 No stranger to the festival circuit, Ben Harper & The Innocent Criminals sweetly serenaded festivalgoers as the sun set over City Hall Plaza. They dove right into a combination of deeper tracks from their discography, playing hits like “Diamonds On the Inside” and “Steal My Kisses” that carry that mellow crooning that complements nearly-summer nights. A break from the pop-heavy acts of the afternoon, Harper fans crowded round to sing along, dance a little, and ease into the night. 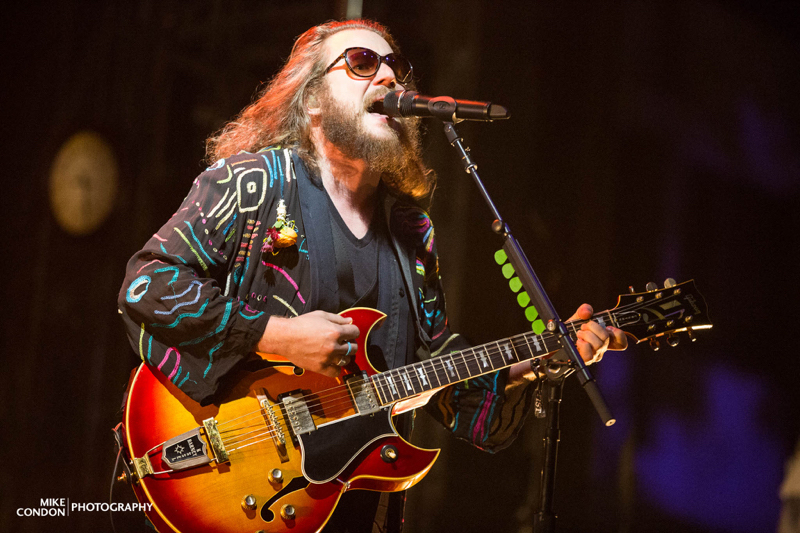 The windy night rolled in and the crowd loomed large at the JetBlue stage, waiting for the final act of Saturday night, My Morning Jacket. The indie rock/alt rock/southern rock/et cetera rock group, known for constantly evolving their sound, lulled City Hall Plaza into the night with a furious jam session. Fans celebrated the luscious sounds of MMJ’s newest music and relished in the old favorites. Although they may not have appealed to all attendees, the crowd filed out of the plaza buzzing about the experience. 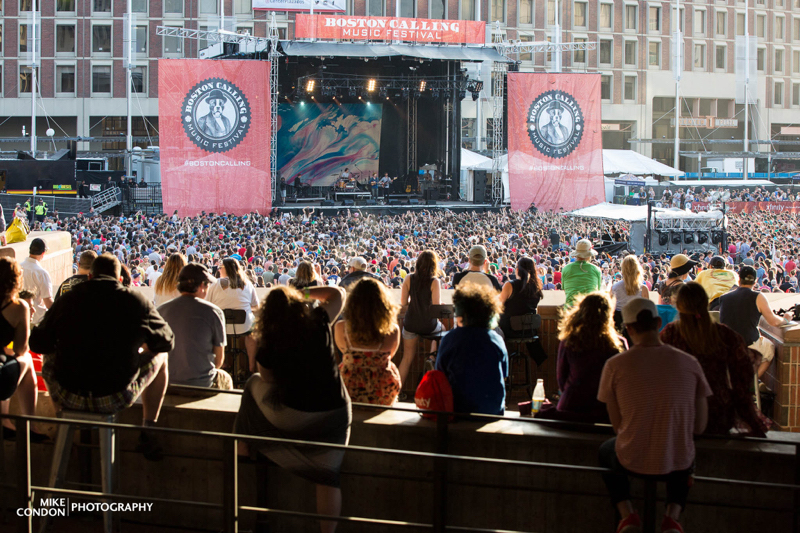 Ah, Day Three, the warmest of all days. Sticking it out on a 90+ degree day is a true testament to how much one actually loves music. The Ballroom Thieves started Sunday’s festivities with a pleasant set of angsty bluegrass rock. The local band was followed by bubblegum pop darling Halsey, who spoke of her underwear and nipples in between songs and then demanded a cigarette from her stage crew. Her voice sounds well travelled for a new artist, husky but golden at the right moments. Even though her spunk set a specific tone for the afternoon, it was broken for just a moment as lackluster Ilovemakonnen took the stage. Amidst sound issues he gave a nearly inaudible performance in which many left the scene to wander in search of restrooms, food, and beverages. His set was short and enjoyable by few. 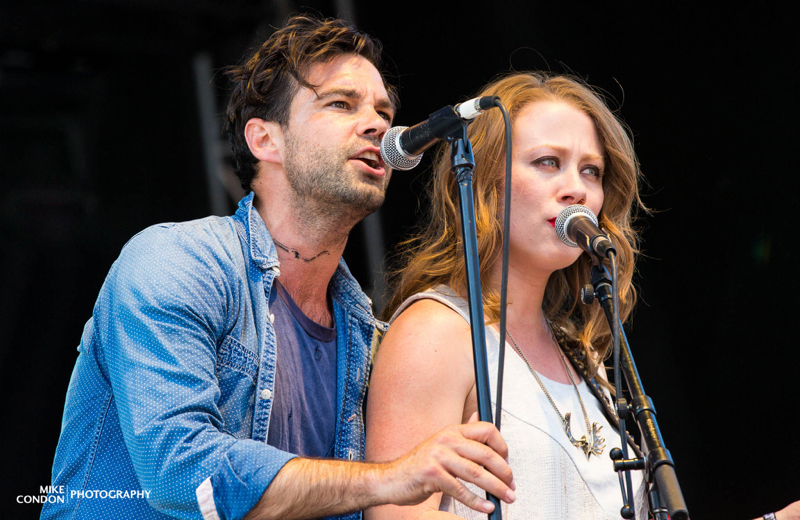 The Lone Bellow played a poetic, intensely felt set, with singer Zach Williams’ vocal chords about to pop right from his neck. A true example of what passion for artistry looks like, The Lone Bellow played their heartbreaker of a song “Then Came the Morning” with a strength and intensity that could rival that of Etta James herself. Their music is a showcase for the union between poetry and music, and though they are often classified as a country band, their sound is a total mélange of classic rock, soul, bluegrass, pop & indie rock. Despite the emotionalism of their sound, they were fun and upbeat and had the full attention of the audience. 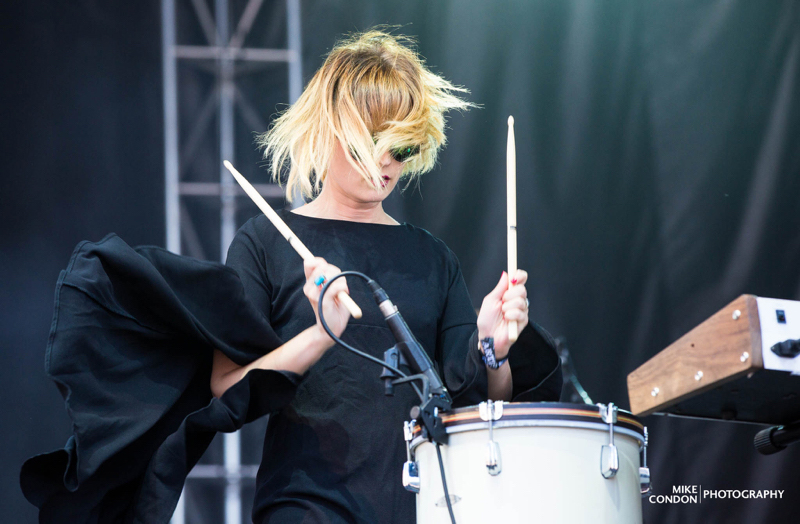 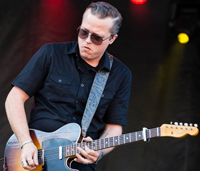 Last minute replacements for Chet Faker, Lucius was next on the red stage. Two pixie-like BFFs, these ladies move with a practiced and fluttering synchronicity, belting out dreamy rock tunes and fiercely pounding snare drums. While they weren’t exactly a standout performance and sang one of many happy birthday tributes heard throughout the weekend, they were the perfect dose of ambient rock and roll to keep the energy up and folks dancing. A more dramatic break in the nostalgic pop and grunge sounds of the weekend, Jason Isbell and his band played a classic country set, his vocals fiercely ripping across the plaza. Although a questionable addition to the lineup, Isbell’s talent and dedication to and mastery of his craft made for a quality scene. 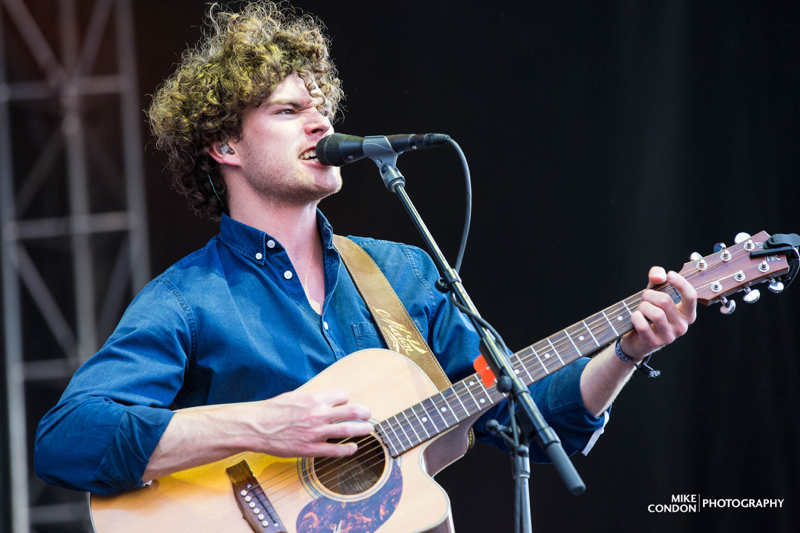 Vance Joy, Australian singer/songwriter, unfortunately played to an incredibly rude crowd that was too impatient for his sound. Fans of Joy held down the fort in the audience but their appreciation wasn’t enough to mask the side conversations or hide the guy giving Joy two thumbs down throughout the performance. Joy’s fans worked hard to make him more than a one-hit wonder, but the crowd’s collective excitement waned until he played radio hit “Riptide”. 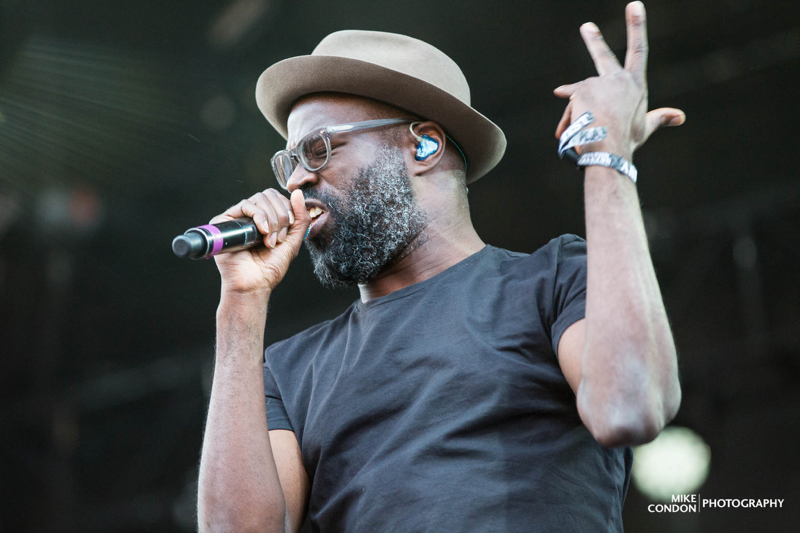 Quirky rock group TV On the Radio played through the heat fueled by their passion for their art, lead singer Tunde Adebimpe belted out their hit “Happy Idiot”, leading into ferocious rock set. 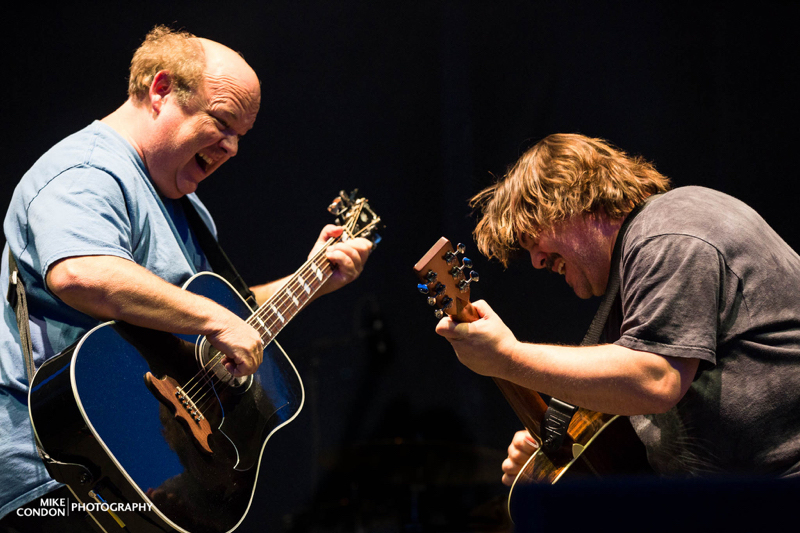 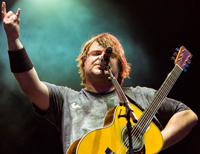 Tenacious D drew the second largest crowd of the weekend, drawing old fans and new and a whole lot of those who had never heard of the group and therefore had no idea what they were getting into. The boys of Tenacious D were truly entertaining and just plain fun. Jack Black’s energy was entirely unmatched as they played a range of classic rock to heavy metal, and gave a spoken tribute to Pixies, acknowledging the influence of the band on many of today’s artists. 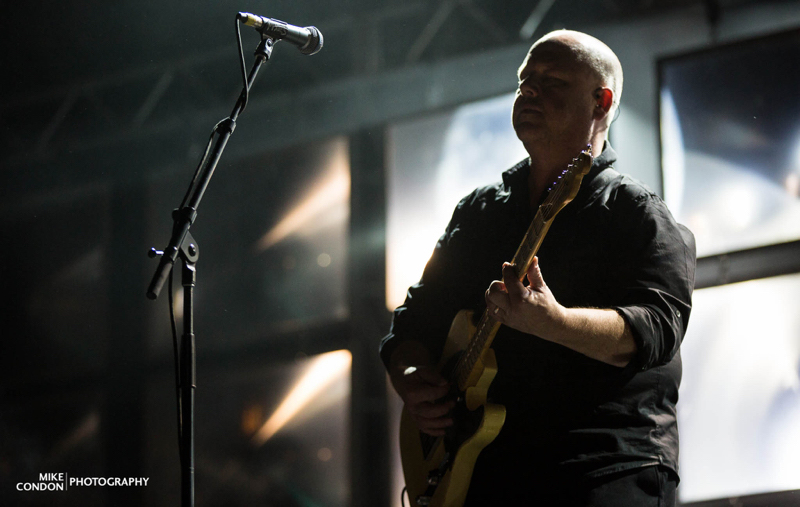 Pixies closed the festival with a ferocity not yet seen in this spring’s festival. Sounding possibly better than ever, they played fan favorites with the anguish and precision they’re known for. Jack Black was right in saying that so many bands wouldn’t have the sound they do were it not for Pixies. They showed off the sound that influenced ‘80s and ‘90s era acts like Nirvana with classics “Where Is My Mind” and “Here Comes Your Mind” and raged through an intense and fulfilling set that capped off the weekend.