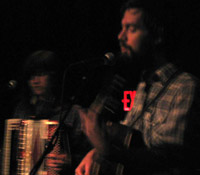 On Saturday, December 5th, anyone expecting to find a small crowd at Union Pool (QRO venue review) in Brooklyn the night of Bowerbirds’ performance was certainly in for surprise.  The venue was so full there was hardly any space to even bop ones head along to the music.  But as uncomfortable as one may have been, all was forgiven as soon as the performances began.  Bowerbirds gave a phenomenal performance with their heart-felt and romantic folk tunes, leaving a large and highly engaged crowd memorized.

Click here for photos of Bowerbirds at CMJ 2007 in New York, NY in the QRO Concert Photo Gallery

The show began with an opening act from singer/songwriter Sharon Van Etten (QRO album review).  Van Etten allured the crowd with sentimental compositions like “For You”, a love song about waiting for a lover.  She carried the crowd with her beautiful angelic vocals singing, “I wish I knew”, a graceful tune that could bring tears to one’s eyes.  Sharon received a lot of response from fans.  Some cheering her on after every piece, others shouting, “I love you Sharon.”  The Brooklyn-based artist was the perfect fit to Bowerbird’s celestial folk melodies. Bowerbirds opened up with one of their signature songs, “Hooves”, from their previous album Hymns for a Dark Horse.  Then they excited the crowd with more energetic songs like, “Chymes”, from their new album, Upper Air (QRO review).  Guitarist and singer Phil Moore’s passionate and vivid vocals energized the crowd leaving everyone singing along, and in awe.  Moore and Beth Tacular touched the audience with “Beneath Your Tree”, a deeply poetic song about passionately loving someone.  You could feel the band feeding off of the audience’s energy as they sang the fervid lyrics, “And the moon will rise in the evening / And I’ll fall to sleep beneath your tree / And the wind will howl through your leaves and serenade me.”

The show ended with the group performing the popular “In Our Talons” with Tacular on the accordion, Moore on acoustic guitar and the two humming, “deet-deet-deet-deet-deet-deet-deet-deet!”  Fans were hungry for more and shouted out for one last song.  Bowerbirds came back out and satisfied the crowd with yet another.  The group undeniably touched fans with their captivating performance.  It goes without question that, if it were up to the crowd, Bowerbirds would have performed for hours more.