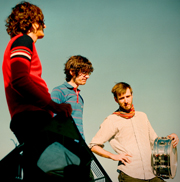 For a band whose most recent recording, Phosphorescent Blues, is slathered with ornamentation, the solitary presence of singer-guitarist Martin Crane on the Doug Fir stage in Portland on Friday, January 22nd was an intriguing proposition.  As it appears on Phosphorescent Blues, “We Understand Each Other” is a brick of reverb-heavy piano cut through with aimless noodling that suggests faltering confidence and a wavering sense of purpose.  In its recorded version, it is the track that would least serve the band as an introduction.  On stage at the Doug Fir, though, with no piano in sight, Crane treated the song like a confession and manifesto.  Although the remainder of the set would feature the rhythm section of bassist Paul Price and drummer Andy Beaudoin, “We Understand Each Other”, with its sparseness and modesty buoyed by Crane’s apparent confidence in the song at its most basic structural level, set a tone for the night that was sustained beautifully as the group ran through highlights from Phosphorescent Blues and a batch of promising new compositions.

Click here for QRO’s review of Brazos, with White Denim, at Mohawk in Austin, TX on October 24th, 2009

Brazos’ attention to detail is apparent in their recorded work and to the studied eye it was apparent at Friday’s performance.  Of course one knows that the cloth draped over Crane’s knee-high amplifier is serving some tonal purpose, and that Beaudoin’s switching between modern and jazz grip will subtly alter his attack, but while these details may well have origins in fussiness, their integration into the band’s musical language is complete.  Techniques that could seem gimmicky from other bands – the martial drumming of Phosphorescent Blues highlight “Tell”, for instance – were made to feel as natural as a new breath.

Although the imagery employed by the group – both in Crane’s lyrical concerns and Beaudoin’s percussive interest in fertility symbols – is far earthier, Brazos’ more-with-less approach suggested, at times, a glamour-free Strokes.  Like that group or their common forebears in the Velvet Underground, Brazos readily reversed the typical roles of bass and guitar, allowing Price’s bass to take a melodic role while the guitar sketches the chords in hypnotic holding patterns.  Only two guitar solos were taken in the course of the set, the first a succinct, surf-influenced surprise and the second a set-closing scorcher, offering a nice touch of excess to cap off a restrained, purposeful set.  Although it is hard to imagine that they would see it this way, Brazos left the stage having gently thrown down the gauntlet.

Click here for photos of White Denim at The Cockpit in Leeds, U.K. on May 24th, 2012 in the QRO Concert Photo Gallery

Click here for photos of White Denim at Spaceland in Los Angeles, CA on November 2nd, 2010 in the QRO Concert Photo Gallery

Click here for photos of White Denim at a CMJ pre-party at Rebel in New York, NY on October 19th, 2009 in the QRO Concert Photo Gallery

While Brazos presented their music stripped of accoutrement, White Denim took the opposite tack and used the performance as an opportunity to let their songs spiral into far-out galaxies.  Listening to the group’s recent album, Fits, it is no surprise that White Denim would be tempted to stretch out in the live setting.  Though Fits is comprised wholly of tight two-and-three-minute bursts of music, each one contains lightning flashes of ideas that could potentially lead the musicians into far distant realms.  Like most bands that put up a frantic front, White Denim on record is actually an exercise in self-control.

Fits, as it turns out, is totally inadequate preparation for the live experience of White Denim.  Although the hugeness of the sound can be off-putting, particularly in a club setting, the group’s energy and virtuosity is to be admired.  While James Petralli probably didn’t need to drown his voice and guitar in reverb – the group would have sounded plenty big without it – and no bassist should feel the need to employ a third finger on his picking hand – you can’t not be overdoing it at that point – it is a rare thing to find a band on the indie rock circuit playing all-but-uninterrupted hour-plus sets of psychedelic exploration.  That it is exhausting to watch is probably part of the point.  The live White Denim experience is about exhaustion of their material, exploration of every melodic corner and there is something thrilling about watching each spent husk be discarded, even as you mourn the loss of what was once a perfect little kernel of restraint.

Beat Radio : Safe Inside the Sound