It was more than just Chill with Brendan Canning.... 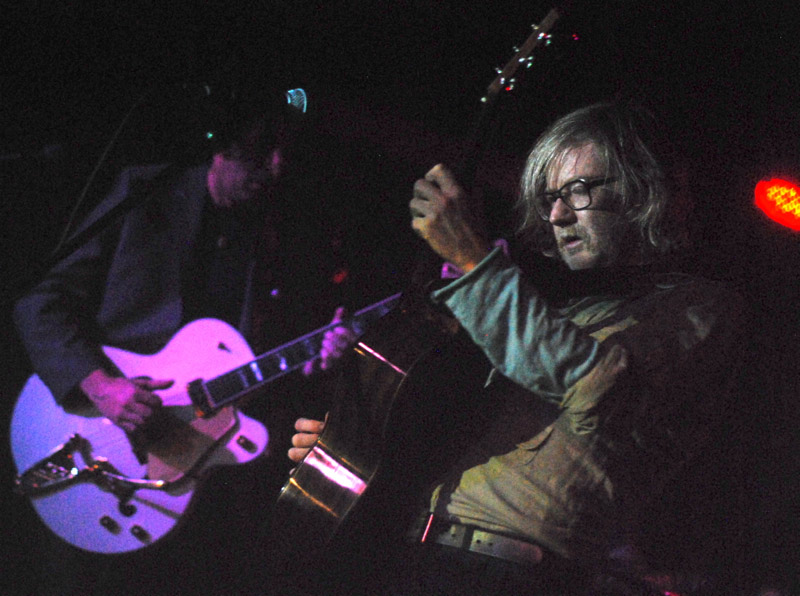 Click here for QRO’s interview with Brendan Canning in 2008

While Brendan Canning isn’t ‘the quiet one’ in Toronto’s Broken Social Scene (QRO spotlight on) – that’d be never-vocalist Charles Spearin (QRO interview) – he’s certainly not ‘the loud one’, as that’s guitarist Andrew Whiteman (QRO interview), and he’s not the frontman, Kevin Drew.  Last year’s solo Canning release, You Gots 2 Chill (QRO review), was a quiet and yes, Chill, record, relaxing and natural in the utmost.  But how would it play indoors, in the depths of winter, in the big city?  Well, Canning & co. had the chill when they played New York’s Mercury Lounge (QRO venue review) on a chilly Friday, January 24th, but also brought the rock, the jam, even Drake…

For a tour off of You Gots 2 Chill, his only truly ‘solo’ release, the show surprisingly wasn’t just songs from Chill.  It also only had one BSS piece, and none from other Canning projects like 2012’s Cookie Duster (QRO album review).  Instead, it was new song “Vibration Walls” that shined strongest early on, over Chill’s “Never Go To the Races” or even a great rendition of BSS’ “Handjobs For the Holidays” (also surprising?  No songs from Broken Social Scene Presents: Brendan Canning’s Something For All of Us… – QRO review).  Chill’s “However Long” was great (so great, in fact, that after the instrumental end Canning remarked that his band “don’t even need me…”), but before it he did a completely not ironic or sarcastic version of “Hold On, We’re Going Home” by superstar rapper (and also Toronto native) Drake.

The back end of the set was replete with new material, possibly because the Chill tour had been delayed from last fall thanks to the government shutdown holding off his visa.  “Once, I Was a Runner” was a relaxed, natural jam, and before the following “Marika”, Canning remarked, “If you like The Grateful Dead or The Everly Brothers, you might like this one…”  Thankfully, “Marika” wasn’t a giant jam, but just a fun country-bop song (like The Dead songs that you actually like).  Who knows if that’ll get him on the jam band festival circuit like he joked, but it also served as one of the louder pieces on what wasn’t the quiet night that you were expecting.  And after a particularly loud & epic “Turn Again” (you can’t be in BSS and not know how to do epic), Canning did a sweet solo instrumental to close.

Canning also provided some nice in-between song banter, noting that at early shows such as this one, people aren’t as drunk (and then mentioned he drinks tequila, with which of course someone bought him a shot), going jam band, on how to use a capo (was corrected by a fan up front), getting everyone to take a deep breath, and more.  He was ably backed up by Steve Singh (who also recorded Chill with him) on guitar, bassist Gavin Henderson, drummer Graham Jones, guitarist/back-up vocals Julia Crawford, and keyboardist Greg Calderone.  Calderone was stuck in the darkness on the far side for most of the night (despite being, according to Canning, the handsomest one up there – ‘handsome’ must mean he wasn’t counting the very pretty Crawford…), though it wasn’t that bright even in the ‘bright areas’, thanks to the only lighting coming from a film projection (which was actually brighter than most times that bands are ill-lit by a film projection, though the brightest spots were the backs of the heads of the fans up front).  For such a Chill record, it was a great live experience in every direction.