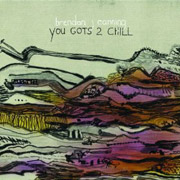 As Broken Social Scene’s (QRO spotlight on) hiatus continues, the member of the sprawling alt-rock collective to most use the time has been Brendan Canning.  Long the nice guy sideman to BSS frontman Kevin Drew, Canning revived his pre-BSS side-project Cookie Duster last year in When Flying Was Easy (QRO review); Canning’s also coming off of making the soundtrack for the already-infamous Lindsay Lohan/Brett Easton Ellis film, The Canyons.  But he delivers the most of himself in his fully solo You Gots 2 Chill.

While the title (and its spelling) is mostly a joke, this is definitely a ‘chill’ record.  It’s also not Broken Social Scene by another name, like his & Drew’s respective ‘Broken Social Scene Presents’ albums, Spirit If… (QRO review) and Something For All of Us… (QRO review).  Instead, Canning goes low-key and natural – very low-key and natural.  He never raises his voice above a hush on Chill, and his instrumentation likewise is quiet nearly throughout.  And while there are indietronic hints in the background, the release is much more woodwind than laptop, apple tree more than Apple MacBook (and even some of the tech is decidedly non-current, such as the two sub-minute instrumentals recorded on answering machines, “Once a Lighthouse” and “Long Live Land Lines”).

Anyone looking for the revival of You Forgot It People will obviously not find it on the next-in-line alphabetically You Gots 2 Chill (though BSS did recently do that seminal breakthrough record at their label’s anniversary festival – QRO photos), nor is it a BSS sibling like the ‘Presents’ releases.  Instead, Brendan Canning lies down in the fields of hushed beauty.