While it does not have the standout singles of prior Gaslight Anthem releases, 'Painkillers' is still a worthwhile record from a strong artist.... 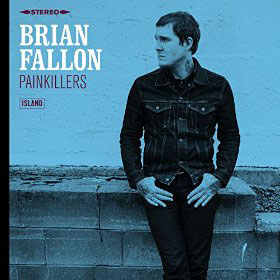 When the frontman for a successful group decides to release a solo album, there’s always the question of, “Why?” Why put out new music as a solo artist, or in a new side-project, instead of just sticking with your original band? Of course, sometimes it is just the act before going solo completely, or the rest of the band wasn’t available. Thankfully, The Gaslight Anthem frontman Brian Fallon doesn’t seem to be heading for the exit with his solo record, Painkillers. And even if it sounds very much like The Gaslight Anthem, that’s a still good thing.

Painkillers is a more stripped down version of The Gaslight Anthem, leaning towards the acoustic honesty of the Springsteen/Replacements vein. There is also definitely an upped country atmosphere, particularly with the roots revival saloon “Mojo Hand” or the world-weary closer “Open All Night”. But the primary aspect is the wistful look-back rock of songs such as the title track, “Rosemary”, and “Red Lights”.

While it does not have the standout singles of prior Gaslight Anthem releases, Painkillers is still a worthwhile record from a strong artist.