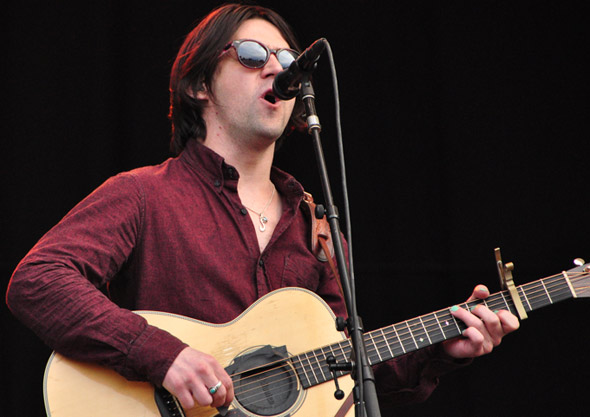 Click here for photos of Conor Oberst at Carnegie Hall in New York, NY on November 21st, 2012 in the QRO Concert Photo Gallery

Everyone has their summer getaway, the place they call home for three months out of the year.  Some have a house with a watering hole.  Others travel to far-off lands most only read about in books.  But for this correspondent, it was spending the last two summers riding the Long Island Expressway and the Brooklyn-Queens Expressway back and forth from suburbia Long Island to East River State Park.  Better known as Williamsburg Waterfront (QRO venue review) because of its gorgeous location overlooking Manhattan, artists from Belle & Sebastian to Simian Mobile Disco and Fucked Up (QRO photos) to Dirty Projectors (QRO photos) played there; the talent that hit the large stage was as top-notch as one could book.

And although I never stopped writing, did stop going to the Williamsburg Waterfront.  Didn’t notice it at first but as the summer progressed, but I started dealing with bouts of misery that simply could not be pinpointed.  And after long last, realized that not visiting the Waterfront might have been the reason behind it all.

And sure enough, I was spot on.  Taking advantage of the time before the holiday, I attended the Bright Eyes concert on Wednesday, August 31st.  And must say, the combination of talent and scenery was almost overbearing.

Conor Oberst and co. hit the stage just before 8:00pm with their hit from Cassadaga (QRO review) entitled “Four Winds”.  The band’s alt-country sound from the album was such a welcome to the abundant crowd the crowd, who had followed Bright Eyes from his beginnings as an indie-folk superstar.  And Oberst knew this all too well, playing some of his singles (he followed “Four Winds” with “Bowl of Oranges”) from his large discography.

But what was surprising was how deep into the vaults Oberst’s set list went.  From I’m Wide Awake, It’s Morning gems “Landlocked Blues” and “Another Travelin’ Song” to the ten-minute epic “Let’s Not Shit Ourselves (To Love and to Be Loved)”, Oberst played for every type of Bright Eyes fan that night.  Dr. Dog and Real Estate opened.

Encore
Let’s Not Shit Ourselves (To Love and to Be Loved)
Road To Joy
One For You, One For Me