British Sea Power have always hovered at a sort of ‘cult’ status, beloved by their loyal fans, but not pushing through to that many new ones.... 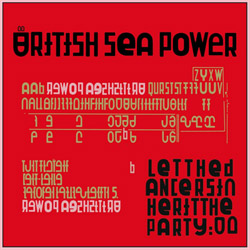 It’s now past a decade since British Sea Power broke through with debut full-length The Decline of British Sea Power, and they’ve always hovered at a sort of ‘cult’ status, beloved by their loyal fans, but not pushing through to that many new ones. The knock has been that the band kind of always does the same thing, expansive epics with some swaying, atmospheric pieces. That still holds true on Let the Dancers Inherit the Party, but is still the BSP that you’re looking for.

After the sub-minute “Intro”, most of Dancers is nicely British Sea Power, but all told, a little expected. Songs like “Bad Bohemian” and “International Space Station” fit into their big sound, but had hoped for more from song titles like those (BSP is a band who has sung about the Czech assassination of Nazi S.S. leader Reinhard Heydrich in “A Lovely Day Tomorrow”). The record does lift up, further in, with strong pieces such as “The Voice of Ivy Lee” and “Saint Jerome”, if not meeting the heights of hit Decline single “Remember Me”. The back half also has the swaying, resigned BSP in “Electrical Kittens” and “Praise for Whatever”, but the standout is the penultimate wistful expanse “Don’t Let the Sun Get In the Way”.

British Sea Power ran a crowd-funding campaign to put out Let the Dancers Inherit the Party, with fans paying in advance for a four-CD deluxe set of outtakes, instrumentals, and more. BSP may always be the kind of act who is better on the likes of Kickstarter than major labels, but hey, that’s worked for Mystery Science Theater 3000 (stuck on their own “Space Station”…).