British Sea Power were "All In It" at Gloucester Guildhall.... 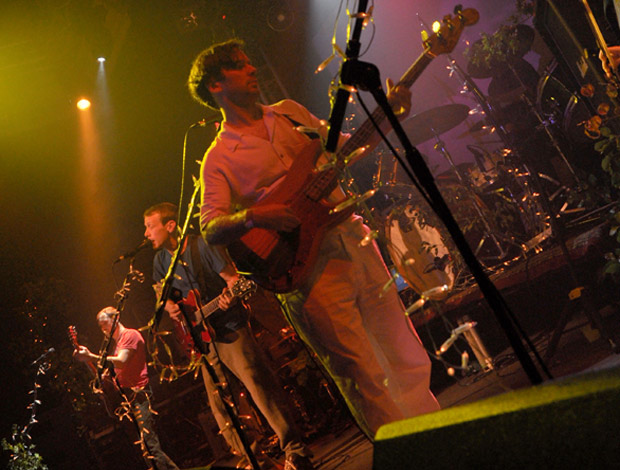 British Sea Power (BSP) dropped by the Cotswold town of Gloucester on August 17th to play the Guildhall in between the summer circuit of various festivals.  The venue itself held enough quirky character, but looking a bit lost sandwiched between the usual shops to be found amongst pedestrian areas in large towns.  Further down the road, ‘the strip’ boasting wall-to-wall bars and clubs started to fill out with the usual Saturday night ‘dressed to impress’ partygoers looking to fill themselves with ethanol and certainly over keen fans of alcohol, as BSP themselves refer to in “Waving Flags”.

Inside this old building, dark wood panel’s run the length of the narrow hall adorned by framed pictures of various acts that had once played this snug 400-capacity venue.  A room to the left off this hall acted as a bar, almost resembling someone’s living room, but was packed with people milling around with drinks.

The hall itself was dark with dark wooden suspended floors, which would soon be springing to good effect under the sell-out crowd.  The generous stage was, by the time people were entering, already set up and in place ready for the evening’s proceedings.  Various choice selections of foliage, plants and greenery sprouted out from various parts of the stage softening edges of speakers and entwined around mic stands with fairy lights to match. 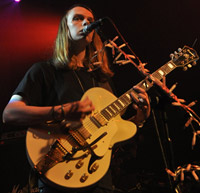 First on stage were fellow south coast rockers Dolomite Minor who arrived from Southampton.  The twosome on guitar and drums managed to provide a tight set of tunes that would seem out of place within the Seattle scene or alongside garage bands like Band of Skulls and Raconteurs.  Joe Grimshaw, with long limp hair, managed to lead from the front to the receptive crowd who had already gathered, without signs of nerves or phased.  Credit to the Southampton rockers as the sound produced was something which could hardly be likened to a BSP resonance.  The reverberation and noise produced through Max Palmier’s thudding rhythmic beats drove the volume to ear aching levels and there would be no easing off until the last track. 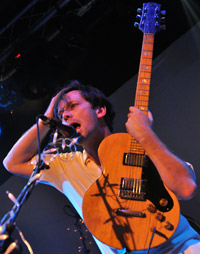 The support act left the stage and the stage was readied as the room filled and Paul Banks’ “The Base” played in the background and people started swaying, some in attendance also bearing branches and leaves, and one enthusiastic member of the audience who had a seagull (fake… no animals were harmed as part of this show… certainly would not be the BSP way, “Loving Animals” and all) on the end of a pole, swirling above the heads of the audience.

BSP have just released their sixth studio album, Machineries of Joy (QRO review), which it is strongly argued and upon the showing of the tracks from this album tonight, those arguments seem justified, as new tracks seem to have pushed BSP into a far more complete band who have enhanced live shows to new heights with songs that can be beautiful, tender and then come back with punchy catchy songs to lift any mood.

The Brighton six-piece began proceedings with the title track from the latest record and from the start, the temperature raised several notches as the audience were in the mood to make sure this would be a special night for both band and those who had travelled in. 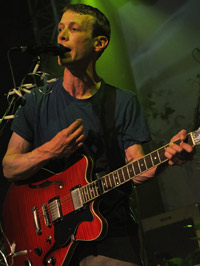 Frontman ‘Yan’ Scott Wilkinson (QRO interview), dressed in cool white baggy trousers, led his troops across a selection of the bands ten-plus years of back catalogue with the Yan breaking into spells of contortion on stage and screaming down his mic like a patient on day release from a secure unit, no more so than the “Apologies To Insect Life” from their 2003 debut album, The Decline of British Sea Power, and the crowd loved it as the moshing in front of the stage grew and with a suspended floor, it meant that everyone was forced to take part bouncing as though on a trampoline.

Bass guitarist Neil ‘Hamilton’ Wilkinson at points in the evening took over vocal duties from his brother and with a couple from the new album.  “Loving Animals” started as an easy going song before breaking into an altogether crazy psycedelic mix, further proof of the band’s creative force and wish to experiment and try something different. 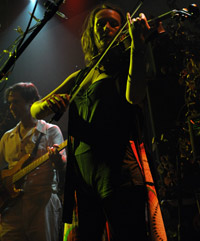 BSP have a knack of moving at ease through the gears and some level of calm followed, with Hamilton leading on “When a Warm Wind Blows Through the Grass”, which at its finale brings in swaying harmonies from violinist Abi Fry that sweep you along with the rolling repetitive hypnotic guitar notes from Yan and lead guitarist Martin Noble throughout the song.

Sandwiched in the middle of the set are the compulsory tracks from BSP’s 2011 album Valhalla Dancehall (QRO review) and the rousing tracks of “Waving Flags” and “No Lucifer”, with the whole hall joining in with the football styles chants of “Easy, easy, easy!” and the vegetation and branch-laden audience leapt around, bringing an already hot and humid room to sweltering temperatures, with the most cool laid back member of the audience perspiring away. 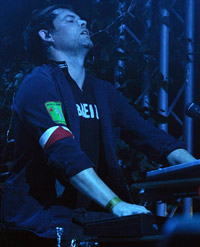 There was a break from the set list as the band gave into the audiences’ relentless requests for “Radio Goddard” from the new album – what other band can claim this popularity when most audiences wail away for old classics, again further suggestion that BSP are just becoming better and better.  Anyway, the song started all over the place with Yan having to bring things to the start again, much to the amusement of the group and the packed hall.  Once going, everyone was treated to a blissful elegant and altogether beautiful creation with Fry’s backing vocals and the stubbly Phil Sumner with his echoing trumpet notes giving the air of a colliery band.  Wondrous and brought the biggest cheer of the night so far. 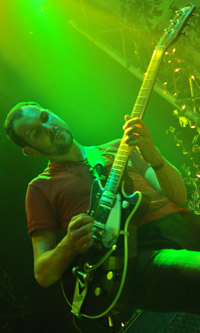 Yan then introduced “Monsters of Sunderland”, and hinted that this was likely to be the next single from the band.  However, the band were forced to wait as the frontman kicked off his shoes, complaining about the heat to his feet, but once up and running was a pounding sprint to its finale, giving Martin Noble an opportunity to stretch his fingers around the fret of his guitar and Matthew Wood dictating the pace pounding the tempo on his drums.  Old favourites “Remember Me”, a 2001 release, and the rousing let yourself go of “Spirit of St. Louis”, with Yan showing remarkable talent as he managed an impressive lengthy handstand, waving his feet in a clapping action, probably to get some audience participation, but possibly as relief to air his sweaty feet.

The band finish the set with another gentle track from Machineries of Joy – “What You Need the Most” is a song about a girl possibly, but likens her to a “Pyrex dish.”  It works.

BSP returned to the stage for an extended encore with “Carrion” from the debut album and a breakout of complete mayhem as two gigantic bears (persons in large bear consumes) ripped into the audience to celebrate and enjoy the finale of another great show by British Sea Power to leave everyone looking forward to future releases and madcap ideas by one of Britain’s finest bands.  “All in it”?  Absolutely, happy to be.

encore
Carrion
All In It
Rock in A
‘Latchalose’ or ‘Senna’