<img src="http://www.qromag.com/wp-content/uploads/2008/05/britishseapowermay11.jpg" alt=" " />British Sea Power made their landing in Brooklyn, and claimed the borough for Her Majesty’s empire with possibly the greatest show Music Hall has ever...

The Brighton band became known throughout England for their incredible live performances, and that showmanship came across the pond full-bore.  With the kind of energy that could power a dreadnaught, British Sea Power mastered all of Music Hall in Williamsburg on Sunday, May 11th.

Touring on the back of their third full-length, Do You Like Rock Music? (QRO review), British Sea Power have been storming the states since South by Southwest (QRO Festival Guide) in March, hitting everywhere from the middle of Oklahoma (QRO Norman Music Festival Recap) to Late Night with David Letterman (QRO Indie on Late Night TV).  But this journey hasn’t worn them down – if anything, the band was as energetic as they’ve ever been, and delivered a show that won’t be forgotten.

The band opened up with Rock Music’s expansive and pressing “Lights Out for Darker Skies”, setting things on fire right from the get-go.  About half the set was devoted to Rock Music pieces, including the following “Atom”, which took the tempo up a notch.  Of the older pieces, the lion’s share came from their epic and incredible first record, The Decline of British Sea Power, starting with the almost post-rock “Childhood Memories”.  This melodic piece of space-rock traded some electricity for range, but it didn’t feel out of place in the slightest, as British Sea Power are able to deliver the expanse of post-rock with the energy of indie-rock.

Singer/guitarist/bassist/brothers Neil and Scott Wilkinson trade-off vocals duties (with the non-singing brother usually playing bass), and the band’s set lists are arranged so that there are mini-runs of two-to-four songs where one brother plays frontman, then the other.  While British Sea Power began their career with Scott in more of the driver’s seat, by the time of Rock Music, Neil has really come into his own as well, and that showed with his triptych.  The high and explosive “A Trip Out” was even more fun live, while “Down On the Ground” (also featured in their pre-release EP, Krankenhaus? – QRO review) played even more epic-pop.  Meanwhile, Neil got to show off his own Decline post-rock chops on the growing, but also catchy, “Blackout”.

British Sea Power are something of a ‘cult’ band, with a loyal and dedicated following, but what’s most remarkable is the width of their fan base, from Long Island teeny-bopper would-be hipsters to drunken louts – drawing the cream of musical-appreciating crop from all walks of life.  The front of the stage floor at Music Hall saw that divide literally, with the female-heavy house-right and beer belly-heavy house-left.  But it was the drinkers who had the keener foresight: after they shouted out the opening lyrics to Rock Music’s first single, “Waving Flags”, what do you think the band played?  (Of course, lyrics like, “Are you / of legal drinking age? / Of minimum wage? / Welcome in!” are bound to be popular with the soused, but it was a good call nonetheless…)

After that raucous number (which is actually about welcoming in Eastern European immigrants to the EU, especially Poles from the River Vistula…), British Sea Power tempered things down a bit.  First came Rock Music’s ocean waves instrumental, “The Great Skua”, then the frozen ocean ode, “Oh Larsen B”, from their second record, Open Season.  Like much of their sophomore LP, “Larsen B” lacked some of the fire of Decline, and that allowed the band to simmer the set down a bit.

Scott finished off his ‘water four-set’ with “Canvey Island” (it’s about a football club – that’s ‘soccer’ to you Yanks… – who lost their records in a flood in 1953), and the history-wistful piece was given an added energy live (akin to fellow ‘history post-rock’ Brits, iLIKETRAiNS – QRO album review).  Neil took over with Rock Music’s latest single, “No Lucifer”, and Music Hall literally shook with the crowd shout-a-longs of its refrain, “Easy!” (it’s actually the tagline of an old English wrestler, but the audience could smell what The Rock was cooking…).  He also hit up his own Open Season track, “True Adventures”, and like “Larsen B”, it was a somewhat softer palate-cleanser for the craziness that was to come.

And crazy did come, when Scott returned to lead vocals for non-album single, “Spirit of St. Louis”.  Maybe no piece best combines British Sea Power’s driving rock sound with its wide-open vistas, like Lindbergh hurtling across the Atlantic Ocean.  But it was the band’s final two numbers, a live rarity and a live staple, which turned everything up to eleven. 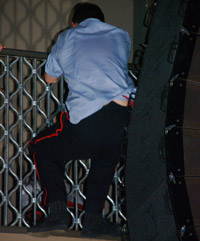 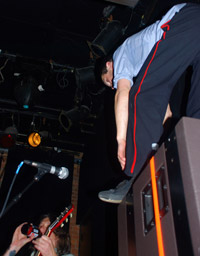 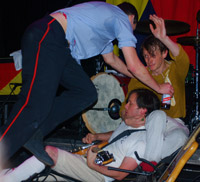 Scott introduced Decline’s “Lately” by saying that they hadn’t played it live in two years, but absence just makes the heart grow fonder for this epic, orchestral, amazing track.  He also said it was going to be their last song, but, in reply to the moans, added, “It’s at least twelve minutes long”.  However, he was wrong on both counts, as the band nearly doubled that length by adding on their semi-improvised, never-recorded, live classic, “Rock In A” (‘Encore breaks?  We don’t need no stinkin’ encore breaks!…)

This enormous amount of time allowed the band to go absolutely nuts on stage.  Viola player Abi Fry ran around the carpeted stage barefoot (actually, she was shoeless throughout the show…), while keyboardist/trumpeter Phil Sumner jumped in on guitar when lead guitarist Martin Noble was… indisposed.  You see, not only did the Red Stripe-swilling Noble crowd-surf (starting by launching himself onto the house-left drunks in front of him, who he’d credited with calling “Waving Flags”), but he then proceeded to do something Music Hall in Williamsburg (QRO venue review) has likely never seen before: he climbed on top of the house-left floor speakers, behind the suspended ceiling speakers, and grabbed the balcony’s side, climbing up the railing and into the balcony!  And then, just when you thought he’d disappeared for the night, he was climbing down from the house-right balcony onto the other side of the stage…

Maybe it was lax security, or a wild crowd (there were fans who were busted, though not thrown out, for drinking from a flask and smoking weed on the stage floor…), or who knows what, but British Sea Power ended the night crazy and out of control, with the three guitarists literally falling over each other (while Scott was still strumming).  With a band with as great a stable of songs like British Sea Power, there were going to be ones that were unfortunately missed (like Decline’s too-good-for-words “Remember Me”).  And it’s too bad that the band’s enormous stuffed grizzly bear, Ursine Ultra, “couldn’t get a visa” (methinks Stephen Colbert had something to do with this…), or that they couldn’t reprise, indoors, the t-shirt cannon from the Norman Music Festival (QRO photos).  However, it’s good to know that the group can play with any hand, and it was a night like no other, from a band like no other.