It is the right time for Britta Phillips to release her own material.... 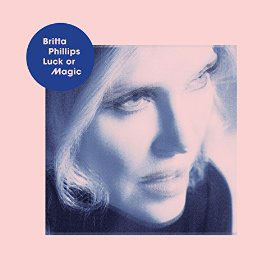 Britta Phillips first got notice when she joined nineties alt-dream outfit Luna as bassist, later marrying singer/guitarist Dean Wareham. After Luna wrapped, the couple went their own way as Dean & Britta (QRO spotlight on), releasing their own material and even composing for Andy Warhol’s 12 Most Beautiful… (QRO live review). Two years ago, Wareham released is own solo self-titled record (QRO review), though of course Phillips was in his band & on tour (QRO photos). Now Phillips takes her own step into center stage with her own solo Luck or Magic.

Admittedly, it’s a tentative step, as half of the songs on the album are covers, though none recent or that well known (The Cars’ 1984 “Drive” being the newest & most famous). Like Luna and Dean & Britta, Luck is a relaxed record trafficking mainly in beauty, though does show a shift more towards synthesizers (Phillips is hardly the first artist these days to do that). “Drive”, for instance, is made even more haunting by these tones, while the girl group Dennis Wilson piece “Fallin’ In Love” is given some modern shade. The original numbers, like opener/single “Daydream”, lean in the Francophile end of the pool.

After Wareham’s own solo record & the Luna reunion (QRO photos), it is the right time for Phillips to release her own material. While hardly overwhelming, Luck or Magic is beautiful.