The night was devoted to the intimacy of Brittany Howard in her debut on 'Austin City Limits' as a solo artist.... 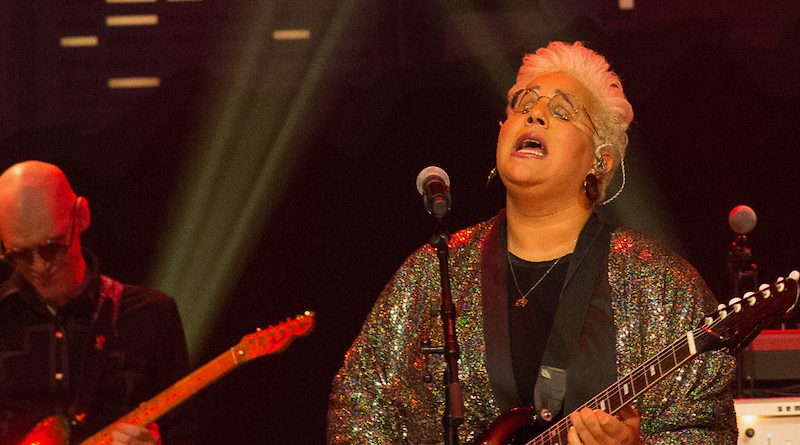 Click here for photos of Brittany Howard at Forest Hills Stadium in Queens, NY on September 11th, 2021 in the QRO Concert Photo Gallery

Click here for photos of Brittany Howard at Apollo Theater in New York, NY on April 21st, 2018 in the QRO Concert Photo Gallery

As the Festival by the same name (QRO recap) occupied Zilker Park, downtown at the Moody Theater, the PBS staple Austin City Limits recorded almost nightly TV episodes for their 47th season. While the Grammy Award-winning band Alabama Shakes has been featured on the show, Wednesday, October 6th was devoted to the intimacy of Brittany Howard in her debut on the show as a solo artist. Singing songs of celebration and heartache, the artist moved the crowd through her storytelling, guitar licks, and a few handclaps.

Shuffling out onto the stage and smiling at the crowd while her keyboardists laid out church-like gospel sounds, a bespeckled Howard was dressed in a shimmering golden robe and black spandex while sporting a new platinum high-top pompadour. Howard kicked off her set with the energetic Funkadelic jam “Hit it and Quit it” activating a band that included dueling organs and the backbone drumming of Nate Smith.

The artist’s lyrics are almost like diary confessions, a personal romance novel of revelry, love, loss, and hope that she opens up and shares with all of her power. Her linear narrative draws heavily from her 2019 album Jaime, written in honor of her sister who taught her music and poetry but had recently died from a battle with cancer. The taping followed a similar setlist to the album, starting with the sequence of “He Loves Me”, “Georgia,” and the wildly popular song “Stay High”. Indeed, she further elevated the crowd with her cover of the Jackie Wilson song “(Your Love Keeps Lifting Me) Higher and Higher”

Howard provided context to her songwriting that features a relatable vulnerability, doing so towards the end of her set as she stopped before she played “Baby”, saying, “I wrote this song when I was on the low side of an 80/20 relationship.” Despite her heartbreak, she preaches being accepting of heartbreak and arming herself by not succumbing to the temptation of desires in the future as he pointed three fingers pointed in the air representing love, peace, and prosperity as she exited the theater.