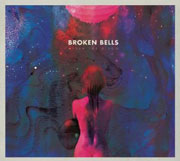 It’s no secret that James Mercer (of The Shins – QRO live review) and Brian “Danger Mouse” Burton are two musical powerhouses.  So when they teamed up and released their debut album back in 2010 they made quite an impression.  That record, Broken Bells (QRO review), had enough staying power to keep fans interested four years later, which is not often something you see with a new band.  Now, we find ourselves in 2014 and are seeing their re-teaming and the release of their second full-length, After the Disco.

The best thing you can hear going into a listening session of After the Disco is to 1) Not compare it too much to their first album and 2) Give it a second, perhaps even a third, chance.  It will grow on you.  At first, the first three tracks seem like the high point of the record and that it’s all downhill from there.  Songs two and three (“After the Disco” and “Holding On For Life”) you may have already heard as they have both been available to stream online for quite some time.  The rest of the songs are rather mellow, but you’ll come to find are just as good in their own way.

Click here for photos of Broken Bells at 2014 Governors Ball in New York, NY in the QRO Concert Photo Gallery

Click here for photos of Broken Bells at SXSW 2010 in Austin, TX in the QRO Concert Photo Gallery

After the Disco isn’t a concept album per se, but all of the songs sort of revolve around this idea of people from the past – around the 1950s – looking ahead to what they thought our world today would be like.  It’s sort of interesting to think about that idea because when you hear the songs, especially opener “Perfect World”, that idea comes through both sonically and lyrically with lines like, “Though we know it’s over / It keeps exploding / Every morning when we rise.”

There is an interesting analogical element to the whole After the Disco experience, from the songs all the way to the album cover, which, if you look closely at the top of the piece, it shows the pink ball that was featured on the cover of Broken Bells’ first album.  Below that, there is a naked woman staring off into a dark abyss.  The cover, coupled with the title After the Disco, the concept of people of the past looking to the future in which we now live, and the dark sounds of songs like “Leave It Alone”, seems to suggest a theme of “Where do we go from here?” or “What’s next?”  Perhaps Burton and Mercer are both asking that question of themselves as well as posing it to their audience.  It’s an interesting notion and adds to the overall complexity and depth of this album – a worthy follow up and a good predecessor to whatever might come next.

Your Friend – “Tame One”