Broken Social Scene on Canada Day - what could be more Canadian?... 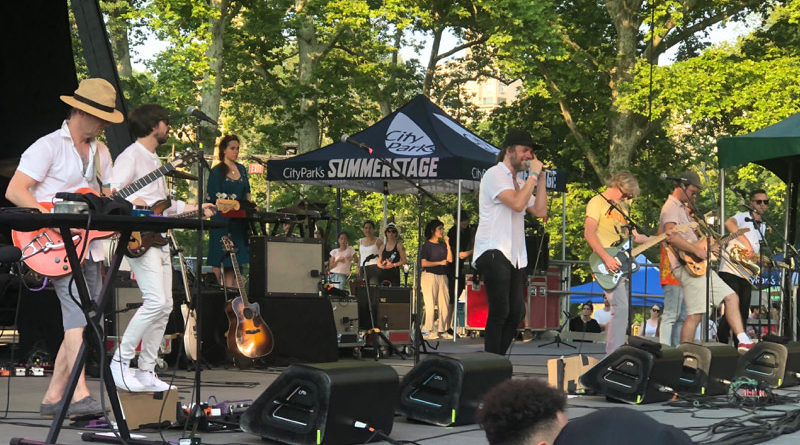 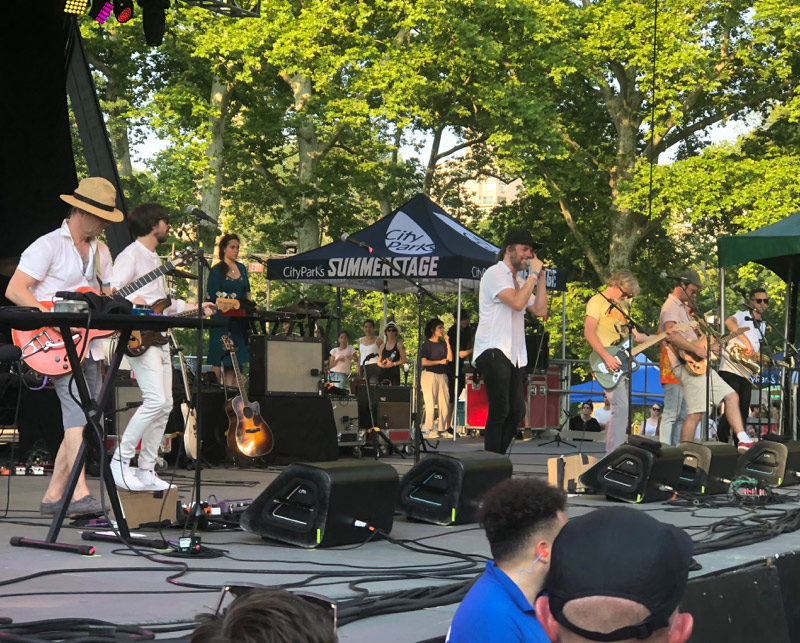 In the U. S. of A., everyone knows that our national holiday is the Fourth of July – and naming the holiday after the date means that everyone knows when it falls (and it doesn’t move around like Thanksgiving or Memorial Day). But three days before that, on July 1st, is Canada Day, our neighbor to the north’s own national holiday. It may not be as old, dating back ‘only’ 151 years, and Canadians probably don’t go as firework-mad as us Yanks, but it’s still a special day, one that the Canadian government makes sure isn’t just celebrated at home, but also in their neighbor to the south. The Canadian Consulate of New York brought Toronto’s own Broken Social Scene south-of-the-border to Central Park SummerStage (QRO venue review) for the Sunday holiday this year – what could be more Canadian?

Well, there was one thing that wasn’t Great White North: the heat. A heatwave hit much of North America starting that weekend, and while Canada’s founding fathers were wise to put their national holiday in short period where it’s warm up there, it was blisteringly hot down in New York City. What would have been a packed Sunday afternoon show had a much smaller attendance, with many sitting on the ground in what shade they could find. There was free water – and lines for the free water – in coolers labeled “GMA” because the ABC morning talk show has concert tapings there; wise were the people who brought their own water bottles to fill (doing God’s work were the SummerStage employees refilling the quickly empty coolers). There was also a mister tent to the side of the stage, which people could stand under to cool down (though it would really fog up one’s glasses…). Particularly enjoying the mister were the kids at SummerStage brought by their parents, like one with a t-shirt that said, “Sorry, I Left My Homework On Another Planet,” which beat out all the clever Canadian t-shirts (such as “Eh-Team”) for best t-shirt that day. As they day went on, it became more bearable, perhaps people just adjusted more (or got over their hangovers from Saturday night…), and the standing crowd in front of the stage grew. 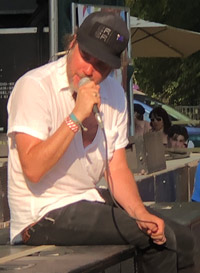 Broken Social Scene frontman Kevin Drew acknowledged the heat early on, but it didn’t hamper the band. A one-off performance, off-album cycle, invited by the Canadian Consulate (“They asked some Canadian bands, and they said no, so then they asked us…”), it could have very easily been a mellow performance by the group, soaring atmospherics but not wild energy. Thankfully, Drew & co. still had their druthers on songs from classics like You Forgot It In People opener “Pacific Theme” to the following “Protest Song” off last year’s Hug of Thunder (QRO review). BSS did also do their slower, sweeter material – most sweetly “Sweetest Kill”, in which Drew sat down at the lip of the stage and sang directly to the crowd (many ladies wishing he’d marry them and whisk them off to that magical land to the north).

This isn’t to forget the other members of the large outfit. Guitarist Andrew Whiteman (QRO interview) rocked the linen shorts suit & hat (and pretty sure he sang into an empty mike at one point). As has been on the Thunder tour, the female vocalist spot was filled by Whiteman’s AroarA co-member Ariel Engle, ably holding the spot previously held by the likes of Feist & Metric’s Emily Haines. Singer/bassist Brendan Canning (QRO interview) was his usual wild self, while multi-instrumentalist and musical mad scientist Charles Spearin (QRO interview) was his usual reserved self. But the hardest worker up there was easily drummer Justin Peroff – “We keep playing until Justin passes out,” Drew joked. 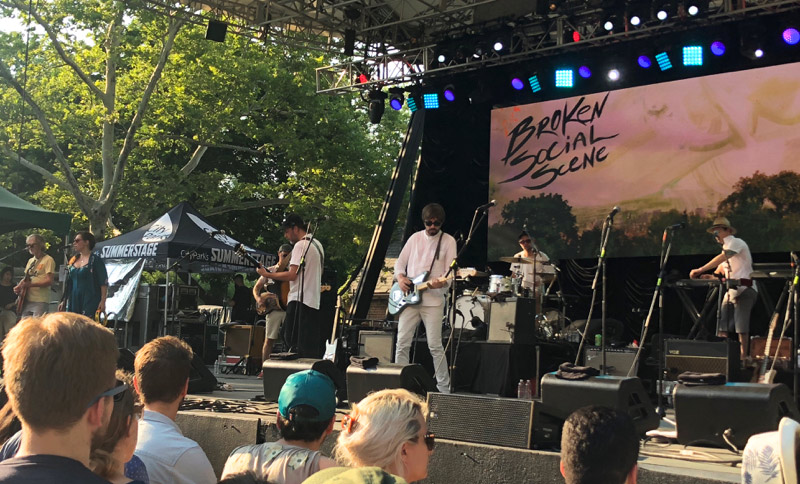 The set ended with a string of classics, “Superconnected”, “Handjobs For the Holidays”, “7/4 (Shoreline)”, “Almost Crimes”, “Ibi Dreams of Pavement (A Better Half)”, and “Lover’s Spit”. It’s always been hard for Broken Social Scene’s new material to match their beloved, breakthrough old (though they’ve done a better job in recent years than fellow ‘Canadian Invasion’ artist, Arcade Fire…), and this off-cycle free weekend afternoon show was undoubtedly full of fans who were enduring the heat for the songs from their younger days. The ‘golden oldies’ set included Drew leading the crowd in the band’s usual ‘shout out your frustrations’ group catharsis, which this day was definitely about the heat, but even more so, the state of the nation.

Multiple times, Drew remarked on how much not just he & the band loved “your country,” but how much Canada as a whole did, “Even though we’re probably going to war. You’ll win, and we’ll apologize.” The ever-so-polite Canadian said sorry for all the conflict between the two countries (fans yelled out that it wasn’t his fault, or Canada’s), but reminded everyone in the of course left-of-center audience that things will get better (Cynthia Nixon was reportedly seen earlier, trolling for votes, because a free BSS show would be full of voters for the Sex & The City progressive gubernatorial Democratic primary challenger). The current spats between the two neighbors can be overblown (this isn’t 1812, or Canadian Bacon), but it’s wonderful to be reminded that the people still love each other, despite what any political leader might say or do or tweet.

Of course, the Fourth of July did come around a few days later, we’re still in the U.S.A., Trump’s still President, and it’s still super hot out. But gotta love that Canadian hospitality. 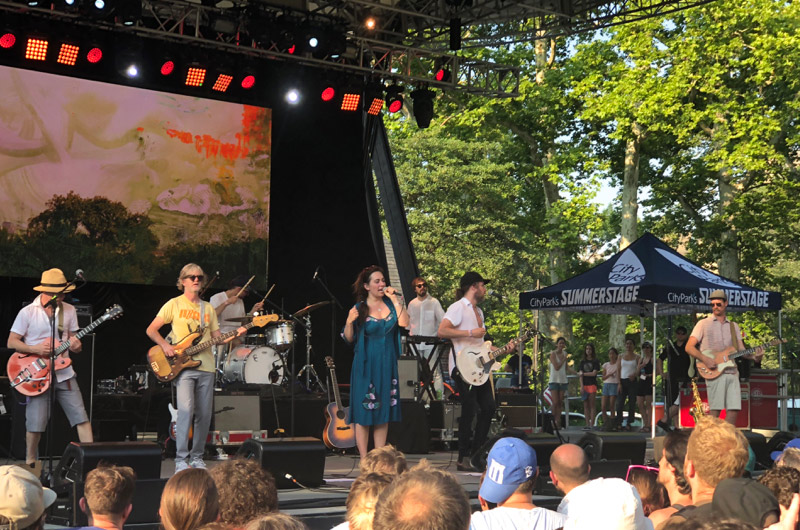