<img src="http://www.qromag.com/wp-content/uploads/2010/04/brokenbellsbrokenbells.jpg" alt=" " />The highly anticipated collaboration between Danger Mouse & The Shins' James Mercer is less than the sum of its parts. ... 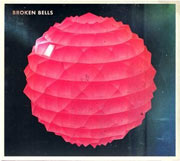 A few years ago, two of the hottest artists out there were Danger Mouse & James Mercer.  The former burst onto the scene in 2004 with The Gray Album, his combination of a cappella versions of Jay-Z’s Black Album and samples-made-into-beats from The Beatles’ White Album, earning Entertainment Weekly‘s ‘Record of the Year’ – he subsequently went on to produce for the side-projects of Blur frontman Damon Albarn, Gorillaz’s Demon Days & The Good, the Bad and the Queen’s self-titled release (QRO review), then teamed up with Cee-Lo as Gnarls Barkley, giving the world smash-hit single “Crazy”.  Meanwhile, James Mercer’s Shins (QRO live review) blew up thanks to Natalie Portman telling Zach Braff, “Listen to this; it’ll change your life” in the hit indie film Garden State in 2004; when The Shins finally followed up their soundtrack appearance with Wincing the Night Away (QRO review) in 2007, it hit #2 on the charts and the band were superstars.

And then?…  Gnarls Barkley’s The Odd Couple wasn’t as highly touted or as successful, but Danger Mouse kept in the producing game with Beck’s Modern Guilt (QRO review), as well as getting into a fight with label EMI over the release of his collaboration with Sparklehorse, Dark Night of the Soul.  Mercer let a few of The Shins go, but the promised follow-up record never followed up.  However, last year, the two teamed up as Broken Bells, announced in the fall, out with their self-titled record in the spring.  Yet this highly anticipated collaboration is less than the sum of its parts.

Broken Bells does start off promising with “The High Road”, a smoother group-groove Shins that retains that band’s best part, Mercer’s signature indie-harmony voice.  But that’s the relative high point, as the album slides into sub-Shins after that.  Without the rest of his old band, Mercer doesn’t have the pop-catch to back up his removed brightness; instead, everything feels distant and uninspiring – this is not a record that would change anyone’s life, or even one that a manic pixie dream girl would tell the sad leading man that it would.  The distance leaves pieces like the echo & clap-beats of “Trap Doors” or airy “Your Head Is On Fire” only nice, while the higher “The Ghost Inside”, “Sailing To Nowhere” and “Citizen” are ultra-forgettable.

That Broken Bells lean towards The Shins is understandable, as Danger Mouse (who plays drums in the live band – QRO photos) is more a producer/remixer than a creator of original content.  But this puts the album in serious shadow, and only points out the tightrope that The Shins were able to walk but Broken Bells can’t, that fine slash between pop and rock.  When Broken Bells goes just Shins-ier near the end on “October”, it’s clearly for the better.

That is followed by some hints of something more in the last two tracks, “Mongrel Heart” and “The Mall & Misery”.  The former has more push, a bit more haunting, a bit more interesting, and the latter uses a sharp echo-jangle to the guitar, indietronic beat, and more noticeable charm.  But it’s too little, too late.  Not a ‘bad’ record by any means, but well below expectations, and certainly no replacement Shin.