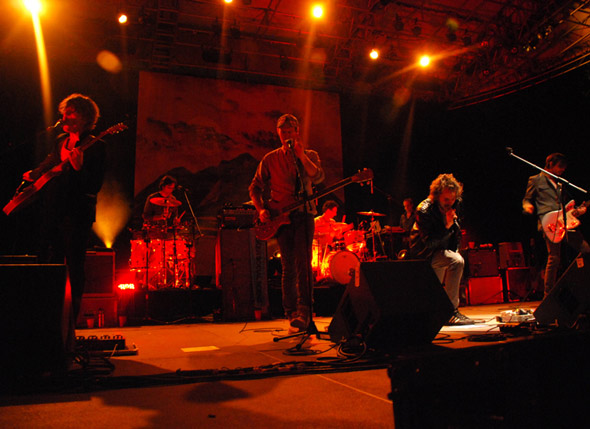 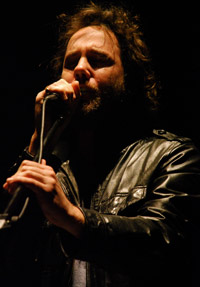 When a band is called ‘epic’, it brings to mind either massive stage spectacle (think KISS), or anthemistic emotional grandeur that captures your heart.  Yet Canadian alt-all-stars Broken Social Scene are able to be ‘epic’ without being either of those things: there’s no massive pyrotechnics, but they are having fun up there – and their live show is still ‘epic’ in an amazing way, like their performance at New York’s Central Park SummerStage on Saturday, September 18th. 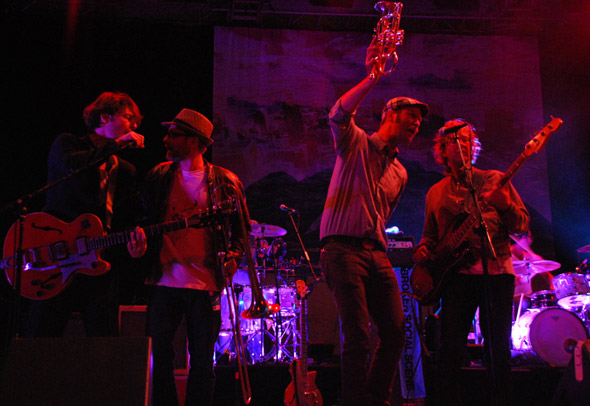 Two of the most obvious ways the Toronto collective is epic is in size of the band, and length of their sets.  Frontman Kevin Drew and sideman 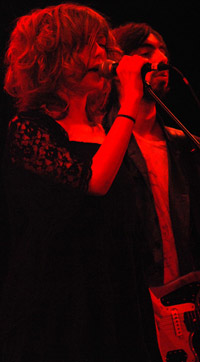 Brendan Canning (QRO interview) have long had a murderer’s row of a line-up around them in Broken Social Scene.  There’s guitarist Andrew Whiteman (QRO interview), a.k.a. The Apostle of Hustle (QRO spotlight on), who looks like a young Tom Waits, moves like a rockin’ mime, and plays like no one else.  There’s multi-instrumentalist Charles Spearin (QRO interview), who mans just about everything but singing (he’s also in seminal post-rock/vocal-less outfit Do Make Say Think), and is the mad scientist/mustache wearer of the group.  More recent recruits include drummer Justin Peroff and guitarist Sam Goldberg, along with producer/drummer John McEntire (of Tortoise and opener The Sea & Cake – QRO photos).  There’s the rotating female vocalist slot, previously filled by such luminaries as Emily Haines (of Metric – QRO live review), Feist (QRO live review), and Amy Millan (of Stars – QRO live review), and currently held by the beautifully bouffant Lisa Lobsinger.  And there’s also the supporting cast of horn players, percussionists & more, all arrayed around the wacky Canning and the ‘master of ceremonies’ Drew, who takes the time to introduce every single member of the band at various points in the show. 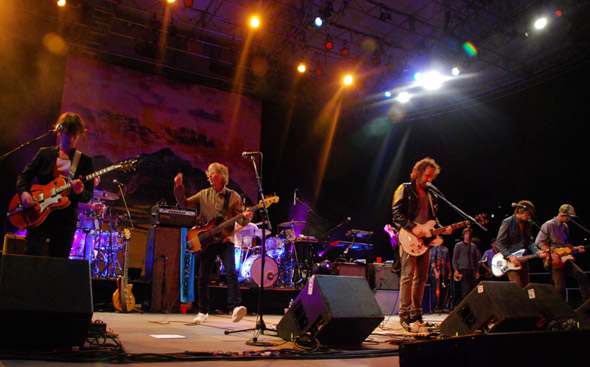 Click here for photos of Broken Social Scene at Music Hall of Williamsburg in Brooklyn, NY on May 8th, 2010 in the QRO Concert Photo Gallery 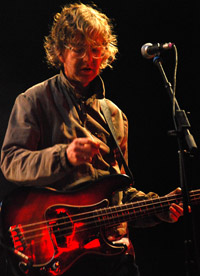 Drew has the time to introduce everyone because Broken Social Scene play long sets, like their almost two-and-a-half hours at SummerStage.  Like most outdoor venues in NYC (QRO NYC Venue Guide), SummerStage has a 10pm curfew, "And we’re playing right up to it," declared Drew at the start of the show.  Drew also didn’t cotton to any encore break, saying that they wanted to play more songs instead (though the lack of a break caught some other members by surprise, who were walking off & called back on when Drew demanded "Looks Just Like the Sun"), making for a 24 song set. 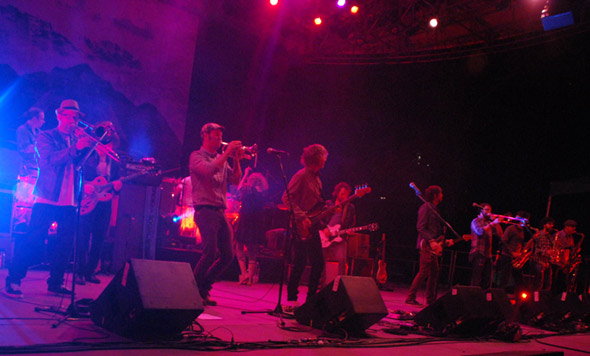 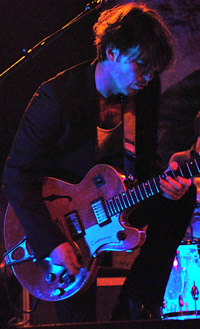 Most bands that play that long have a massive, multiple-decade discography, and mix in the rarities in a ‘greatest hits’ set list.  While Drew, Canning & the rest have been performing various acts since the nineties (indeed, there’s going to be a re-release of Anthem For the Could’ve Bin Pills by Drew & Spearin’s pre-BSS outfit, K.C. Accidental – QRO Upcoming Releases), BSS only started in 2001 with Feel Good Lost, breaking through as part of the ‘Canadian Invasion’ the following year with one of the decade’s best albums, You Forgot It In People.  What’s more, Feel Good and 2004’s Beehives were largely instrumental, making it hard to fit pieces from either in a set list (at SummerStage, there were none from Beehives, and only one, "Guilty Cubicles", from Lost).  And ever since the band began touring this year’s Forgiveness Rock Record (QRO review), they’ve eschewed playing any from the previous two ‘Broken Social Scene Presents’ records, Kevin Drew’s Spirit If… (QRO review) & Brendan Canning’s Something For All of Us… (QRO review). 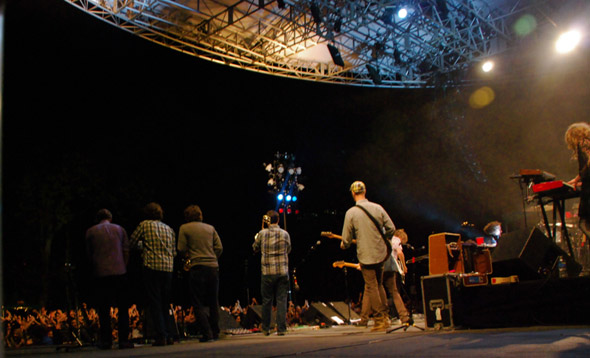 So how can they fill two-plus hours with twenty-four songs from basically just three records (People, Forgiveness, and 2005’s Broken Social Scene)? 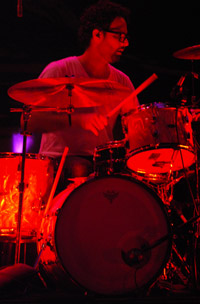 Well, it helps that those three records are chock full with great tracks.  From opening with People‘s "K.C. Accidental" to closing with Scene‘s "Ibi Dreams of Pavement", the SummerStage set list was littered with excellent pieces.  Forgiveness naturally dominated at just under half, with People & Scene splitting the rest (save "Cubicles"), but the new album’s songs impressively fit right in with the two older records, such as second song "Texico Bitches", Canning-sung "Water In Hell", or Forgiveness‘s amazing opener, "World Sick".  Meanwhile, there was still time for the already-classics like "7/4 Shoreline" (the piece that introduced Feist to the world, pre-iPod commercial, but was equally ably handled by Lobsinger at SummerStage), Whiteman-sung "Fire Eye’d Boy", People greats "Stars and Sons" & "Cause = Time" back-to-back, and even an extended "Lover’s Spit".  In fact, Broken Social Scene was even able to squeeze in a piece they hadn’t done in years, Scene‘s "Hotel".

In such a massive show, built on only three records, there were some weaker points.  Well, not really ‘weaker’ so much as slower and less – you guessed it – ‘epic’. 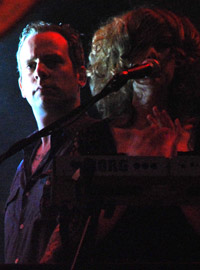 BSS have leavened their records with slower, more-beautiful-than-rockin’ songs, such as the Lobsinger-sung "All to All" (whose lyrics gave Rock Record it’s first name).  Undoubtedly lovely on Forgiveness, in the live set it unfortunately costs a lot of the momentum that the band had been building up.  Of course, in such a long set, maybe the band needed a cooling down.  The older "Looks Just Like the Sun" was better placed in the set list, as the ‘return from the encore break that never happened’ piece, catching everyone’s breath before the ‘big finish’.  "Hotel" isn’t the band’s strongest, and the sub-par-for-BSS "Romance To the Grave" followed it, then the instrumental "Cubicles", leaving a bit of a fallow period in the middle of the set. 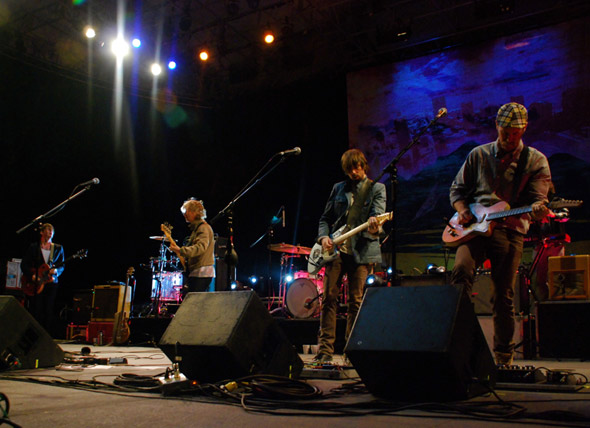 But those are minor critiques of one of the most impressive live bands out there today.  Some fans might also have been hoping for guest stars – their 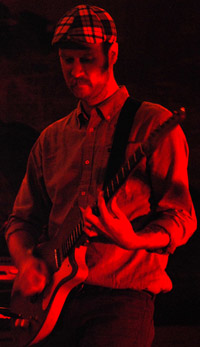 last visit to New York saw not only Emily Haines guest-appear, but also Metric’s Sebastian Shaw (and for their own Toronto Island Music Festival earlier this summer – QRO recap – the band not only had both of those two, but also Feist, Sebastian Grainger – QRO album review – and even Spiral Stairs of Pavement – QRO album review – who were playing the next night in Brooklyn – QRO concert listing – and next week for four nights there at SummerStage – QRO NYC Show Preview).  And those NYC shows were at indoor club venues, Webster Hall (QRO venue review) and Music Hall of Williamsburg (QRO venue review), where you were a lot closer up to the band (QRO photos) – the SummerStage show couldn’t quite match on either of those two accounts.  But Broken Social Scene can do everything from headline festivals (such as Chicago’s Pitchfork Music Festival – QRO recap) to play indoor club venues (like New York’s small Mercury Lounge – QRO venue review – two years ago – QRO live review), and could certainly fill Central Park SummerStage (QRO venue review) – something else that lent to the night’s uniquely ‘epic’ feel. 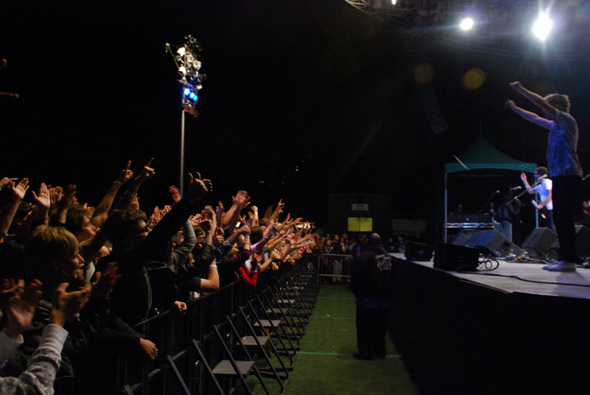 Yet Broken Social Scene don’t take themselves too seriously, a major fault with most ‘epic’ acts.  At one point, Drew joked about lighting a cigarette, in protest at the proposed new law in New York to ban smoking in parks & the general outdoors, "That doesn’t really work for Mean Streets; that doesn’t really work for your history.  Where’s Scorsese on this one?  Can he be the spokesperson?  It’s a choice…"  Canning mock-added, "It’s a choice a choice to die…", and Drew did tell the crowd cheering him lighting a cigarette, "It’s a terrible thing to cheer,

folks…"   Drew also joked about the massive number of horns, it being a little early in the day for that many horns (though there was no reference to the last time BSS played SummerStage, back in 2005, opening for Dinosaur Jr. – QRO live review at SummerStage last year – when then-producer David Newfeld tried to buy weed in Washington Square Park and was beaten up by the cops!  The band joked about the incident at that show – mostly, actually, joking about the stupidity of going to Washington Square Park to buy weed – but not at this show; perhaps Newfeld’s later suit & settlement with the NYPD put gag order on referencing it anymore…), but the best moment with the audience was easily when Drew sent Canning, Spearin, Whiteman & more into the audience – or rather on top of the audience, to crowd-surf, "I’m gonna send some people in there – will you take care of them?"   What other ‘epic’ act crowd-surfs at their own show – and not the main man, but the rest of the band?