<img src="http://www.qromag.com/wp-content/uploads/2010/05/brokensocialsceneforgive.jpg" alt=" " />Broken Social Scene brought their indie-collective sound to the wider world, and they're still doing it best. ... 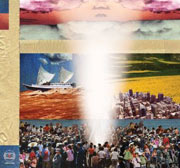 Broken Social Scene brought their indie-collective sound to the wider world, and they’re still doing it best.  Forgiveness Rock Record somehow manages to be what you’ve loved about BSS for years now, but without feeling like a retread or a shadow.  Weightier than their most recent releases, but more compact than the ones before that, Forgiveness needs none.

Five-plus years ago, the ‘Canadian Invasion’ swept into indie-rock, led by the bilingual heads of Toronto’s Broken Social Scene (QRO spotlight on) and Montreal’s Arcade Fire (QRO live review), ushering not just Canadian music, but the collective style southward (perhaps the Canadian west was led by The New Pornographers – QRO live review).  Yet ever since, like with Arcade Fire’s Funeral, BSS have always had the shadow of breakthrough You Forgot It In People to contend with.  Arcade Fire followed up with the shadowed Neon Bible (QRO review), and then disappeared; but after BSS’s own 2005 self-titled follow-up, the band went a more disparate direction, as various members spun off or joined on.  Frontman Kevin Drew released Broken Social Scene Presents: Kevin Drew’s Spirit If… (QRO review) in 2007, which one couldn’t quite place as either a solo record of just BSS with some added words to the title.  Almost as if to prove that ‘Broken Social Scene Presents: Kevin Drew’ wasn’t a redundant name, the following year saw Broken Social Scene Presents: Brendan Canning’s Something For All of Us… (QRO review), focused on singer/bassist Brendan Canning (QRO interview), but only so much.  Meanwhile, guitarist Jason Collett (QRO interview) returned to his solo career, guitarist Andrew Whiteman (QRO interview) spent some time on his own project, Apostle of Hustle (QRO spotlight on), multi-instrumentalist Charles Spearin (QRO interview) worked both in the post-rock Do Make Say Think and his own unique solo experiment, last year’s The Happiness Project (QRO review).  But the only ones to really shine brighter than You Forgot were guest female vocalists like Leslie Feist (QRO live review), Emily Haines (of Metric – QRO live review) and Amy Millan (of Stars – QRO live review).  Where exactly was Broken Social Scene headed?

But who says they need to go somewhere new?  BSS helped introduce the collective, which has since become as ubiquitous in indie music as Canada, and still do it best.  After the twin Presents records, the band has returned to ‘just’ Broken Social Scene, and have shed a number of the extra/part-time members for a collective ‘core’ in Drew, Canning, Whiteman, Spearin, drummer Justin Peroff and guitarist/bassist Sam Goldberg (still retain the rotating female vocalist spot, on tour currently filled by Lisa Lobsinger).  They even left longtime producer Dave Newfeld to work with John McEntire (of Tortoise, The Sea & Cake).  Forgiveness Rock Record is undeniably a Broken Social Scene endeavor, yet they’re undeniably the best at it.

Opener/single “World Sick” mixes restrained, atmospheric and groovy portions with builds/booms into something bigger, yet evokes in both small and large.  The bigger pieces are naturally the more memorable ones, whether the more ‘traditional’ BSS collective such as “Forced To Love” (you can easily visualize Whiteman doing his back-up vocals, with his signature hand movements), the pressing & ominous road “Chase Scene”, or Canning-sung epic relax “Water In Hell”.  But the collective heart & complex pop of “Texico Bitches” fits in perfectly with the somewhat softer songs of BSS, and there a number of restrained washes, like the sad loss of “Sweetest Kill”, airy “All To All”, and females-led “Sentimental X’s” – where Feist, Haines & Millan sing together for the first time ever (any connection between the title & the ladies’ possible romantic pasts – or futures – with the BSS fellas is left up to more prying eyes).

Some of those washes wash together, like “Romance To the Grave”, instrumental “Meet Me In the Basement” and too-slow closer “Me & My Hand”.  And the upbeat with a touch of lo-fi “Art House Director” and “Ungrateful Little Father” could stand a bit more complexity, especially when laid against BSS’s ability to be intricate, yet catchy.  And nothing on Forgiveness can quite match the anthemistic excellence of early songs such as “Almost Crimes” and “7/4 (Shoreline)”.