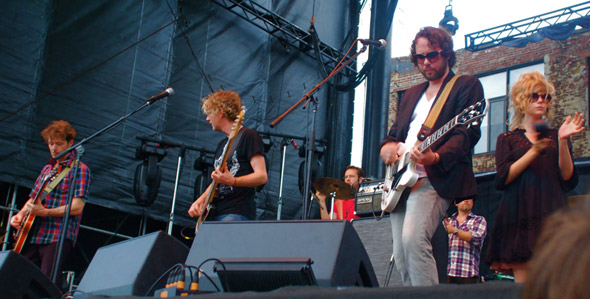 There’s a certain level at which a band that isn’t from New York plays the Big Apple a lot.  Not the lowly ‘barely tour out of the northeast’ or ‘have only played a few cities,’ but also not the massive ‘infrequent tours that only play the big cities.’  It’s when a band is successful enough to play multiple tours a year – not to mention good enough live and physically/mentally able enough to sustain that kind of touring – but also isn’t so successful that NYC hasn’t gotten on its hipster-hate.  And they’re from North America, usually (but not always) the northeast.  Toronto’s Broken Social Scene are successful enough to book multiple tours that go through New York, and are so great live that even Brooklyn’s hippest borough isn’t sick of them.  So they rode into town one more time, at Williamsburg Waterfront (QRO venue review) on Thursday, September 8th. 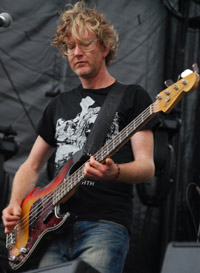 This was a different show than other BSS performances, because they were opening for Brooklyn’s own returning heroes, TV On the Radio (QRO live review in Brooklyn).  Broken Social Scene opening for anybody is a little weird, even TVOTR – kind of like Dinosaur Jr. (QRO live review) opening for Sonic Youth (QRO live review).  Indeed, possibly the last time BSS opened in New York it was for the then-just-revived Dinosaur Jr. at Central Park SummerStage (QRO venue review) in 2005 – when BSS’ then-producer Dave Newfeld was assaulted by the NYPD when trying to buy weed in Washington Square Park (he later won a handsome settlement).  Since then, the Scene have gone on to headline such large NYC haunts as SummerStage (QRO live review) and Terminal 5 (QRO venue review) earlier this year (QRO live review).  Indeed, "We’ve played here five times in the last year – we haven’t played our hometown that much…" (QRO photos of BSS at home in Toronto).  Frontman Kevin Drew proclaimed that this would be the band’s "last New York show for a very long time," making the Waterfront performance something of a swan song to this round of the group’s Big Apple-heavy touring. 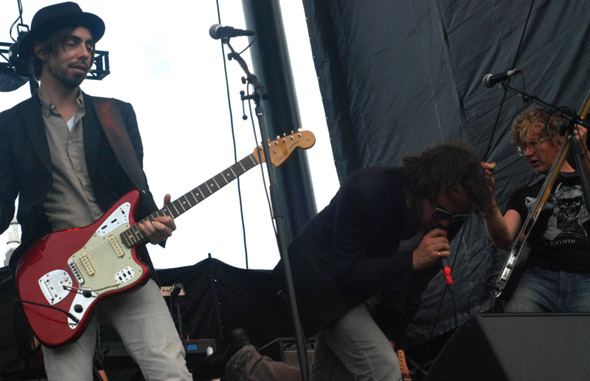 While Broken Social Scene did get longer to play than your usual opening band, their set list was trimmed down from their admittedly very large usual number of songs (this is a band that can play full nights with no opener).  Also, playing at an outdoor venue meant an early close, and thus early open and start to the show, with BSS kicking off at 6:30 PM to a not-full Waterfront (Thursday the week after Labor Day has few early departures from work).  That did mean that the band played in the daylight, such as it was on the very overcast day that thankfully never saw rain – Drew even pointed to break in the clouds over Manhattan, lit up by the setting sun, claiming, "We bought that on the band credit card" and "We’ve got sun, we’ve got health care, we’ve got everything."  Oh those Canadians… 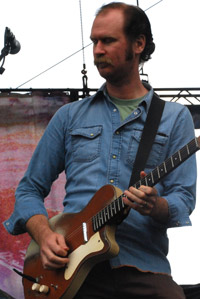 While the show stuck to some of what the band has been doing on their latest tours, including no songs from the two ‘Broken Social Scene Presents’ records, Drew’s Spirit If… (QRO review) & singer/guitarist Brendan Canning’s Something For All of Us… (QRO review), and this recent go-round’s covering of Modest Mouse’s (QRO album review) "The World At Large" (which was a great rendition, but there’s a bunch of their own songs that people would have rather heard), the band actually didn’t favor their most recent release, last year’s Forgiveness Rock Record 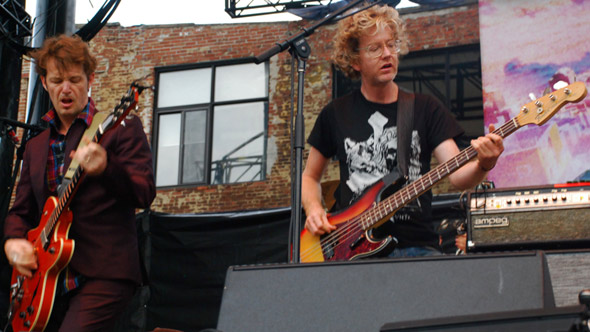 (QRO review).  Usually when a band tours, the tour is always about the new album (unless it’s a ‘play an old album in its entirety,’ and usually then said album just got a deluxe edition re-release…).  Perhaps since BSS had played New York so much since Forgiveness came out, the band thought they’d offer up more of the older ‘classics’ from 2005’s Broken Social Scene and especially 2003’s breakthrough You Forgot It In People. 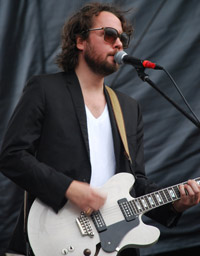 Broken Social Scene certainly didn’t forget You Forget, with almost half of the set comprised of People tracks, starting with timeless opener "Cause = Time", as well as "Late Nineties Bedroom Rock For the Missionaries", "Shampoo Suicide", and singles "Stars and Sons" and "K.C. Accidental".  Admittedly, "Late Nineties" was a little subdued, but it slid nicely into the building bigger "Shampoo".  Broken Social Scene got singles "7/4 (Shoreline)" and "Fire Eye’d Boy", as well as closer "Ibi Dreams of Pavement (A Better Day)", and the evening wasn’t completely Forgiveness-less, thanks to "Texico Bitches" and "Meet Me In the Basement".  Drew even passed the mike to guitarist Andrew Whiteman (QRO interview) – a.k.a. the Apostle of Hustle (QRO spotlight on) – for "Fire Eye’d", and the band’s current guest female vocalist Lisa Lobsinger acquitted herself very well on "Shoreline" (the duet that originally introduced the world to Feist – QRO live review) and others.  Since Forgiveness came out, Drew has seemingly strived to give others a chance in the spotlight, and Lobsinger in particular has grown in the role that’s been held by the likes of Feist, Emily Haines (QRO solo album review) of Metric (QRO live review), Amy Millan of Stars (QRO live review), and Elizabeth Powell (QRO interview) of Land of Talk (QRO spotlight on) – though that night there was no Canning (QRO interview)-sung new "Water In Hell", and multi-instrumentalist Charles Spearin (QRO interview) never sings; but what about giving newer guitarist Sam Goldberg a shot?… 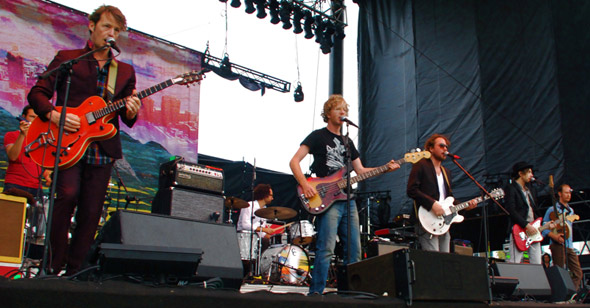 Like any band, Broken Social Scene has its ebbs and flows in activity, but perhaps more than most bands, because there are so many members – the high stage at Williamsburg Waterfront also included 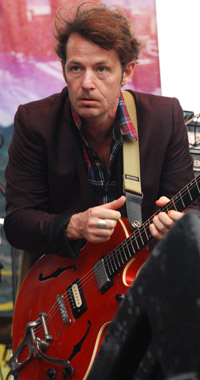 drummer Justin Peroff, guest-spotting St. Vincent (QRO spotlight on) violinist Daniel Hart (a.k.a. The Physics of Meaning – QRO album review), and four or five horn players (one of whom was Metric’s Josh Winstead).  It’s hard to wrangle everybody together for anything, so when it happens, the band goes full-bore.  This upcoming absence from New York, and probably the road in general, will give the members time on their own, as well as the group time to work on the next Record.  New York will be waiting, and welcome the Scene back with open arms.