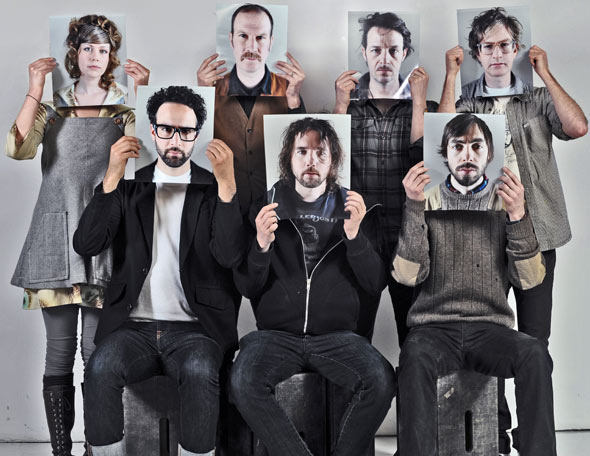 While everyone justifiably complains about the high cost of living in New York (though the Wall Street meltdown did temper rent rises recently), there are numerous benefits, including ones rarely mentioned.  For instance, there’s the New York City subway system – not that cleanly and you can’t get cell reception down there, but it goes everywhere and runs 24/7, so between that and the ubiquitous taxis, you can get almost anywhere at any time without having to drive (thus, when drunk).  There’s that seemingly no natural disasters ever hit the Big Apple – while half the world seems to be flooding, the worst that ever happens to NYC is too much snow over the holidays.  And any musical act playing outside of their hometown has to play New York, whether Madison Square Garden (QRO venue review) or Living Room (QRO venue review) – and every now and then you get to show it off to everyone else, like when alt-all-stars Broken Social Scene played Terminal 5 (QRO venue review) on Tuesday, January 18th, and it was streamed live to the rest of the world.

Click here for photos of Broken Social Scene at Music Hall of Williamsburg in Brooklyn, NY on May 8th, 2010 in the QRO Concert Photo Gallery

It had only been a few months since the Toronto collective last played New York, headlining Central Park SummerStage (QRO venue review) last September (QRO review).  And they’d played the smaller Webster Hall (QRO venue review) & Music Hall of Williamsburg (QRO venue review) last May (QRO photos).  But it isn’t just the draw of NYC that kept the band coming back, as they’ve established themselves as one of the most sought-after touring indie bands, including becoming a festival favorite across the country (and beyond).  Still, this was an extra-special show because it was being streamed live on YouTube by NYC concert promoter Bowery Presents, who manage Terminal 5 and a number of other New York venues (including said Music Hall of Williamsburg, and throw lots of shows at Webster).  Indeed, the whole event was being sponsored by Lexus (who probably have a dealership near Terminal 5, which is located in far west Midtown – one of the few places in Manhattan where rents are low enough to allow for large establishments, like a three-story converted warehouse concert venue, or an auto dealership, but also nice enough that people would actually go there for said businesses); the car company actually had a fairly light presence at the show, since most of their ads were embedded in the stream.

In fact, the filming of the show had a pretty light presence over all, save for the one camera on a giant swinging arm swooping above the heads of the stage floor crowd, sometimes coming so close you so wanted to touch it (and probably get thrown out by security).  It even provided a bonus, as the stream was also played live on Terminal 5’s own video screens, which usually just show a static center-stage camera shot for those in the balconies who can’t see over people’s heads or are getting a drink (a similar set-up took place during the streamed SPIN25 shows there last summer – QRO review).  The cameras also took up some extra space on the stage floor, giving the show an even-more-packed feel (security had to keep steps clear), but BSS fans aren’t the rowdy sort (the band is Canadian, after all…).

[editor’s note: the camera crews also took up the photo pit, resulting in no QRO photographer, not even a photo pass, so no photos of our own from the show save what could be done on an iPhone]

Still touring off of last year’s Forgiveness Rock Record (QRO review), that album naturally got the lion’s share of the set list, starting with album/show opener "World Sick", followed by the first song on Forgiveness that you loved, "Texico Bitches".  Live, the Forgiveness songs had more energy than on the somewhat more laid-back in its expanse record.  But BSS didn’t skip on ‘the hits’ from older records Broken Social Scene and breakthrough You Forgot It In the People, starting with BSS‘s "7/4 Shoreline", a.k.a. the song that introduced the world to Feist (QRO live review), before the iPod commercial.  The female vocal duties for "Shoreline" and other songs were taken up by Lisa Lobsinger, who’s been the guest female vocalist for the entire Forgiveness tour, taking up the role previously held by Feist and others such as Emily Haines of Metric (QRO live review at Terminal 5), Amy Millan of Stars (QRO live review at Terminal 5), and Elizabeth Powell (QRO interview) of Land of Talk (QRO spotlight on).

Broken Social Scene are known for getting previous collaborators like those ladies & more (such as the rest of Metric) to make live guest appearances (such as at those shows in May), so much so that it’s almost expected, or at least hoped for when you go into one of their shows.  Frontman Kevin Drew even told the audience at one point,

That it was a show being streamed live around the world probably heightened expectations/hopes to the point where Drew felt it necessary to bring it up without anyone having asked.  Besides/more importantly, Lobsinger was more than capable to handle songs old and new, like "Shoreline" & Forgiveness‘s "All To All" – and there was at least one surprise lady guest in Ariel Engle, the wife of BSS guitarist Andrew Whiteman (QRO interview), making her Mrs. Apostle of Hustle (QRO spotlight on).  Drew even said, "You have to let your wife shine.  The only reason we’re playing this song is because of Ariel," before launching into an amazing rendition of You Forgot‘s always-amazing "Almost Crimes".

Moreover, when you’ve got a band with Drew, Whiteman, bassist Brendan Canning (QRO interview), multi-instrumentalist Charles Spearin (QRO interview), plus drummer Justin Peroff and ‘new guy’ (relatively speaking) guitarist Sam Goldberg, that’s always more than enough.  When Broken Social Scene broke out in the ‘Canadian Invasion’ of 2004, they practically (re-)introduced the ‘collective’ notion to indie-rock, as the band has long been composed of all-stars from the Toronto music scene (members at other times included drummer Bill Priddle – QRO album review – and singer/guitarist Jason Collett – QRO spotlight on).  Indeed, a few years ago the band ‘stripped down’ on two ‘Broken Social Scene Presents’ records, first Kevin Drew’s Spirit If… (QRO review), then Canning’s Something For All of Us… (QRO review), which gave Whiteman time to put out two Apostle of Hustle records, National Anthem of Nowhere (QRO review) and Eats Darkness (QRO review), and Spearin to do his fascinating mad-musical scientist experiment, The Happiness Project (QRO review).  The Canning & Drew records were still very much in the BSS vein, yet oddly the ‘full band’ hasn’t been playing any of the songs from either record since they’ve been touring Forgiveness.

Whatever the reason, that only gave more time for nearly all of the new record, plus all the best of Broken Social Scene and You Forgot It In People – and more.  In honor of the Tea Party, the band brought back a piece they hadn’t played in "your country" for a while, "Canada vs. America" from the old To Be You and Me EP, and also did instrumental "Guilty Cubicles" from the band’s first album, the instrumental Feel Good Lost.  That piece was presaged by Drew introducing the never-sings Spearin (also of instrumental post-rock outfit Do Make Say Think – Drew made sure to mention DMST and Happiness in his introduction), and would generally introduce a band member before they would take up lead vocal duties (though there were no lead vocals, obviously, on "Cubicles" – but no lead vocals kind of is Spearin ‘singing’).  Lobsinger was introduced before she sang "All To All", while she, Engle and Jenn Turner of opener Here We Go Magic (QRO album review) were introduced before they took up People‘s "Anthems For a Seventeen Year-Old Girl".  Mr. Whiteman was introduced before he sang People‘s "Fire Eye’d Boy" (and again before the new song that he sings, "Art House Director"), but not Canning before his own new song, "Water In Hell" (this was one of the first, if not the actual first time that Canning’s lyrics in "Water" of "It’s the year 2010!" were no longer applicable – which only made the crowd cheer more).  Canning was instead "given the mike" by Drew at an earlier point, but Canning used it to ask the crowd whether it was okay for him to keep the hotel umbrella he had, because he’d done two good deeds already (shielding a child, with said umbrella, from a puddle being splashed on him, and giving a woman coming out of a taxi her arm to avoid the wet ground on the rainy night), so the karma balanced out.  The crowd said to keep it.

Drew needed no introduction of his own, but got extra-close to the fans by crowd-surfing during "K.C. Accidental", very nearly getting smacked by the camera-arm: 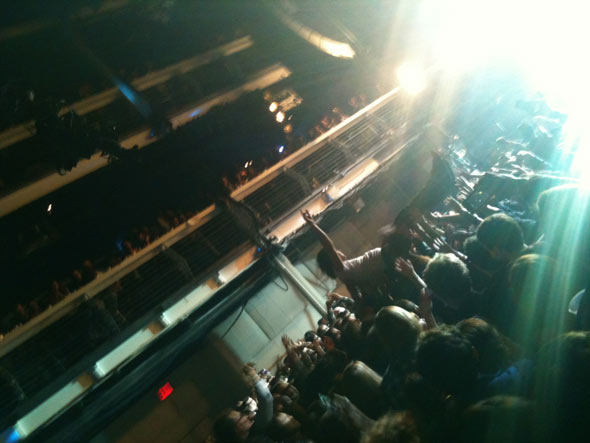 This was a semi-reprise of the September SummerStage show, when Drew didn’t crowd-surf, but got his bandmates to…

Kevin Drew is known for his sometimes-rambling between-song monologues, telling the crowd to scream it out (which they did) or to "love the one you’re with," but that was toned down a bit at this show, to get more songs in for the live stream.  Indeed, Drew repeatedly joked that they were running under, time-wise, despite their penchant for epic, soaring moments, not to mention guest instrumental interludes like the eighties saxophone from David French during "Superconnected".  But Terminal 5 is a venue with a tight time limit, and the live video stream even more so, thus he & the band had to say goodbye at the stroke of eleven.  Well, say goodbye to the live stream, as after it stopped filming, Broken Social Scene came back to cover Smokey Robinson’s "Ooo Baby Baby" with openers Here We Go Magic, and then actually finish with People‘s "Stars and Sons".  But if you were watching the live stream, or had left when Drew first said goodbye (thinking that Terminal 5’s strictness with time was sure to make eleven the end of the evening, and getting a jump-start on the mass post-show evacuation crowd who would be trying to make it through only two doors), you were out of luck – that was just for the locals who’d paid & stayed.

Everything in New York City might be more expensive, but you also have access to absolutely everything, from multiple drunken late-night transportation options to out-of-town, even out-of-country bands playing your ‘burg frequently.  Plus occasionally you get to show it off to the rest of the world, and there wasn’t a better chance to do so then when Broken Social Scene played the Big Apple again and streamed the whole show live for all of those who live in ‘the suburbs’.

And now that you’ve read about it, watch the show here: