<img src="http://www.qromag.com/wp-content/uploads/2008/07/brokensocialscenejuly17.jpg" alt=" " />It was a crazy, great, and crazy great night as the massive Broken Social Scene celebrated their own Brendan Canning in some tight quarters. ...

Broken Social Scene were playing Mercury in anticipation of two big upcoming events: their headlining slot two days later at The Village Voice’s Siren Music Festival on Coney Island (QRO Siren preview), and the release of ‘Broken Social Scene Presents: Brendan Canning’s Something For All Of Us…’ three days after that (QRO upcoming release schedule).  A copy of the new record was included in the ticket purchase, and the band was practicing the songs they’d play from it at Siren.  Yet the night became about more – much more.

It was a tight fit to begin with.  The inclusion of the record in the ticket brought about a high price ($30, for the usually $10-$12 Mercury), yet the evening easily sold out.  Some of that was due to the large ticket-buy from label Arts & Crafts, but that’s nothing new for this ‘industry showcase’ venue.  The seven-member band had also brought along newest Scenester Leon Kingstone and the three-member ‘Philadelphia’s Finest’ horn section.  When they weren’t playing, the horn men had to squeeze into the corner of the stage & floor where the band steps up onto the stage, next to the sound equipment (on the stage) or behind the extra guitars (which were filed upright on the stage floor).  Drummer Justin Peroff almost couldn’t make it through the audience to get on stage – Drew had to get the crowd to yell out his name, with which Peroff yelled back that he was coming, right from amidst the very same crowd.

The night opened with Something, though BSS curiously skipped the record’s opener/eponymous piece, starting instead with the second and third tracks “Chameleon” and “Hit the Wall”.  The slow and orchestral “Chameleon” softly waded the audience in, in a style reminiscent of the band’s early, instrumental days, but brought things to a crescendo as it grew bigger & bigger.  Single “Wall” really took its place among the panoply of great BSS singles live, thanks to its pressing, yet still fuzzy nature, with the band giving it extra energy in concert. 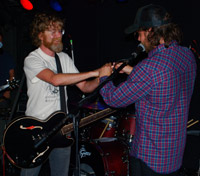 Yet it was between “Wall” and Something’s “Churches Under the Stairs” that the first of the night’s bonuses came.  Shifting from bandleader to chief cheerleader, Drew celebrated the release of Canning’s new record by giving his bandmate a ring (see right) – “And the only way this would work would be if I had my own ring!”  The bejeweled Canning & Drew then did a terrorist fist jab with their rings like The Wonder Twins (see below right), activating the catchy power & beats of “Churches”.

However, the night was anything but just Something.  Broken Social Scene went back to their last album, 2005’s self-titled

effort, with single “Fire Eyed Boy”.  The crowd greeted “Boy” particularly gleefully; its inclusion in the set list meant that the band wouldn’t just be sticking to new or ‘Broken Social Scene Presents’ material, but reach deeper.  And reach back the band did, following up “Boy” with one You Forgot It In People’s own great singles, “Cause = Time”.

As the band returned more to the present with Something tracks like the crashing “Possible Grenade” and tropicalia “Love Is New”, along with Spirit’s single, “Fucked Up Kid”, Drew & Canning more and more joked around.  After asking Mercury ‘how they’re doing?’, Drew jokingly added, “I personally said no to this show”, then mock-recounted his debate with Canning over doing it, with Drew pointing out that the first time they played the Big Apple, it was in Brooklyn (at Northsix, now Music Hall in Williamsburg – QRO venue review), before saying that Canning had retorted that he had to sell his new album.  The two men both messed around with a super-echo effect on their mikes at one point (along with discussing the merits of Will Smith, DJ Jazzy Jeff, and their “Summertime”).  After “Grenade”, Canning dedicated that piece to “All of those who can handle G Minor”, and when someone in the crowd shouted for “Marketfresh” (from 2003’s Beehives), Canning replied, “I don’t even remember that one.  A lot of things go on on a day-to-day basis in a band’s life, and rehearsing is one of them – but not all the time.”  Drew then interjected, simply and even poetically, “I call bullshit on that…”

From “Love Is New”, Broken Social Scene then waded into the very new, with “Olive”, an instrumental dedicated to the crew of film Half Nelson, and the sad, outdoor, country atmosphere of “Meet Me In The…”, announcing it was the first time they’d done it live (except in Mexico, which they added, ‘didn’t count…’).  Then Drew asked if the crowd would stick around as the band ‘did their thing’, verbally forcing them to quiet down for bandmate Charles Spearin’s ‘Happiness Project’ (“This isn’t Jersey, this isn’t your neighbor’s bar mitzvah” – Spearin, “For the record, we have no problem with Jersey of bar mitzvahs at all” – “Well, I do…”).  ‘The Happiness Project’ is the ever-experimental Spearin’s (Do Make Say Think) exploration into the melody of human speech.  He recorded his neighbor, Mrs. Morris, talking about happiness, and played it.  And then he played it again, but this time with Kingstone doing a saxophone accompaniment.

‘Happiness’ wasn’t just a surprise to the audience – Spearin himself seemed to be stunned that he got to do it live, even fumbling his words in his introduction/explanation to it.  And Broken Social Scene continued to surprise themselves.  They inserted another great People piece, “Stars & Sons”, that wasn’t on the set list (QRO photo).  Then they hit up another member’s great side/solo project, guitarist Andrew Whiteman’s (as Apostle of Hustle) “National Anthem of Nowhere”.  It was such a surprise to do the eponymous piece from last year’s Apostle record (QRO review) that Canning and Peroff seemed to be learning their bass & drum bits on the spot, or at least remembering them from long, long ago.  But BSS delivered, even as a three-piece.

Things spun further and further out of control as the night ended and the band & crowd kept having more and more fun.  They did a “We’ll never play Madison Square Garden” (QRO venue review) country jamboree (including a few lines of Huey Lewis’ “I Want a New Drug”).  They threw down the extremely new “Water In Hell”, an ode to nineties alt-icons Pavement that was inspired by playing with Pavementer Spiral Stairs (Scott Kannenberg) in Calgary, and was sort of Spiral Stairs-Pavement-ish in grand slacker emotion (does that mean they’ll write a Stephen Malkmus-like song after co-headlining with the main Pavementer (QRO live review) at Siren?…).  And to finish, they polled the audience on what they wanted to hear, with People’s “KC Accidental” beating out record-mate “Lover’s Spit” and Broken Social Scene’s “Ibi Dreams of Pavement” and “Major Label Debut” (a voting result to which Drew replied to the crowd, “You’re living in the past!” – “KC” is named after Drew & Canning’s proto-BSS outfit).

Clocking in at almost an hour and forty-five minutes, it was an epic-in-its-own-way set by this epic band, despite – or perhaps because of the setting.  At about half of the songs, Something For All Of Us… got a high profile, while the band worked out some of the kinks (they claimed they only knew five songs from the record – or two less than they actually played).  All sorts of other side/solo projects got a showing, from ‘Presents’ to ‘Experiments’.  Hot-from-the-oven new stuff made a showing, as did golden oldies.  The only real problem?  There’s no way they can be this good at on Coney Island… 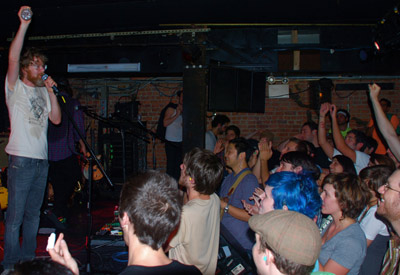 Air France : No Way Down EP