Bruce Springsteen – Letter To You

When you’re a long-running, massively successful artist, what can you do on a new record?... 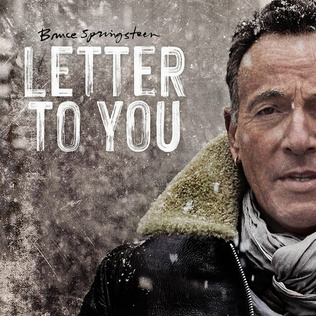 When you’re a long-running, massively successful artist, what can you do on a new record?  How do you make something as worth listening to as your late greats?  Stick with what you’re great at, and you’re just being derivative of yourself.  Try something new, and everyone wishes that you’d stick with you’re great at.  Somehow, Bruce Springsteen squares this circle in an album that is both nostalgic and hopeful, Letter To You.

Recorded with his massive-stars-in-their-own-rights E Street Band, Letter To You is very much a Springsteen record, from the workingman odes that feel more like the seventies (references to union halls & Knights of Columbus) to big uplift.  But his look back is just so powerful on pieces such as intimate loss opener “One Minute You’re Here” and the ‘taking it all in’ tribute to his axe, “House of a Thousand Guitars” (synthesizers might be all the rage, but of course The Boss tributes the ol’ guitar), not to mention his sweet piece to those gone by, closer “I’ll See You In My Dreams”.  “The Power of Prayer” would be mawkish in maybe anybody else’s hands, or his torch song for the people, “If It Was a Priest”, though there are times when Springsteen tips into the overwrought, because of course he does.

It’s all best put together in the killer single that announced the record, “Ghosts” (QRO review), the nostalgia & hope moving & fun like the best of The Boss.  In a terrible year with a maybe great ending, Letter To You is what we needed from Bruce Springsteen.

Billie Eilish – “Therefore I Am”