Bruce Springsteen : Working On a Dream

<img src="http://www.qromag.com/wp-content/uploads/2009/02/brucespringsteenwoad.jpg" alt=" " />The Year of The Boss continues with his successfully varied latest.<br />... 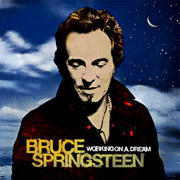 Few American musicians have as widespread appeal as Bruce Springsteen.  He may be New Jersey’s favorite son, but The Boss is hugely popular throughout states blue and red alike.  From eighties classic Born In The U.S.A. to post-9/11 epic The Rising, Springsteen’s gritty, workingman’s rock ‘n’ roll has still involved emotion and skill.  His commercial success has dipped at times over the years (like his happier early nineties phase, or his solo acoustic work), but when you combine him & longtime collaborators The E Street Band, the results are usually gold.  But he’s also managed to maintain critical acclaim, not just in mainstream publications like Rolling Stone but even into indie hipster circles.  And Springsteen manages to keep that up with his latest, Working On a Dream, thanks to greater variety than perhaps ever before.

Usually, Springsteen records are dominated by one or two songs, usually eponymous singles (like “Born In The U.S.A.” and “The Rising”), and pre-release, Working looked to come out that way too, with the title track being introduced at an event for Barack Obama, just prior to the senator’s election as president.  The memorable first single certainly laid out an epic path, tough but uplifting (even more so if the political context is taken out).  Yet Working defied that classification almost as quickly: second single “My Lucky Day” was more rollicking, but it was (original non-album single) “The Wrestler” that really opened up the record.  Written for the critically-acclaimed movie of the same name (starring a reborn Mickey Rourke), it has since been added as a final bonus track to Working, and its detailing of a heartbreakingly broken man has total power in its only limited guitar and piano.

But all this talk of singles takes attention away from the rest of Working.  The record opens unusually with eight minute long epic “Outlaw Pete”, and it proves that Springsteen is one of the few artists who can pull off such a long rock ‘n’ roll piece (similar in lyrics & success, if not actual style, to the long songs of Bob Dylan), as it holds up throughout.  The first two singles are surrounded by maybe the two best (regular) tracks on Working, “Pete” and “Queen of the Supermarket”, a workingman’s sad loss that matches with classic sad Boss.

Between “Queen” and “The Wrestler”, Working is more mixed, both in style and quality.  There’s the pressing rock ‘n’ roll of “What Love Can Do” on the one hand, but that’s followed up by the sad, missing “This Life”, and while “What Love” has a strong group chorus, “This Life” sees Springsteen’s lyrics lost a little amidst the instrumentation (a fate that also hurts “My Lucky Day”).  The grander “Life Itself” and “Kingdom of Days” both slightly get away from what The Boss does best, the former with an ill-fitting guitar solo amongst the eighties nighttime atmosphere, while the latter too orchestral, but the subsequent “Surprise, Surprise” brings an uplift that carries one with hope.

There is a bit of a flaw in how the tracks on Working were listed, as too often similar songs are put one after another (like with “Life Itself” and “Kingdom”), taking away from the record’s variety.  The old-school lo-fi up-blues of “Good Eye” and alt-folk swing of “Tomorrow Never Knows” are both nice changes on Working, but shouldn’t have been set next to each other.  The stripped folk of penultimate “The Last Carnival” has real meaning, but isn’t helped by “The Wrestler” being added after it to finish the record.

However, these are relatively minor quibbles with an album that’s impressively good and relevant.  The first few months of 2009 have shaped up very well for The Boss: playing Obama’s inauguration party and the Superbowl (talk about bridging the red state/blue state divide…), going to be headlining Bonnaroo, Golden Globe win for “The Wrestler” (though he was shockingly snubbed of even a nomination by The Oscars – guess the Academy really doesn’t want anyone to watch it this year…), and critical & commercial success for Working On a Dream.  Bruce Springsteen has been able to stay as successful for so long because his sound was never really ‘modern’, not even in the seventies or eighties, but just earnest rock ‘n’ roll delivered with emotion but not overwrought, and that continues.