<img src="http://www.qromag.com/wp-content/uploads/2010/11/builttospillnov13.jpg" alt=" " />After 18 years of making music, Built to Spill continue to be a most unassuming and prolific mixture of magic and sensibility. ... 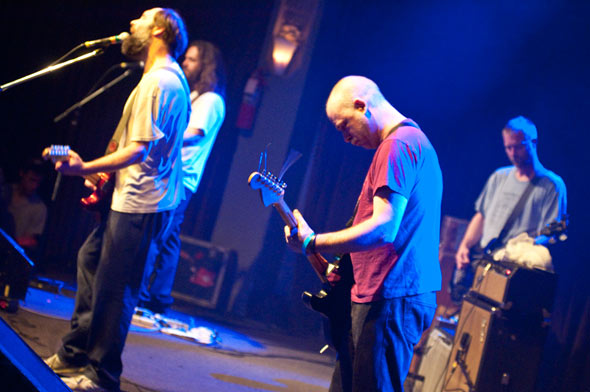 Click here for photos of Built to Spill at 2017 Octfest in Brooklyn, NY in the QRO Concert Photo Gallery

Click here for photos of Built to Spill at 2014 FYF Fest in Los Angeles, CA in the QRO Concert Photo Gallery

Click here for photos of Built to Spill at 2014 Boston Calling in Boston, MA in the QRO Concert Photo Gallery

Click here for photos of Built to Spill at 2012 Governors Ball in New York, NY in the QRO Concert Photo Gallery

Click here for photos of Built to Spill at 2009 Pitchfork Music Festival in Chicago, IL in the QRO Concert Photo Gallery

A wall of guitars fronted the stage at Crystal Ballroom in Portland, OR on Saturday, November 13th.  Doug Martsch commanded the center, flanked by Jim Roth and Brett Netson coloring the landscape, creating the atmosphere, while Brett Nelson on bass and Scott Plouf on drums helped tether Martsch’s transcendent guitar wails.  The band warmed up the crowd and opened with “Traces” from You In Reverse (“Day light can never really hide what’s in life”) and they exposed the guts and the spill began.  They overtook the audience with the anthem, “You Were Right” professing the wisdom and exposing the myths learned from classic rock idols.  Singing from the listener’s perspective, as the indie rock outsider contemplating the validity of his own personal truths in songwriting, Martsch stepped down from the stage and becomes one of the crowd.  Following with the tormented “I Would Hurt a Fly”, the band built up to a controlled tornado of sound that gathered up the whole audience for two hours.  After 18 years of making music, Built to Spill continue to be a most unassuming and prolific mixture of magic and sensibility. 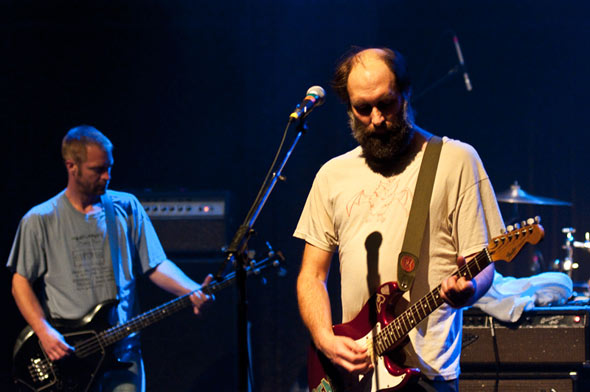 Click here for photos of Built to Spill at 2009 Siren Music Festival on Coney Island in Brooklyn, NY in the QRO Concert Photo Gallery

Click here for photos of Built to Spill at 2008 Wakarusa Festival in Lawrence, KS in the QRO Concert Photo Gallery 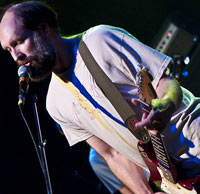 Built to Spill’s trademark, swirling guitars and distorted sound with lyrics scribbled amidst existential crises, remains at the center of the latest effort, last year’s There Is No Enemy.  The last album that garnered this much positive attention was Keep It Like a Secret, from over a decade ago.  There is a cohesion in Built to Spill.  In Martsch’s vision, the music completes the full expression of the words sung, reflecting themes of crisis and loss, or love and discovery.  Music and words combine to say what is common to all but seldom so frankly and earnestly expressed.  Martsch has said that the words are not necessary personal.  The words seem drawn from some collective unconscious, and then there’s the plain English, the vocal intensity, the driving guitar: it feels personal.  Doug sang out, asking the listener in “Untrustable/Part 2”, “When you feel the darkness shining through / What are you gonna do?”  It seems you as the listener get to make your own story out of what you hear.  Whatever the meaning of the songs there is something to the way that Built to Spill crafts these elements that enables the listener to relate it to themselves. 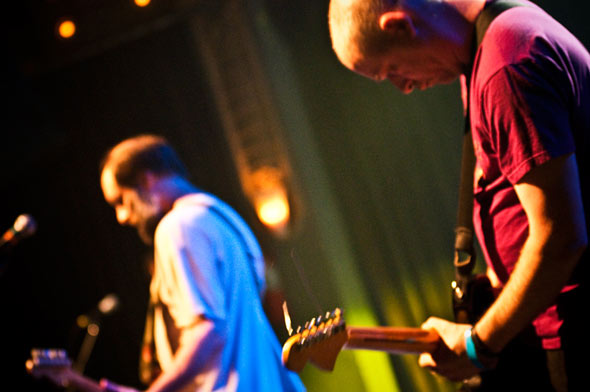 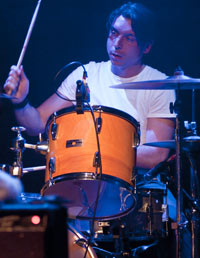 Built to Spill played a balanced set covering albums from There’s Nothing With Love to the recent Enemy.  From songs of love that play like a memory, “Twin Falls” to “Big Dipper” to “The Brontosaurus” that rings of childlike wonder to a punk rock spiked, kick-ass version of “Joyride”, a “drink a lot of beer and climb inside” kind of romp.  Through the angst and self-doubt of tunes from Perfect From Now On, through the eloquent slow drawl of  “The Wait”, from Enemy telling us like it is and reminding “Patience it will come,” Built to Spill shared the range of emotions that is woven into their work.  They finished off the set with a heavy three, “The Plan”, and a scorching “Pat”, inspired by the loss of a friend, and “Carry the Zero”.  Even amidst these songs of confusion and loss, the guitars soared triumphant over the lyrics.  The set ended with the audience ready for more, the crisis overcome by the spirit of an underdog. 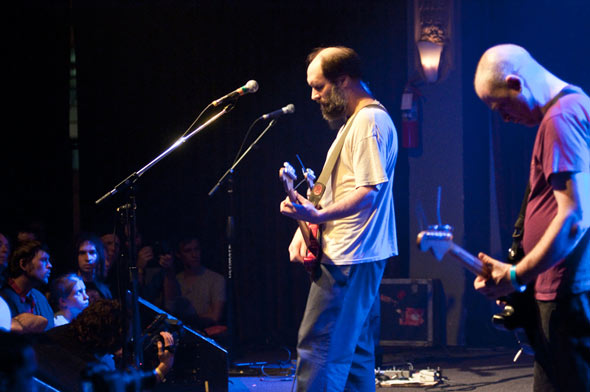 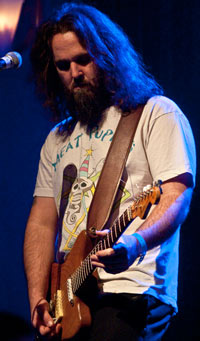 After an amped crowd orchestrated a synchronized double clap stomp and shook the ballroom, Martsch came back out with his acoustic and slide and mesmerized the people with a couple of bluesy lovelies from his solo work Now You Know (2002), “Dream” and “Offer”.  These songs, and the others from this album, are quintessential Doug Martsch.  Much like an art professor professes that an artist must be able to draw realistically before abstracting its subject, this album exposes the solid core of Martsch, a sincere wordsmith and talented guitar man.  There was a moment after “Offer” when Martsch was talking to someone off stage.  His hand signals implied that he wasn’t sure whether he should go off stage or not.  The audience shouted to him “Stay!  Stay!”  And then all of a sudden, Calvin Johnson comes on stage, followed by Ralf Youtz and Wayne Flowers.  And now The Halo Benders are blasting off with “Canned Oxygen”, Martsch and Johnson sing “God Don’t Make No Junk”.  Not all of the younger crowd knew what a gift they were getting, as one was complaining after the show, “Is it over?  What was that?  Is Built to Spill coming back out?”  Johnson did his 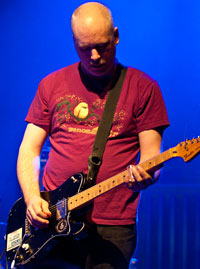 Muppet dance and crazy far off stares, Youtz was screaming along the words while banging the drums.  “Freedom Ride”, Johnson sang out with his classic bass, “Let it ride.”  They busted their halos out with their title song, “Halo Benders”, a “real career ender” it was not.  You could catch Martsch laughing as they played the final song “Don’t Touch My Bikini”, which burned bright and then slowed the show to a stop like a dying plastic record player playing a melting hard rock album.

Built to Spill is consistently an awesome show, whether you are up to date on their albums or not.  They are something to be seen.  For those who attended this show, you may have noticed upon entry that the show was being videotaped and recorded for a future DVD release.  It will be a good one, like a sundae with The Halo Benders encore as the cherry on top. 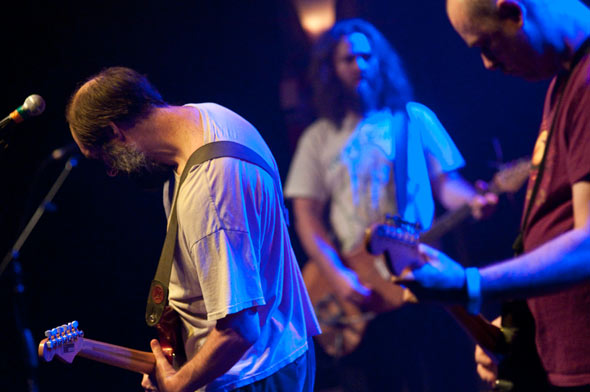