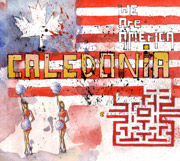 Canada’s Atlantic provinces have always been a bit of a strange-but-forgotten spot on the map of North America.  The first English-speaking outposts in the New World were founded there (and centuries before that, the short-lived Viking settlements once known as ‘Vinland’), drawn by the plentiful cod – cod that started drying up sixty years ago and have basically left them all bankrupt (when the old, but fiercely independent Newfoundland, finally joined the federation, about a century after its foundation).  The various provinces are small not only in population, but also in size, unlike the nation’s other provinces.  They’re also separated from the rest of English-speaking Canada by Francophone Quebec – what would happen to them in the event of Québécois independence is anybody’s guess.  They stretch along the ocean from the southern end of Nova Scotia (which reaches further south than Portland, Maine) to around the small islands of St. Pierre & Miquelon (the remains of French North America, now départements of the Fifth Republic like some specks in the Caribbean) to the northern tip of Labrador (Newfoundland’s long eastern chunk of the Quebec peninsula), which is west of Greenland and even borders Nunavut, the new ‘native peoples’ (read: Eskimo) province that virtually covers the North Pole.  And out of that comes the five young men of Caledonia, and the large & varied We Are America.

Okay, being from eastern Canada, but naming yourself Caledonia (the original Roman name for Scotland) and your album We Are America is a bit much (though Nova Scotia is Latin for ‘New Scotland’), but the Halifax band successfully stretch across various regions of music.  There’s the harmonious alt-rock title track, or the kinda funky “The Plague” & “The Victim”.  Opener “Restless Year” is evocative and haunting, neither over- nor under-done, while “Too Old” and “Same Old Lies” bring a bit of psychedelica.  The sadness goes from the twang of “I’m Tired” to the alt-country carry of “Light Rock Station”, not to mention the restrained fuzz of “Burning the Day”.  “Scott’s House” is some sedate honky-tonk done a bit wry, while finisher “Alabama” is a fading away epilogue.  Going even further is “Winter Drops From Trees”, spoken word by guest artist Tanya Davis that, with Caledonia’s instrumentation, is not annoying, just memorable – but the band also eschews words entirely on the minute-long instrumental “Leaving Ian In New Orleans”.

All of this variety in style does give some variety in quality (roughly the former, in the sentences above, are superior to the latter), and having fourteen tracks certainly helps expand both.  But isn’t that the way with [North] America, too – all the way out to the Atlantic Provinces…