Camden Rocks Festival returned to venues across London’s Camden on Saturday & Sunday, June 1st & 2nd. Camden was madness of course. Not just because of the festival, but...

Camden was madness of course. Not just because of the festival, but just because it was Camden. Within two minutes of leaving the plum coloured tube station building I had been importuned by a group of determined yellow clad Buddhists, watched three very competent buskers, been serenaded by a team of beat boxers, skirted my way round a shouty marital dispute (I’m sure they were in the same place last year – perhaps they haven’t been home yet), refused the chance to pay for a selfie with a green haired, tartan kilted pseudo punk, and been asked to take photos by two stag parties and one of hens.

It was ferociously hot for the whole weekend, and Camden Circus had that hot concrete smell that you get in piazzas in Italy. With nineteen venues and nearly four hundred performances, Camden needs a lot of planning and I had my programme marked up with shows I wanted to see, and shows I needed to see, a mess of scribble and notes and underlinings, with a more or less incomprehensible route map to get me from one show to the next, and I didn’t have much leeway if I was going to get to the first point on my schedule. I was just setting out when my attention was caught by the sounds coming up from the basement of The Underworld. 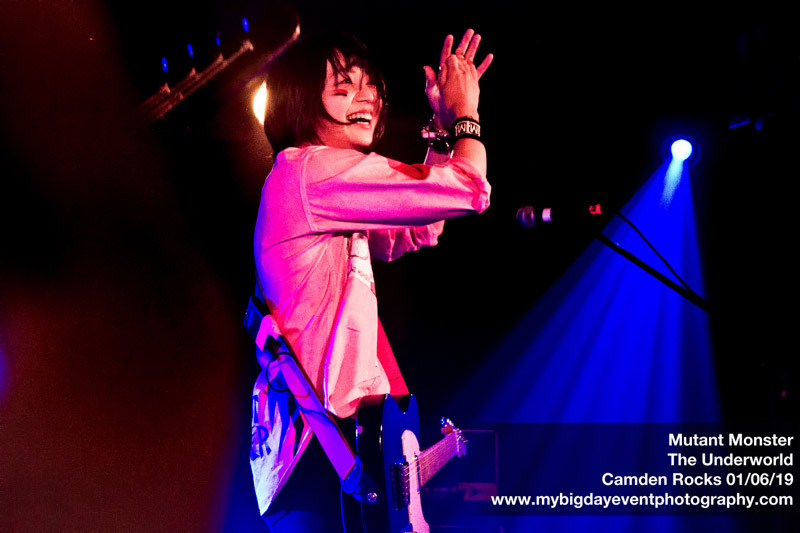 I headed down into the stifling heat and darkness to find Mutant Monster, a Japanese all-girl garage punk trio, whose style owed a lot to the classic British punk they grew up on back in Tokyo. They managed to get a steamy room full of seen it all before Londoners bopping away at one o’clock in the afternoon and I decided to stay to the end. If you get to see them sometime, you’ll do the same.

By the time I was back into the daylight, my map and notes had been reduced to pulp with sweat and the plan was all at sixes and sevens. I had a long walk to get back on track, but it was at that point that I figured that while the point of most festivals is the music, the point of Camden is Camden, and especially its venues. This is after all the music capital of London, possibly of Britain. Liverpool might argue about this, with some justification. Manchester would too and if you like the combination of whiny self-importance and semi-literacy then you may think they have a point.

Camden venues fall into four main categories. There are the big famous places like The Electric Ballroom, Dingwalls and Koko (not in the mix this year, hopefully back next time), where the headliners take over in the evenings. These tend to get very packed by the end of the night and having waited for nearly three hours to miss out on a place in the pit for PiL last year (QRO photos from the crowd) I was happy to swerve these.

Then there are the proper English boozers with music, like The Fiddler’s Elbow, The Monarch, The Lyttleton Arms and The Devonshire Arms. Third category is the caves, black spaces so dark it’s hard to make your way through the members of an almost invisible crowd. The back room of The Dublin Castle, upstairs at The Assembly, Kolis and Fest are the main exemplars, although Dingwalls should arguably be in this category too.

Lastly there are also the venues that are almost too small to be venues – really they’re just rooms: Music And Beans and upstairs at The Camden Eye for example. I’ve been in bathrooms bigger than some of these, but they’re great. So I decided throw all my careful prep to the wind and to go on a tour of the smaller venues, leave it all to chance and watch bands I’ve never heard of and will probably never see again. And have a good time. Camden was a two-day event this year and I had to get a tube back to my hotel, so there was no reason not to have a beer or two in one of those proper old-fashioned boozers I mentioned earlier. Or even three or four. 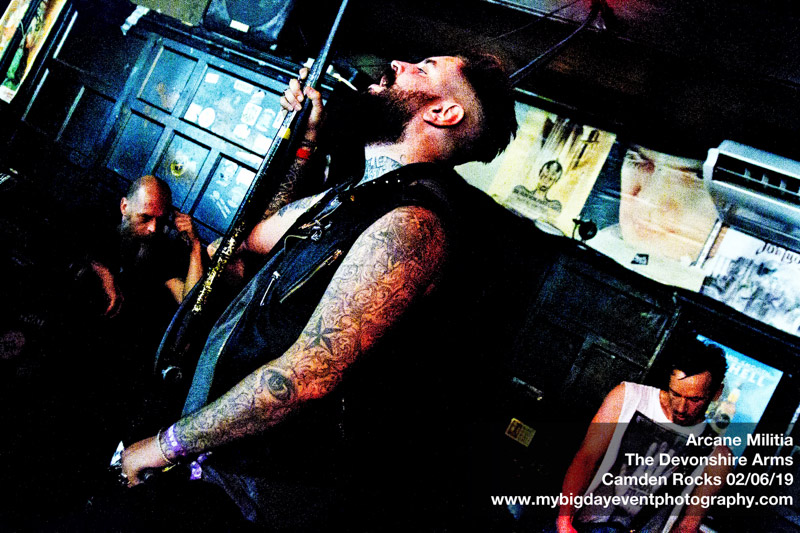 Which is how I came to be in The Devonshire for an explosive set of ‘aggressive love metal’ from Arcane Militia, and in Kolis, a new brutalist concrete cave, for some breathtakingly fierce groove metal from After Smoke Clears. 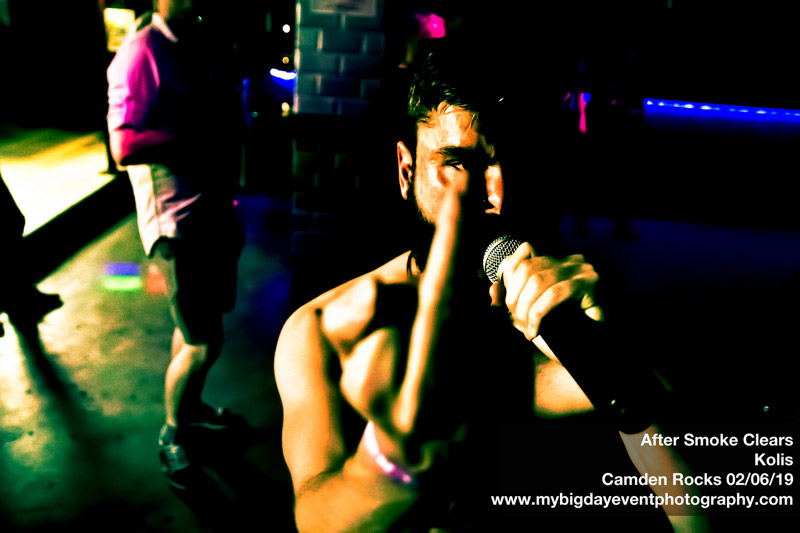 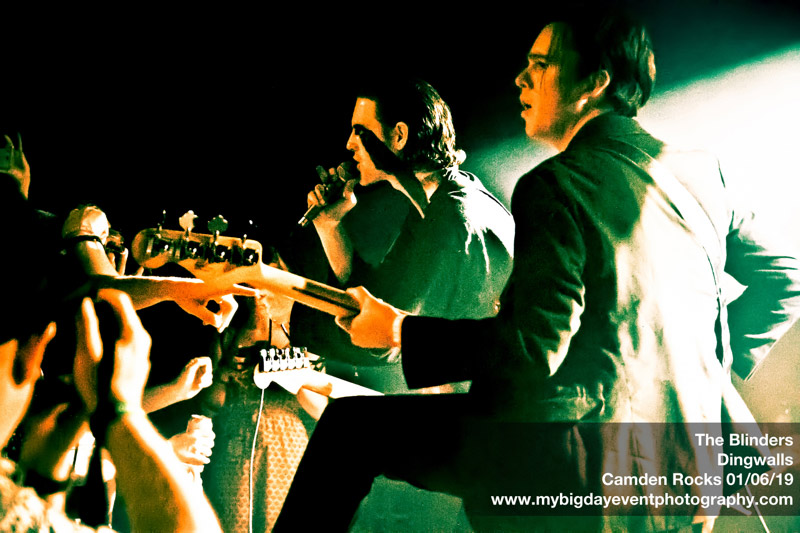 In Dingwalls, another subterranean sweatbox, I encountered my highlight band of the weekend – The Blinders. They’re sort of Nick Cave meets early Stones and their set, brimming with visceral anger, and with their dark suits and face paint, through which vocalist Tom Haywood calls up his on-stage persona, Johnny Dream. I’ve had their 2018 album Columbia, named after the promised land offered to his followers by Charles Manson, on non-stop in the car ever since, and if you like no punches pulled, in-your-face guitar heft then this is for you. 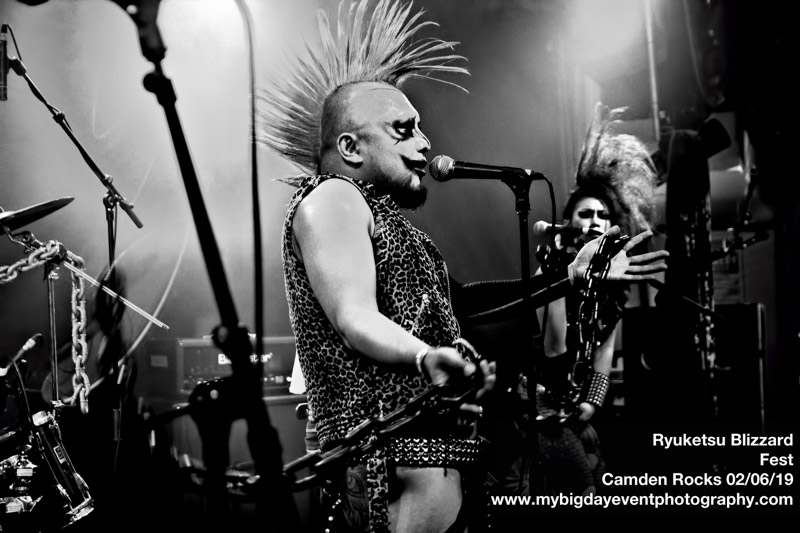 Second highlight were Ryuketsu Blizzard – horror punk all the way from Japan, with huge mohicans, food throwing, bum graffiti and a mankini. It’s the kind of stuff that used to get Mary Whitehouse all worked up and righteous, but the truth is that what it evokes most is a sense of vulnerability and feeling abandoned. They’re great.

In this fashion I had one of the most exhausting and enjoyable weekends of my life, seeing one excellent band after another, all playing their hearts out, because it’s Camden after all, music capital of the world. Well almost.  And it’s madness. So if we’re running again next year, then yes please and definitely no plans.