If you want a contemporary soundtrack to northern California of yesteryear, you can find it in El Camino Real.... 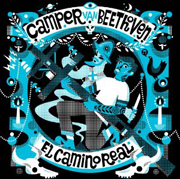 A Silicon Valley internet billionaire has recently gotten onto the upcoming ballot a proposal to separate California into six states, but we all know that is ‘only’ two states (as Pavement put it): North and South. The Bear Republic’s Camper Van Beethoven have long explored their home, from the reunion record/vision of future war between California & Texas, New Roman Times, to last year’s SoCal-influenced La Costa Perdida (QRO review). Now they take extra material from the Costa sessions and head up to NoCal for El Camino Real.

Camino is not an album about Silicon Valley but the old northern California, places like “Camp Pendleton”, “Dockweller Beach”, and “Sugartown”. Yes, this is a record about hippies, but more ‘post-hippie’, and not some jam band-wank, but rather about actual life up there. It’s a messy life, whether in relationships (“It Was Like That When We Got Here”) or just paranoid (following “Classy Dames and Able Gents”), but generally an upbeat and enjoyable one. There are darker and sadder moments, but while those reflect the area, they’re a little off for the record – a song about a failed immigrant community (“Sugartown”) doesn’t quite fit in next to a song about a the dubious reasons to move south (“I Live In LA”). The record does, however, nicely capture the southwestern mix between Western (singer David Lowery – QRO interview – has created another great anti-hero in the twang “Darken Your Door”) and southern, i.e. Latin (sunset closer “Grasshopper”).

While people rave about New Hollywood, Silicon Valley, medical marijuana and wildfires, there’s an older California beneath that all. Writers like Thomas Pynchon captured then & even now, like 1970 Los Angeles in his recent novel & soon-to-be-a-movie Inherent Vice. But if you want a contemporary soundtrack to northern California of yesteryear, you can find it in El Camino Real.

Camper Van Beethoven – It Was Like That When We Got Here