La Costa Perdida has all the complexity and amusing bafflement that Camper Van Beethoven has been known for.... 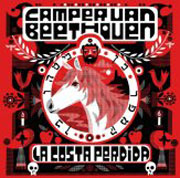 Camper Van Beethoven emerged from post-hippie northern California in the eighties with a complex style that seemed to be both defy and amalgamate the alt-rock sounds of the day, including Latin-tinged folk and even ska – for instance, Jonathan Segel’s (QRO interview) violin was neither old-timey nor post-modern, and the band was known for doing mock covers of contemporary punk acts like Black Flag’s “Wasted” (QRO video).  They split after 1989’s Key Lime Pie, with singer/guitarist David Lowery going on to form the more straightforward alt-country/rock Cracker (QRO spotlight on) in the nineties, but guest spots by various Camper alum at Cracker shows eventually led to not just a reunion but a new record, 2004’s New Roman Times.  Since then, Camper & Cracker have stayed together, both on tour (QRO live review) and at their annual Campout festivals, while its various members have pursued projects inside and outside of these acts.  It’s taken awhile to round up all the Camper members again, but they finally have for their first CVB record since New Roman, La Costa Perdida, which has all the complexity and amusing bafflement that the band has been known for.

While New Roman was conceptually built around the brave new world George W. Bush’s War on Terror was bringing on, La Costa is a less united affair, though there is definitely a California-Spanish theme going through it, from the title of the record on down.  Of course, this is Camper Van Beethoven, so the Latin style can be married to a Scandinavian mock-tragedy (“Too High For the Love-In”), the group’s speedy near-ska (“Peaches In the Summertime”), gringo laborers (“La Costa Perdida”), or even just “Northern California Girls”, which nicely mixes sad and sarcastic as it quasi-updates the Beach Boys tune.  CVB can go from slow country-road (“You Got To Roll”) to relaxed & wistful (opener “Come Down the Coast”) to humorous (“Too High” – whose refrain “Bring me the anti-venom / And make me a sandwich” is up there with any of Lowery’s scatologically awesome lines).

Just as it’s hard to pick a genre for Camper Van Beethoven, it can be hard to get a handle on their sound, and La Costa Perdida having a theme in another language (if not another country – though sometimes California feels that way…) makes it a bit harder to get a hold of than New Roman Times.  But it skillfully puts together all the elements that make CVB so indescribably great.

Camper Van Beethoven – Too High For the Love–in