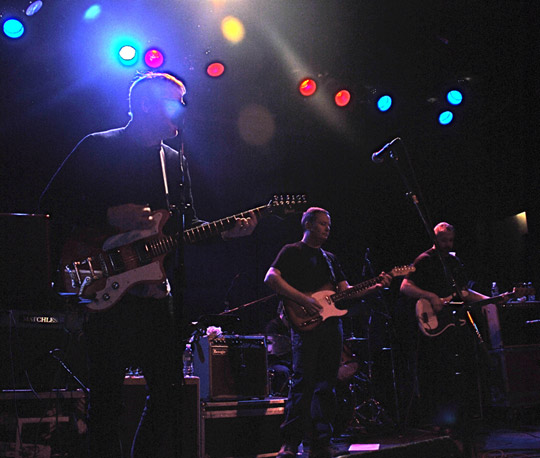 While The Pixies’ reunion at Coachella Music Festival in 2004 was largely considered to have sparked the wave of reunions of seminal eighties and nineties alternative bands, there were a few even older acts who had already beaten Frank Black & Kim Deal not only to the door, but in content as well, putting out actual new material.  Santa Cruz’s Camper Van Beethoven was one such band, putting out New Roman Times that year (and the test-run cover of Fleetwood Mac’s Tusk two years before that), their first new studio record in a decade and a half.  Now celebrating twenty-five years since their first release, Telephone Free Landslide Victory, they kicked off two nights at New York’s Bowery Ballroom on January 9th, 2009 with an extensive set list that excited a loyal crowd.

While both Burma & Mould played pretty firmly in the alt-punk arena (minus ill-advised techno jaunts), Camper Van Beethoven were notorious for crossing all sort of genre lines, mixing punk, hippie-jam, ska, country, and more.  Back in the day, this confused many first-lookers, but it generated an appeal all their own.  Live, both the unusualness and appeal are only heightened.  Violinist Jonathan Segel, for instance, looks even more out of place, but one can even more discern how well his violin fits into Camper’s material.   One can see singer/guitarist David Lowery strumming upwards on his guitar, ska-style, but also how it matches lead guitarist Greg Lisher’s excellent and interesting axe work. 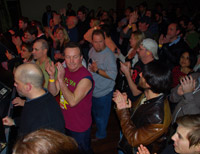 While the set as a whole was fairly evenly balanced between their six studio LP’s (Telephone Free Landslide Victory, II & III, Camper Van Beethoven, Our Beloved Revolutionary Sweetheart, Key Lime Pie, and New Roman Times), the night opened on 1989’s Key Lime Pie, their last record before breaking up.  Still really the band’s finest, one could find no fault in starting with the excellent “All Her Favorite Fruit”, its grand heartbreak enchanting the crowd.  Lowery’s lyrics are always interesting (“Fruit” includes ruminations on being a civil servant in the colonies), but on the following “Sweethearts”, they’re a little more ironic (he even updated the Cold War-era piece, changing “And in the mind / of Ronald Reagan” to “And in the mind / of the president”), which served well to shift the band into more upbeat material.  But the shift was gradual, including two instrumentals (Our Beloved’s guitar procession-meets-fiddle folk “Waka” and Telephone’s hep-stepping plucker, “Mao Reminisces About His Days In Southern China”), and Key Lime Pie’s bigger anthem cover of Status Quo’s “Pictures of Matchstick Men”.  But by the time they told Camper’s “The History of Utah” (seriously – it details the travails of Mormonism’s founding), the air had gotten significantly freak-countrified.

Camper unfortunately wouldn’t return to Key Lime Pie until much, much later, instead mixing the older and newer, starting with Lowery’s hilarious introduction to New Roman’s “The Long Plastic Hallway”:

Back in the early eighties, some of us were in a band called Box O’ Laffs.  One summer, our guitar player moved to Los Angeles to work some summer internship or something like that.  And he started calling us during the summer, saying, “Hey, I’m hanging out with the percussionist from The Talking Heads.  I’ve been playing him our demo tapes, and he really likes it, so we’re gonna get to open for The Talking Heads when they come to Los Angeles in late August.”  We kind of didn’t believe it, but as the day approached, our guitarist was more and more insistent that this was actually going to happen, so we eventually got in our friend Joe Sloan’s pick up truck and drove the four hundred miles to Los Angeles.

When we got there, the guitar player wasn’t really living where he said he was living, and he was actually living in this sketchy part of Highland Park.  It wasn’t really a ‘crack house’ – more of a ‘crack home’.  We sort of realized that something had gone wrong at this point, but hoping against hope, we decided that we would pursue this.  So we were asking this guy who was the percussionist from The Talking Heads these things we thought we should know, “Well, if we’re playing with you guys, how come we’re not in any of the advertisements?”  “How much do we get paid?”  “What time do we play?”  “How long do we play for?”  “When do we load in?”

As we were asking all these things, the guy was getting really frustrated with us, and then finally, he just got really mad, and he said, “Man, I am not talking about that gig, that gig is the fake gig!  I’m talking about the real gig – the real gig is after that gig!  It’s on a flying saucer above Los Angeles!”

And the thing is that he was absolutely right.  The next night, we played on a flying saucer above Los Angeles with The Talking Heads.  True story…

No song could quite live up to that introduction, but “Hallway” couldn’t help but be boosted, either.

From there, Camper played three tracks from 1986’s II & III, then three from 1988’s Our Beloved Revolutionary Sweetheart.  Of III’s three, the freak-atmosphere to “Circles” definitely picked up live, but “Cowboys From Hollywood” seemed a little juvenile.  “Sad Lovers Waltz” was still strong, however, thanks to Segel’s strings, and led well into Beloved’s “Tania” and “Eyes of Fatima (Pts. 1 and 2)”.  The joke-revolution of “Tania” had the crowd’s spirits up, and “Fatima” kept them up. 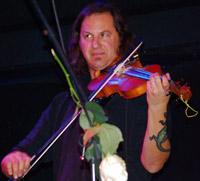 At roughly the sets mid-point, the show did shift, as Camper drew more from outside old favorites, including New Roman Times, instrumentals, and covers.  Roman’s title track isn’t quite as devastating in its look at the future of the U.S. as it was when it came out at the height of Bush’s America five years ago – the whole night was more suited to the following “Militia Song” and its up-pluck nature (the band did let it be known that the sheet music to it – labeled ‘Unabomber’ – and some accidentally-packed razorblades got drummer Frank Funaro kicked off an airplane…).  But then it was back into the past with two ska-like covers of classic punk songs, The Clash’s “White Riot” and Black Flag’s “Wasted” – Camper were known for confusing eighties punks by country-fried their staples like that.

Largely, the second half of the night wasn’t as strong as the first, however.  Old tracks like “Shut Us Down”, “Club Med Sucks”, and even ‘hit single’ “Take the Skinheads Bowling” were, like “Cowboys” had been, a little too young for such seniors – though Telephone’s “Ambiguity Song” held up well in its funny mockery of hip young über-dissolution.  Meanwhile, there were largely too many instrumentals: as a whole, Camper’s instrumentals fit better into their set than most band’s, but back-to-back like with New Roman’s “R ‘n R Uzbekistan” and “The Poppies of Balmorhea” was too much – and even more so going into the encore break, where they played four instrumentals (if you count the “Opi Rides Again” half of “Opi Rides Again-Club Med Sucks”), with only “Club Med” breaking it up.

Live vs. recorded, the happier Camper naturally takes more of a center stage, but that unfortunately means fewer tracks like Beloved’s “One of These Days”, a wistful but not dark piece which shined well in the second half of the set.  In the encore return, the band called an audible, eschewing the finisher from the set list (QRO photo) for the growing and gripping rarity “Seven Languages” (from 1993’s post-break-up rarities collection, Camper Vantiquities) – but not before thankfully returning to Key Lime Pie and its hilarious anti-hero epic, “When I Win the Lottery”.

Camper Van Beethoven playing “One of These Days” live at Bowery Ballroom in New York, NY on January 9th, 2009:

Click here for audio recording from this show thanks to nyctaper.com

With as much material and as wide a scope out of Camper Van Beethoven, there were naturally going to be songs one wished that they played, from Telephone’s other ‘hit single’ “Where the Hell Is Bill?” to classics like “Good Guys & Bad Guys” and “O Death” (many shouts from the crowd for that), not to mention Key Lime Pie favorites like “Jack Ruby” and “Come On Darkness”.  However, they booked two nights at Bowery, and are known to completely revamp their set list night-to-night, jam band-style – and many of the fans were going both evenings.  More notable was the complete absence of any songs by Lowery’s successful post-Camper act, Cracker (QRO live review) – the two bands played together just a few weeks earlier back in California (bassist Victor Krummenacher’s McCabe & Mrs. Miller did get in, but as the opening act – QRO photos).  However, that was hardly necessary or even much noticeable, as Camper have twenty-five years of great material to show off, which they did.

Camper Van Beethoven playing “When I Win the Lottery” live at Bowery Ballroom in New York, NY on January 9th, 2009: