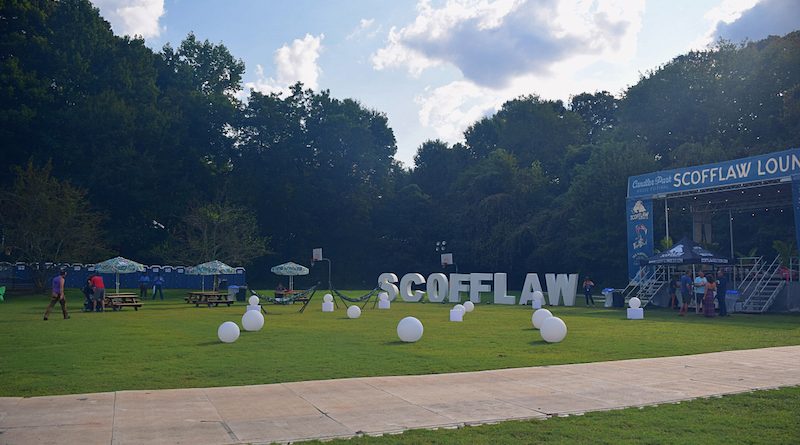 The arrival of September in Atlanta can be a continued thrashing of the Georgia dog days’ ruthless humidity highway, or it can come in on slightly singed dove’s wings with all the real summer of it flamed out like Oscar Wilde’s half-sisters. Compliments of the annual Candler Park Music Festival, September came in on a chromatic concoction of cloud crawls and crowd calls aback two days, Friday & Saturday, 10th & 11th, filled with the kind of music where lyrics mean less than how simple sounds make you feel while sitting in the sunlight.

Featuring a harmonic hue cycle of bands both new and nationally noted, with most deriving from a sickle-shaped swathe of southeastern states, the Candler Park Music Festival is just small enough to still feel like the backyard gathering it very much is for the adventuresome spirits of one of Atlanta’s oldest neighborhoods. Atlanta’s own Voodoo Visionary, a bass-forward jam band with Caleb Followill-like vocal overtones placed against walls of wah, kicked off the summertide ceremonies. Their southern-tinged, tripadelic spin-outs were well-suited to the afternoon skies under which they found themselves. Lyrics such as “Take a sip of the sunshine” rang out in concert with the visual of their sunburst bongos and Bruce Hornsby-inspired keys. Atlanta funk at its finest.

The Vegabonds dropped in from neighboring Nashville and brought their trademark nostalgia-porn-with-a-twang to new ears and elevations ahead of the September 24th release of their next album, entitled Sinners and Saints. A long-respected gaggle of long-haired country boys with everyman stories to tell for days, The Vegabonds never fail to conjure all the best of Bruce Springsteen’s dirt-road flourishes while nodding at Eric Church’s almost-aloof (in the good way) attitude. Lead guitarist Richard Forehand tenaciously brandished a bright blue Epiphone that likewise seemed to call down some colors from the southerly sky.

Candler Park Music Festival would not be the all-inclusive aural affair it has always been if there had not been at least one band born someplace outside the Bible belt. That band, this time, was Boston’s own Ripe, a glad-groove seven-piece featuring the Counting-Crows-with-an-afro frontman finesse of Robbie Wulfsohn – an absolute human festivity of a man whom, to watch, makes one feel as though he must surely have carved standard party music out of mushroom leather and been certain you needed his endlessly sustainable sounds when he did. Imagine The Mighty Mighty Bosstones, but with island brass, day-drunk off pina coladas with Jimmy Buffett somewhere – and see this band if you can. Their convivial cover of “Lola” by The Kinks alone could not have been more endlessly enjoyable.

Bringing more than 25 years’ worth of staggeringly superb stage history with them, Galactic graced Atlanta with nascent New Orleans neo-soul as the closing headliner for Day One. Having mopped the floor with everyone at the New Orleans Jazz and Heritage Festival more times than can be counted, as well as collaborating with everyone from Trombone Shorty to Macy Gray, Galactic is a musical technician’s band – prowess in the skill of the instrument and said instrument’s best presentation pouring from every player ad infinitum. For all who do not yet know: Angelika “Jelly” Joseph always has a voice from the church of the bayou and, this night, had constellations of stardust (literally) on her tights as well. This woman is the very definition of a celestial afronaut, and that of the most astral variety conceivable. Galactic make sounds like lasers over levees and swamp bubbles under a creole cathedral. There is a bespoke bullfrog quality to the call and response between their brass and bass sections, and saxophonist Ben Ellman gave a solo to put out the stars this time around.

Day Two featured highlights from Atlanta’s own Hedonistas, a five-piece boiler of a soul-rock band known along all Georgia’s many Peachtree Streets for making people dance who swear they don’t dance. Their music makes you feel like you are on a sailboat that somehow moves across the grass and rocks, whether there is any breeze or not. True to form, Hedonistas had many seas of feet in motion at Candler Park Music Festival 2021. Moving on up the audio autobahn of Appalachia, The Dirty Guv’nahs, one of Knoxville’s longest-running prides and joys, enthroned a few hundred ears with their signature brand of slippery revel-rock. James Trimble’s voice has enough soul in it to seem like it has been double-tracked even when it is quite obviously coming to you live, and Cozmo Holloway playing slide on a Flying V is never to be missed if possible. The Guv’nahs likewise gave a classy cover of “Satisfaction” this visit, in tribute to the exalted memory of Charlie Watts.

The Infamous Stringdusters, that six-piece Nashville moment where Bill Monroe square dances with The Grateful Dead, closed out Candler Park Music Festival 2021 with all their itinerant Icarian harmonies. Travis Book, the Stringdusters’ double bass-booming melody magician, has Doogie Howser looks but a tent revival of a vox. With the impeccable unity of precision and the river of brotherhood that clearly binds this band in much more than bluegrass, The Infamous Stringdusters brought the only fitting send-off for a sonic weekender that had been all about blending genres and hybridizing common classifications of music.

The conspicuous beauty of OG Atlanta vibes and the division-less eclecticism that lends this city’s original hang-out spots their unusual splendor always provides a place for an equally rare and charged musical exchange at the Candler Park Music Festival. Much of the Civil War’s famous “Battle of Atlanta” occurred on or near the Candler Park sector of the city, and a Union encampment famously resided on almost the precise spot now the freehold of the stage upon which all of these tapestried troubadours tramped. What better coda to cocked-up histories, COVID craziness, and even plain old summer could one ever ask for? It all felt very much like September.