Cap'n Jazz, as a band, were not perfect. Some would even argue their music wasn't either. Their legacy, however, is unarguable perfection.... 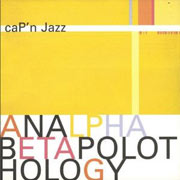 Musical perfection is a very difficult area to pinpoint.  You’ll sooner see politicians agree on a law than you will a group of music aficionados agreeing on the importance of Radiohead.  It is the legacy of an album that truly determines its importance and, thus, whether it is “perfect.”  Take My Bloody Valentine’s Loveless, any of Nick Drake’s work, or even Herman Melville’s Moby Dick, for instance.  When all of these were initially released, the immediate reaction was sub-par, and yet it is admittedly hard to imagine modern shoegaze, folk, or literature without the guidance and influence of these greats.  Whether a world without them would be ‘better’ or not is beside the point; what truly matters here is how these releases shaped the future of their respective genres.  Cap’n Jazz, as a band, were not perfect.  Some would even argue their music wasn’t either.  Their legacy, however, is unarguable perfection, which is what Analphabetapolothology ultimately boils down to.

Formed by Mike and Tim Kinsella in 1989, Cap’n Jazz was a short-lived Midwest jumping-off point for the many projects that would blossom from the Kinsella brothers over time, including Owen, Joan of Arc, American Football, and Owls, just to name a few.  The group only released one album in their short time together and only briefly reunited last year, but what Cap’n Jazz did for music is most definitely worthy of an anthology.

Analphabetapolothology covers nearly everything the band ever recorded, from standout tracks like “Little League” and “In The Clear”, wherein Tim Kinsella shouts the alphabet from A to J halfway through the song before yelling “Lost!” instead of L, to crazy, over-the-top (yet still undeniably awesome) covers of things like the “Theme from 90210” or a-ha’s “Take On Me”.  It is things like this that truly make Cap’n Jazz memorable.  This was a band that was truly in it for the fun of making music however they wanted.

Whether you see Cap’n Jazz merely as a starting point for the Kinsellas’ many other projects or as a heavily influential band that changed ‘90s emo forever and thrust it into the spotlight by adding pop chords and choruses accessible by a much larger crowd, there is no denying the group is a legend among the underground music scene.  Analphabetapolothology serves its purpose beautifully in telling the story of this legend.  For prospective buyers, this should be all you ever need if you’re looking to get into the band and is a must for anyone even remotely interested in the rise of early ‘90s emo and post-hardcore.

Pop Winds – “Drowning In The Dark”