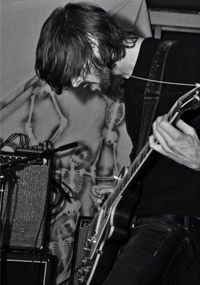 Rounding out the stateside leg of their current tour before crossing the Atlantic to the Old Country, Caspian rolled into Chicago’s Reggie’s for a night of atmospheric post-rock on Wednesday, September 15th.  The last time your correspondent covered the boys from Beverly was a stop in Stuttgart, Germany (QRO review); the band was gigging hard on the momentum of their recently released Tertia (QRO review).  The LP was a fiery and reflective ode to sonic transfiguration.  Being an entirely instrumental ensemble, Caspian has the freedom to explore some compositional nuances that often get trampled upon by the heavy footprint of lead vocals.  ‘Nuances’, though, makes it sound as if these guys were having a tea party onstage; quite the opposite, as the guitar/synth assaults come heavy and hard, alternating with quieter moments, which serve as brief oases of calm, before the eye of the storm passes and the songs whip back into a stormy frenzy.  In Stuttgart, Caspian was all business, ripping through the set very much as you would hear it on the album.

Click here for QRO’s review of Caspian at Jugendhaus West in Stuttgart, Germany on October 22nd, 2009

Click here for QRO’s review of Caspian at Ottobar in Baltimore, MD on January 1st, 2010

Click here for photos of Caspian at Piano’s in New York, NY on April 12th, 2008 in the QRO Concert Photo Gallery

Click here for photos of Caspian as part of the Pan 9 Benefit at Great Scott in Allston, MA on January 9th, 2007 in the QRO Concert Photo Gallery

The band that arrived in Chicago was much more spontaneous.  Fishing through material from their previous three albums – Tertia, The Four Trees (QRO review), and You Are the Conductor – the set proved a good, deep sampling of their sound.  And more than the depth of catalogue, Caspian were ratcheting up the tension of the night with some serious ‘stagecraft’.  Any band will learn a few tricks if you send them out on the road long enough, and Caspian might be one of the hardest gigging bands QRO knows.  The set began with gargantuan frontman Philip Jamieson crouched over a nest of guitar pedals, cast in chiaroscuro light, fiddling with knobs to build a gentle electric crescendo of needling anticipation, until the rest of the band joined in on cue, like a hammer falling, and the room exploded.

Another surprise: a mid-set solo guitar piece by Mr. Jamieson.  These pared-down numbers can sometimes prove momentum killers for less experienced acts, but Caspian pilots its set like a finely crafted roadster.  Accelerating, decelerating on command; turning on a dime; basically owning the stage.  Nearly nonstop touring over the past few years has sharpened their performance instincts and it was hard not to appreciate anything they did Wednesday, except for the by-the-numbers drum circle closer.  But even that gesture was entertaining.  The other acts on the bill – The Alaya Conscious, The Crown and Two Chairmen, and The Felix Culpa – would do well to have paid close attention.  Post-rock, as the genre is often vaguely identified as, is more than ex-metal fans with tribal piercings and black T-shirts.  At its best post-rock own the finest sonic textures of heavy rock, the brash guitars, the martial snare, the driving bass, and lets them breathe in a grander, spacier, more epic compositional architecture.  Wednesday night Caspian hit all those high points, with their own idiosyncratic flair: marvels of the genre.  Don’t sleep on this band, Chicago.