The festival for the venue that isn't there anymore returned to New York, this time in October.... 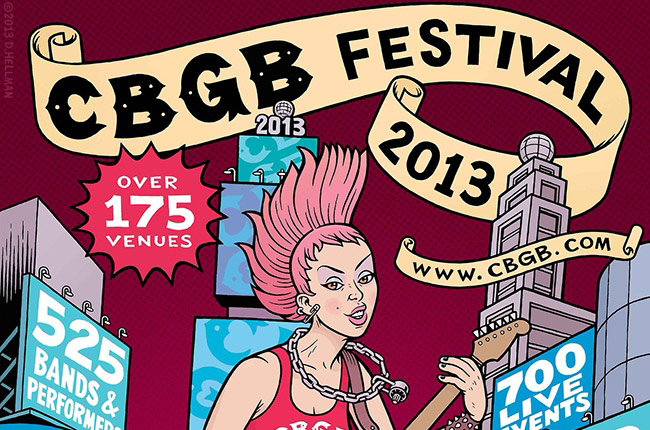 Iconic Lower East Side music venue CBGBs closed its doors way back in 2006 (that space is now the Bowery location of fashion line John Varvatos), but last year it came back, after a fashion, in the CBGB Festival (QRO 2012 recap).  Held in the beginning of July, CBGB Festival was mostly a collection of shows by bands you’d never heard of in tiny places, plus two bigger free shows – one in Central Park, one in Times Square – at the same time.  For 2013, the event moved in time, to over three months later, October 9th to 12th, Wednesday to Saturday, and moved up in terms of size, with bigger bands in bigger venues, and (one) bigger free show in Times Square.

Admittedly, the festival started slow, with little recognizable on the first day, but October 10th & 11th had some choice events, not to mention some nice nighttime shows on Saturday, after the big free event.  Maybe the biggest was Warner labelmates Dale Earnhardt Jr. Jr. & Atlas Genius playing both 10th & 11th at Irving Plaza (QRO venue review).  Atlas made a smash debut this year in When It Was Now (QRO review), while just before CBGB Festival began, Jr. Jr. followed up their own 2011 smash debut, It’s a Corporate World (QRO review), with The Speed of Things.  Meanwhile, Lower East Side regular Jesse Malin performed at Niagara on the 10th and curated there through the 12th, while Spank Rock and Amanda Black brought da nastee to Glasslands (QRO venue review) on the 11th.  And new album tours such as Bell X1’s behind Chop Chop (QRO review) and Meat Puppets behind Rat Farm (QRO review) brought their tours to New York & CBGB Festival on Saturday night (Bowery Ballroom – QRO venue review – and Brooklyn Bowl – QRO venue review – respectively).

But special mention must be made of ‘ladies night’ at a packed Bowery Electric on Friday evening.  Bowery Electric was already ‘ground zero’ for CBGB Festival, as it was the place to pick up your badge, and has long tried to capture some of the legacy of the old CBGBs (which lay only a block away).  On the 11th it was sold-out for a show that began with The Prettiots and Bad Girlfriend, but was cramped for Puss N’ Boots – because that’s Norah Jones, Sasha Dobson, and Catherine Popper.  Of course, it was hard to tell that’s who it was, because Bowery Electric was so packed (literally the back to the curtain that divided the downstairs space from the stairs to it).  Putting her own name on the bill was the evening’s closer, Nicole Atkins, who was playing a special show to debut new material she has been working on since 2011’s Monde Amore (QRO review).  Atkins had a full band, including two back-up singers, and a coat/cape that was draped on her in an almost James Brown style (“Just came from Comic-Con last night…”).  The new stuff admittedly sounded similar to the old stuff (if ain’t broke, don’t fix it…), but there was the disco-funky “Girl You Look Amazing” and another “about trying to read Marcel Proust – and just not digging it…”  After label issues, Atkins is trying her hand at crowdfunding/Kickstarter for Slow Phaser, hopefully to be out early next year. 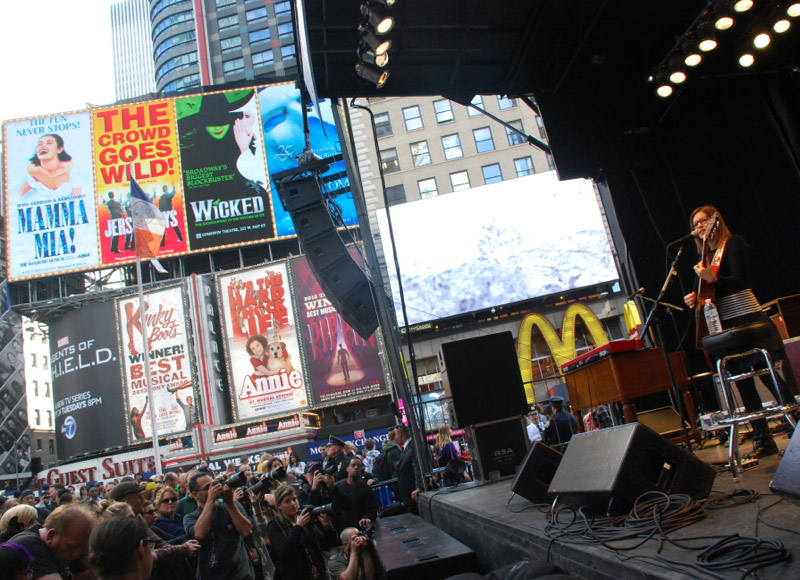 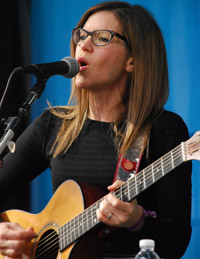 Still, the big event was during the day on Saturday, in Times Square.  Like last year, CBGB Fest had two free stages on Times Square, a few blocks apart on Broadway.  And it was again broken into an early and late segment, with only acoustic sets in the 2:00 PM to 4:00 PM block (amplified shows would have conflicted with the matinee performances on Broadway).  The line-up, however, had taken a definite step up – while last year had a few good indie bands (Clap Your Hands Say Yeah, Superchunk) at best (the less said about Upper West, the better…), this year’s event, while moving more mainstream, had much better overall quality.  Starting off was Lisa Loeb solo, and yes, she did her nineties hit “Stay” – even mentioning that it was written on 52nd Street, then given to Ethan Hawke, who used it in his Ben Stiller-directed movie, Reality Bites.  Loeb also did songs off her new album, No Fairy Tales, including closer “The 90s” that someone once told her she should write about (which actually didn’t look back with rose-colored glasses). 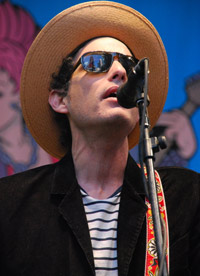 The Wallflowers – a.k.a. Jakob Dylan and his backing band – sounded about what you expected, good and skilled, if definitely middle-of-the-road.  He/they wisely opened with “Three Marlenas”, his other ‘early hit song’, leaving main hit “6th Avenue Heartache” until later – like Loeb, he joked about playing it in this location, as he said it was the closest he’d ever get to playing on the ‘Avenue of the Americas’.  Dylan also covered “What’s So Funny About Peace, Love & Understanding”, sounding very Elvis Costello, but suppose everyone but Nick Lowe sounds like Elvis Costello when doing that song (or at least should…). 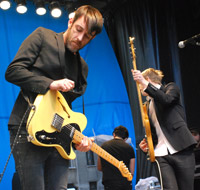 Over on the North Stage (which this year had been moved a block, so it was no longer in front of Mamma Mia, instead Late Show with David Letterman – but it was a weekend, so no conflict) was a thing called Divine Fits.  A sort of indie ‘super-group’ comprising of Britt Daniel (Spoon) & Dan Boeckner (Wolf Parade, Handsome Furs), the band’s live show is limited to their one-and-only debut album (QRO review), but they’ve got a strong presence live, especially Boeckner’s energy (with the probably more famous Daniel curiously playing more second fiddle – i.e., more often on bass).  A lot of people in the crowd were asking the name of the band, and while its not an easy one to say during a loud show, a lot of passersby took notice. 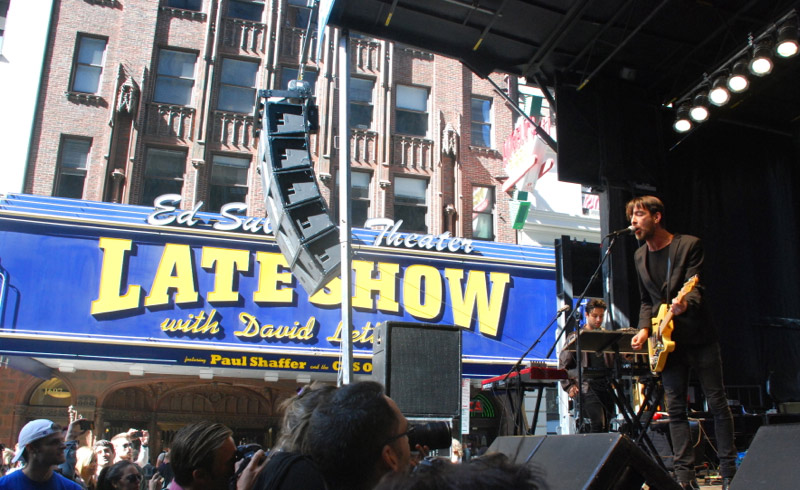 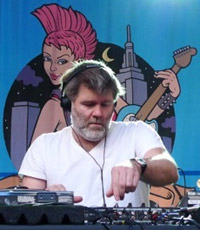 After the afternoon break, CBGB plugged in returned with a DJ set by James Murphy.  Admittedly, DJ sets are never that interesting, and you probably want LCD Soundsystem to get back together, but if you’re going to listen to a DJ set, might as well be from one of the founders of the dance-punk scene, and if Murphy’s gonna be doing something that isn’t LCD Soundsystem, might as well be DJing.  Meanwhile, Grizzly Bear provided the ‘locals gotten big’ portion of CBGB at the North Stage with their well-worn wonderful harmonies. 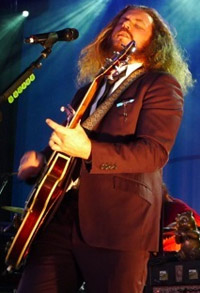 And then came My Morning Jacket, maybe the biggest alt-country act out there this side of Wilco, to headline Times Square.  In only eight songs, they packed a whole lot in – getting by with a little help from their friends.  Afrobeat orchestra Antibalas provided the horns, while Brittany Howard (Alabama Shakes) and Merrill Garbus (tUnE-yArDs) came on to reprise their Late Night with Jimmy Fallon cover (note: this was at the South Stage, not in front of the Ed Sullivan Studio…) of Fela Kuti’s “Trouble Sleep Yanga Wake Am”.  Oh, and then Jakob Dylan returned to the South Stage to join My Morning Jacket in their cover of “Don’t Do It” by The Band (who had included that ‘other’ Dylan, Jakob’s dad – maybe the best way for the son to cover his father: a song from his dad’s sometimes Band, covered while guest-spotting with another band, who had indeed just toured with Dylan senior). 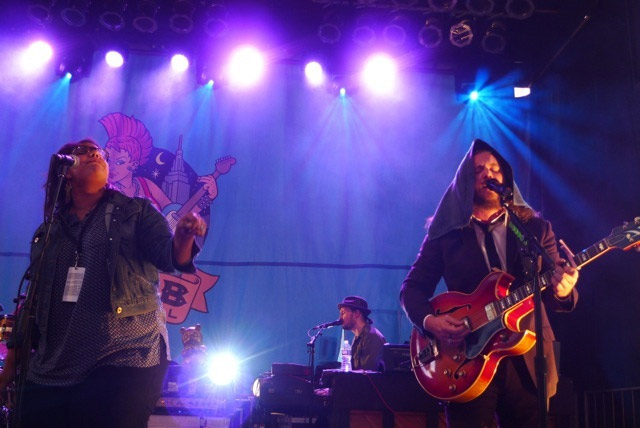 The CBGB Festival still seems a little randomly put together, with lots of acts in lots of places that aren’t CBGBs, and then a big free show in a place that might be the opposite of CBGBs.  Other than Matt Pinfield referencing the place (where he went to as a kid, ‘cause he wouldn’t get carded & drinking age was still 18…) and the new CBGB movie being screened at the festival (to mixed reviews – but it’s got Malin Ackerman as Debbie Harry, and she’s great on Childrens Hospital…), the connection is a bit thin.  And why, exactly, move it from the middle of the summer to the week before the similar-but-bigger-and-older CMJ (QRO preview)?

But those are relatively minor quibbles about bringing a music festival to a city that’s got a lot of music, but not enough festival – and for keeping the spirit of CBGBs alive. 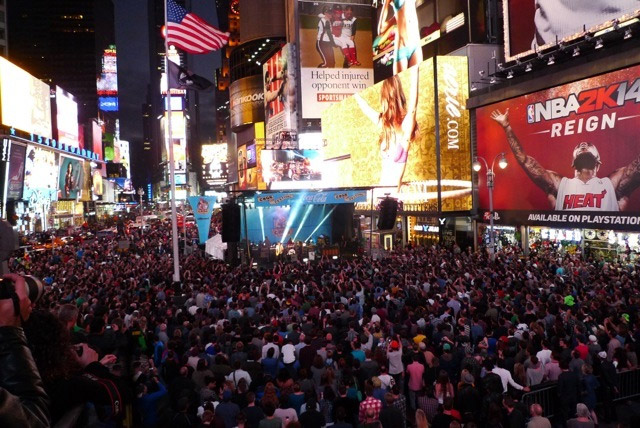