<img src="http://www.qromag.com/wp-content/uploads/2010/11/ceelogreentheladykiller.jpg" alt=" " /><i>The Ladykiller</i><span style="font-style: normal"> is a rich, dynamic album that will both succeed commercially and kill it in the critical acclaim department</span> ... 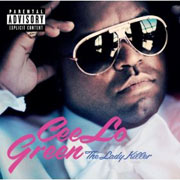 In the past five years, Cee Lo Green has enjoyed major commercial success with Gnarls Barkley, which cemented his status as an exciting (and bankable) outlier in the soul/hip-hop world.  He set the bar high for himself with the two Gnarls Barkley releases, and he’s going to have to work even harder from here on out, because The Ladykiller is a rich, dynamic album that will both succeed commercially and kill it in the critical acclaim department.

The album’s opener, “Bright Lights, Bigger City”, has a disco string section and employs a bright, optimistic synth that sounds a little like Van Halen’s “Jump”.  The song, which is the second single of the album, may give the impression that what’s to follow in the next thirteen tracks will be just as expansive, shiny, and radio-ready.  And at least half probably could be on the radio, but not all are as hopeful or (seemingly) simplistic lyrically.  Everyone can relate to the excitement of going out on the town.  But not everyone draws a parallel between sleeping with someone and slaying them, a theme which the film noir-esque “Bodies” explores.  It’s tongue-in-cheek, sure – the album uses the James Bond films as inspiration, with Green positing himself as, of course, a Ladykiller.  The James Bond theme is also admittedly sort of a ‘done’ one.  But Green’s bitterness is what makes even the cliché of a ‘Ladykiller’ compelling, and what makes a song like “Bodies” smartly sinister.

This bitterness could not be more apparent than on “Fuck You”.  The first appearance of doo-wop on the album – but far from the last – makes its entrance here.  The arguably overused, current Motown sound dominates the record, which borrows producers from Amy Winehouse and Adele.  But when the compositions dip into retread territory, Green yanks them back with his explosive presence and scathing lyrics, as he does here: “I pity the fool who falls in love with you / Oops, she a gold-digger / Just thought you should know, nigga.”  It also doesn’t hurt that when he jumps to the second on the word “fool,” you’d swear you were listening to Al Green.  His vocal affectations throughout the album pin him as one for showmanship, which is no surprise given his musical beginnings singing in church.

Green has an uncanny ability to skewer those who have let him down, including himself.  He also does a lot of pleading.  On “Please”, a (until now) relative unknown named Selah Sue plays Martina Topley-Bird (QRO album review) to Green’s Tricky (QRO photos).  The song begins with the same mid-‘60s sound, but this is nothing like a slow dance at the prom.  The addition of record crackle and ambient sounds, coupled with smoky, too-close-for-comfort production, bathe Green’s pained lyrics in its ash: “The man in the mirror / He won’t even look at me.”  The Ladykiller is much more concerned with love than the mental illness-heavy subject matter of the Gnarls Barkley albums, but there are still traces of the issue of distorted self-image to be found here.  He says later in the song, “Sometimes you’ve got to moan for love.”  Green knows how to moan, and uses his elastic tenor to do just that on The Price Is Right-sounding, horn-heavy “Cry Baby.”  The well rounded, crossover elixir that is “It’s Ok” demonstrates a more forgiving and reflective side.

The straightforward pop and emotional tenderness of “Wildflower” comes as a bit of a surprise, but this and a few other sweet love songs prove that he has just as much warmth and sincerity as snarkiness.  The Band of Horses (QRO live review) cover “No One’s Gonna Love You” is strange, and will probably divide audiences.  Anyone who holds the original sacred might find Green’s version a little brash, but it’s an ambitious choice.  It’s that ambition that makes The Ladykiller a solidly intriguing work, even when it’s sometimes steeped in overproduction.  Green has always maneuvered the fickle pop music scene by being authentic, and being authentic doesn’t always turn out so well for musicians in the mainstream.  Luckily for him, being himself includes singing like his life depends on it, penning clever lyrics, and flaunting his vulnerable side – which at the moment, thankfully, seems to be his only one.