Even now, two years after his death, Bowie is as important as ever, a major draw, as the ‘Celebrating David Bowie’ tour proved.... 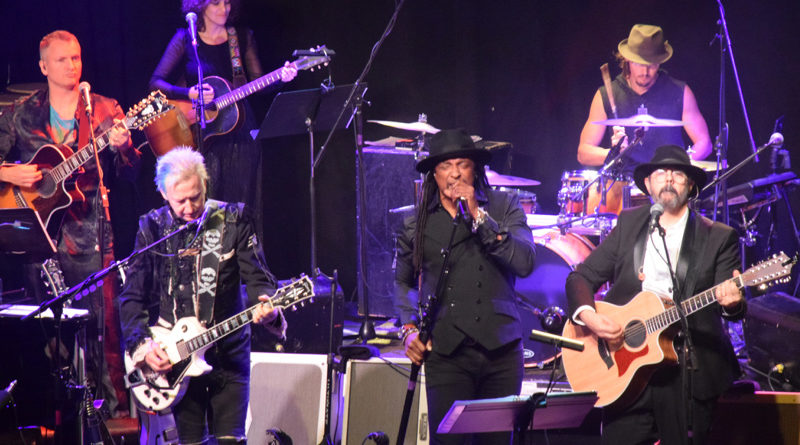 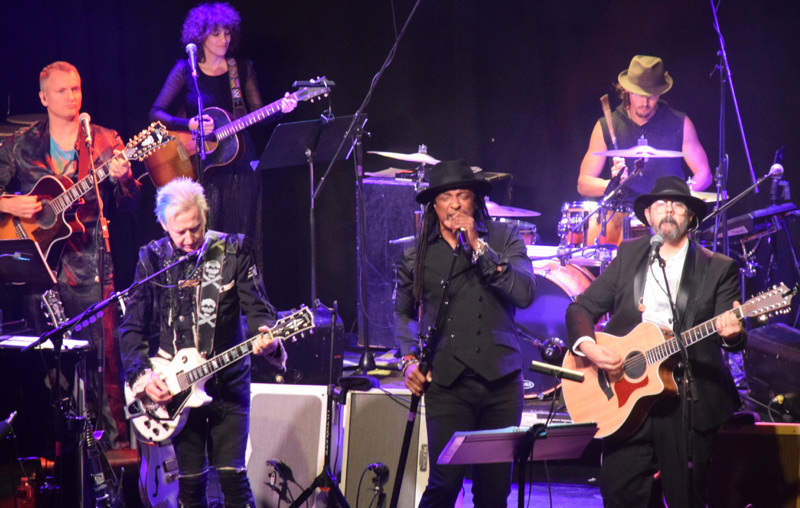 As successful musicians get older and turn into ‘icons,’ they usually struggle for contemporary relevancy. “Their best days are behind them,” “Who cares about their new stuff?,” “Legacy act,” “Should retire,” etc. The Rolling Stones may still be touring, Paul McCartney may still be making music, but do you really want to hear any songs from them made after the seventies? Yet some classic artists still stay relevant, stay important, not just for their old fans & music but newer listeners & songs, perhaps no one more so than the one-and-only David Bowie. Even now, two years after his death, Bowie is as important as ever, a major draw, as the ‘Celebrating David Bowie’ tour proved at New York’s Irving Plaza (QRO venue review) on Monday, February 12th. 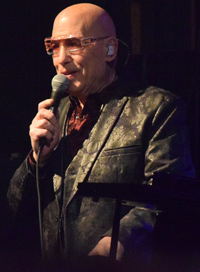 The tour was organized by Bowie’s longtime keyboardist Mike Garson, who recruited other Bowie collaborators and more to play the icon’s music. While they play the hits, they don’t just play the hits, but also bring in some less-heard material. Indeed, the evening started with what Garson noted was the closer to Bowie’s last tour (with Garson), “Bring Me the Disco King”, off of 2003’s Reality. It was just Garson and singer Bernard Fowler (best known for his longtime contributing to The Rolling Stones) on stage, an interesting way to open the night, but a good move – it would have been hard to pick which classic hit to open with, so instead threw a curveball. It also was almost the only point in the set list when it could just be Garson + singer, the rest of the band coming on afterwards. 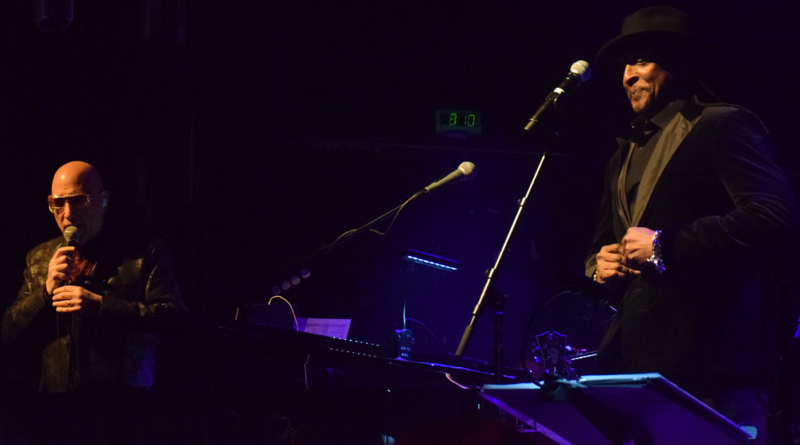 The band was an impressive one, and there were also more than just one singer. Fowler sharing duties with Living Colour’s signature Corey Glover, younger songstress Gaby Moreno, and Joe Sumner (another younger singer, though he’ll always be best known as being Sting’s son…). It was notable that Bowie’s music could have singers black or white, male or female. Also, they didn’t attempt to just do their best Bowie impression or copycat, but played to their own strengths.

After “Disco King”, the group did head into the Bowie hits. Diamond Dogs’ “Rebel Rebel”, The Rise and Fall of Ziggy Stardust’s “Moonage Daydream”, and Young Americans’ “Fame”, before Glover came in for Hunky Dory’s “Changes” and Moreno on Space Oddity’s “Space Oddity”. Of course there were so many sing-alongs, like for “Changes”, from the packed and older house (“Look out you rock ‘n rollers / Pretty soon you’re gonna get older…”). Other than technically 1969’s “Space Oddity” (which famously the BBC used to accompany showing the Apollo mission to the moon – and now is playing forever in space out of the Tesla car Elon Musk just shot into space), these and the following “Quicksand” (Hunky) and “Stay” (Station To Station) all hailed from the seventies, Bowie’s admittedly best and most fertile period. But Glover gave a more funk-punk spin to “Changes”, and the female vocals of Moreno particularly worked on “Oddity”.

Garson would point out when a song was a rarity, such as the Oddity b-side “Conversation Piece”, which only really came to light as an extra on 2002’s Heathen, a darker, conversational Bowie, sung by Moreno. It was followed by “Can You Hear Me” from Young Americans, like “Quicksand” a less-known piece from a well-known record. But then came the actual “Young Americans”, and it was back to the big hits & sing-alongs from the (not young) audience. Admittedly, Moreno’s rendition of the apocalyptic “Five Years” didn’t have Bowie’s desperation, but really couldn’t (that piece is particularly relevant again, with the BBC/Hulu series Hard Sun basically taking its ‘five years until the end of the world’ concept and making a show about it – as opposed to the Bowie-inspired BBC throwback series Life On Mars and Ashes To Ashes). “Station To Station” is another familiar song in the Bowie canon, but Garson pointed out that Bowie himself rarely ever sang it live. Similar with “Lady Grinning Soul”, one Bowie never sang with Garson (this time with Sumner on vocals, which Garson joked, “I promised him I wouldn’t say who his dad is, but you know him… Rhymes with ‘wing’…), the middle of three from Aladdin Sane, which Garson said was his self-interested favorite record, because he went from playing for five dollars an hour before it (“maybe I will again tomorrow…”), including “Time” and “Aladdin Sane”. “Sane” had extended solo from Dave Liebman on alto sax, with Garson before it talking about Liebman working with Miles Davis and David Bowie, not to mention doing weddings & bar mitzvahs with Garson when they were kids, and getting into a fistfight because Liebman would stand in front of him – but was behind Garson this night…

Another rarity was Station’s “Wild Is the Wind”, a Johnny Mathis cover that was done as a duet between Fowler and Moreno. The set then went into the encore break with hits, Sumner doing his best “Ziggy Stardust” (tied with Spinal Tap as the greatest fictional rock stars – sung by the son of real rock star, who was Alan Moore’s inspiration for Hellblazer’s John Constantine, as opposed to Bowie, who was Neil Gaiman’s for his Sandman interpretation of Lucifer), Glover on “Suffragette City” (some older female fans were going to leave after “Ziggy”, but had to stay when they heard the start of “Suffragette”…), and Sumner again on “All the Young Dudes”, Mott the Hoople’s glam anthem that Bowie actually wrote, and reclaimed as his own (though the crowd seemed more in the anthemistic mood).

The encore return had guitarist & Bowie collaborator Gerry Leonard perform Tonight’s “Loving the Alien” entirely solo, a moment even more haunting that the similarly stripped “Disco King” open (those two were also the only songs that dated after 1980). And the evening closed with two must-plays, Hunky’s oh-so-classic “Life On Mars?” sung by Sumner, and Fowler for Heroes’ ““Heroes””.

Of course in a set celebrating such an iconic artist with such a storied discography, there are many songs that were missed. It was notable how focused on the seventies the set list was – even the house music seemed to notice, as when the lights went on the speakers started playing “Modern Love”, a missing hit, from 1983’s Let’s Dance. Also missing was “Let’s Dance”, plus anything from never-played-live recent records The Next Day (QRO review), swan song goodbye Blackstar (QRO review), or last year’s posthumous No Plan EP (QRO review).

In last year’s Justice League movie, there was a shot of the Daily Planet front page questioning the recent alien deaths, “Did they return to their home planets?” There were three pictures, the center Superman’s, the right’s Prince’s, and the left’s David Bowie’s. Even after passing, Bowie’s presence lives on. This artist of the future has a truly relevant future. 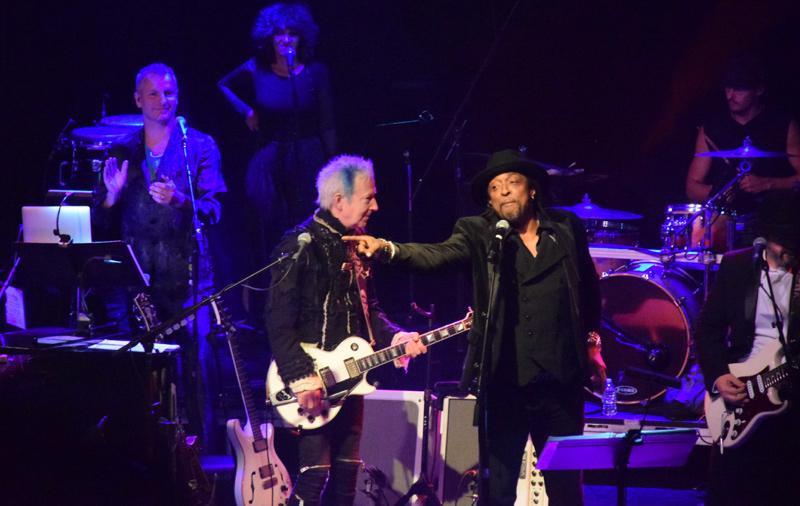 Superchunk – What a Time To Be Alive