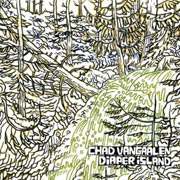 Chad VanGaalen has always been a man who draws people in with his acoustic hooks and crazy animated music videos.  All of his albums run the standard indie-pop mantra of having a few slow songs for every faster, catchier song, but it’s the latter that always tends to become the album’s hit single and get a wacky video.

That’s probably what makes VanGaalen’s latest feel so out of place.  The chosen single “Peace On The Rise”, is a slower song with no discernable hooks.  Even the animated video for it comes off as much more constrained than the rest of the man’s videography.  As opposed to random objects in a constant morphing warp that walk the line between offensive and just plain weird while a catchy melody holds it all together, the viewer is instead treated to a couple alien tribesmen inspecting ant-like creatures crawling amongst cigarette butts and barren soil while the title track acts as unnoticeable background noise the entire time.  The inclusion of a discernable plot and an underlying message in a Chad VanGaalen video isn’t frowned upon, per se.  It just seems out of place.

Official video for “Peace On the Rise”:

In a way, Diaper Island as a whole is like that music video.  The songs are there, and they each have the pop structure nailed, but none of them will stick with you.  Even after a few listens, attempting to recall any particular melody on the record becomes difficult.  You would never have this problem after listening to “Clinically Dead”, “Flower Gardens”, or “City of Electric Light” more than once or twice.

This is VanGaalen’s weakest release yet.  If restraint was the intended purpose, it does not work here.  His songwriting merely comes off as lazy and not worth revisiting.  The album simply exists without reason, like a collection of rare B-sides that only diehard fans would be interested in.

MP3 Stream: “Peace On the Rise”

The Pains of Being Pure at Heart : Live