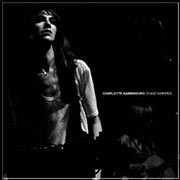 Stage Whisper is an odd double album: one half, an eight-song mini-album, the other, eleven live tracks of material from her previous two albums, 5:55 and IRM.  The eight studio tracks feel very much like the dregs of IRM, an exceptional record in itself.  The majority are b-sides from those Beck-induced sessions, where the musical-chameleon-turned-producer (QRO album review) channelled Gainsbourg’s impetus from recent events in her life, to create a highly disturbing and beautiful album.  So, the dregs are not so bad.

B-side compilations are so often a moneymaking ploy.  However, for a collection of rejections Stage Whisper has some impressive moments.  “Terrible Angels” is evocative of IRM’s “Trick Pony”, as is “White Telephone” to “In the End”.  For those who enjoyed Gainsbourg’s last, and arguably best, album, Stage Whisper will certainly be rewarding, since it contains the same chaotic rhythms and ethereal instrumentation.  “All the Rain” is about as entwined ‘hard industrial’ beats and medieval instruments can get, whilst “Paradisco” has the French minstrel impressively in handclap, funk/trance mode (there will undoubtedly be a remix).  Even George Harrison would be proud of the way sitars and guitars combine nicely on “Anna”.  Charlie Fink (Noah and the Whale – QRO live review) makes an unremarkable appearance on the horribly saccharine “Got to Let Go” – one of the weaker moments of the record.  Here she sings predictably: “You’ve got to be strong when they call it a day / Got to realise when there’s nothing left to say.”  Similarly, Gainsbourg’s usually monotone delivery falls short on the melodic steps of “Out of Touch”.  It is clear that she is at her best when singing in edgier, darker terrain, which she does so beautifully on the thin, acoustic “Memoir” to close the first half of the record.

As for the live half, there isn’t much to say.  Gainsbourg is vocally average and accentually confusing (French/British/Australian/American) in the live environment.  Her band is acceptable live, but could have done with the seasoned guidance of the ever-elusive Beck.  There are exceptions such as the noteworthy rendition of “IRM”, outdone only by the cosmologically eerie “Af607105” and “Voyage”.  Unfortunately, the latter half of Stage Whisper is permanently stained by the inclusion of an awfully twee version of Bob Dylan’s “Just like a Woman”.  Stage Whisper holds true to the avant-garde obscureness of the Gainsbourg musical legacy and is a must have for any fan of that scandalous family’s artistry.  Though, it would have been more alluring had it been a cheaper release, sans the live half, and modestly called Whisper, an EP length collection of b-sides.