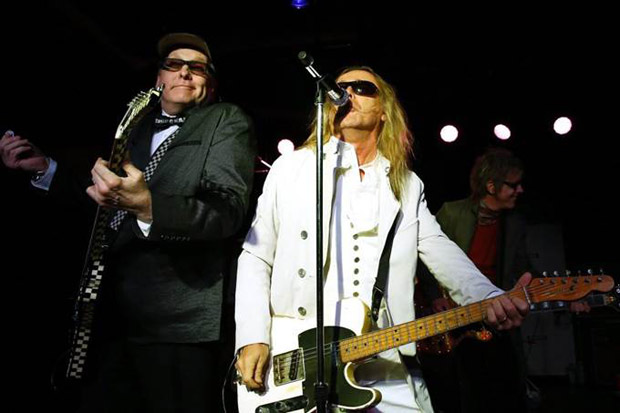 ‘Big in Japan’ – the idea of an American band that is not the successful at home, but seemingly inexplicably beloved by Japanese audiences, is an old one.  It’s kind of the musical equivalent of not-that-successful American comedians who are randomly beloved in France.  That was originated by Jerry Lewis (David Hasselhoff’s popularity in Germany is a whole ‘nother issue…), but ‘Big in Japan’ was begun by Rockford, Illinois’ own Cheap Trick.  The band struggled for fame in their native country in the late seventies, but was greeted with Beatlemania-like adoration from Japanese fans when they came to the Land of the Rising Sun for two dates, April 28th & 30th, 1978, at The Budokan in Tokyo.  It was memorialized in the iconic At Budokan record the following year – originally just a promotional release in Japan, interest in the States and elsewhere brought worldwide pressings, launching Cheap Trick into the kind of stardom at home that they already had in Japan.  For the thirty-fifth anniversary of the performances, Cheap Trick played New York on April 28th, at the John Varvatos Bowery store. 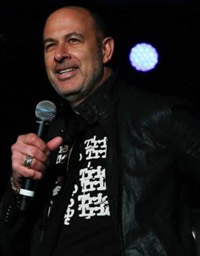 Playing a fashion line clothing store for the anniversary might seem odd, but that spot is the space of the old CBGB’s – the birthplace of American punk rock which was making its own iconic name right around the same time as Cheap Trick were, half a world away.  The space is still a small one, with only fifty tickets put up on sale (bought by longtime fans from far and wide) – the rest went to VIPs & other friends of either the band or John Varvatos.  However, the whole event was streamed live on Livestream, as Cheap Trick played the April 28th, 1978 set in full.

The streaming did meant that the space for fans in the already-small John Varvatos Bowery was shrunk even smaller, as room at the front and around the soundboard was taken up by the video equipment – but at least you knew exactly when the band was going to go on while you waited in the tight scrum up front.  The crowd was unsurprisingly older, though not without rebellion – some sort of fight (or at least shoving match) started at one point, and right around the same time someone else put out a joint (note that these happened within feet of the well-dressed security).  There were no high-pitched girlish squeals like on At Budokan, but the crowd was definitely cheering. 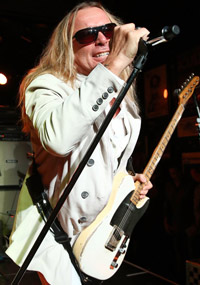 Of course helping that was the free drinks, though the folks up front were there for the music, not the liquor (it was very difficult to get back to you spot after you got another round anyway).  The long, thin nature of John Varvatos Bowery, plus the long bar on one side, did mean that most people were far back, or even watching on the screen in the back – but it was a great live stream to watch (and it’s not like you couldn’t hear the band…).  There were even some celebs slumming with the hoi polloi, like Gary Clark Jr. (who’d just played John Varvatos Bowery earlier in April – QRO review), master of partying Andrew W.K. (QRO live review), and even David Immerglück of Counting Crows (QRO live review) and Cracker (QRO spotlight on) – plus apparently the CEO of Macy’s… 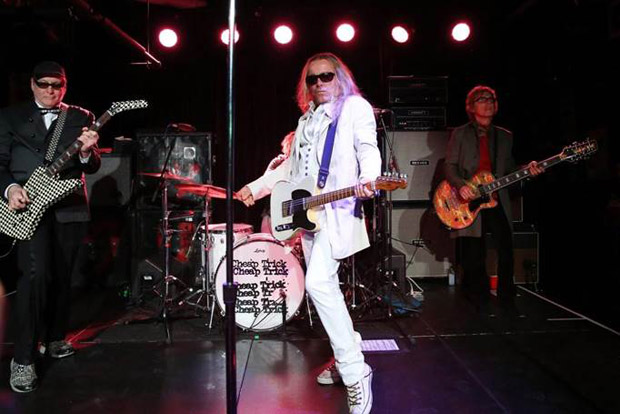 Click here for photos of Cheap Trick at 2014 Riot Fest in Chicago, IL in the QRO Concert Photo Gallery

The set wasn’t the exact same as thirty-five years ago – the band couldn’t introduce their greatest song, “Surrender”, as “the single on our new album, out this week”, or call “Lookout” a “new one.”  They did, however, have a recording of their original introduction to Japanese fans introduce them again – and it’s the exact same line-up as 1978, as other than bassist Tom Peterson’s departure & return in the eighties, Cheap Trick has impressively kept the same personnel.  It also wasn’t the actual original At Budokan release, which was a mix of songs from both nights – but they do the second night in Los Angeles at El Rey Theatre.  And yes, there were a lot of smartphones in the air, taking terrible photos – something not even the Japanese had in 1978.

The concept of ‘Big in Japan’ may have been done best in This Is Spinal Tap (like so many other concepts in rock ‘n’ roll), as the movie ends with The Tap following up a disastrous American tour by going to Japan after their song “Sex Farm” hit #5 there.  But Cheap Trick aren’t big in just Japan anymore…