Cheap Trick are iconic and also sometimes under the radar.... 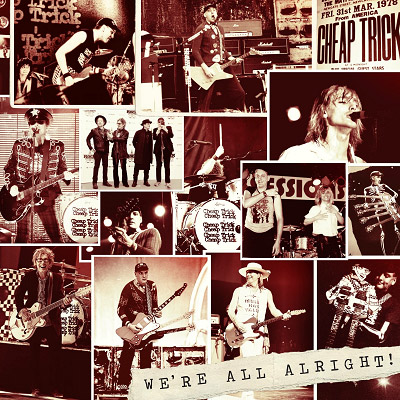 Click here for photos of Cheap Trick at Ascend Amphitheater in Nashville, TN on June 28th, 2018 in the QRO Concert Photo Gallery

Cheap Trick are iconic and also sometimes under the radar, but We’re All Alright! release begins with the more familiar and somewhat cliche’ ‘classic rock’ sound in “You Got It Going On” and “Long Time Coming”, but by “Nowhere”, “Radio Lover”, “Lolita” and “Brand New Name on an Old Tatoo”, it is more in depth.

Even in “Nowhere” it is louder, and “Floating Down” generally takes the album to a more interesting and rocking place with the ethereal noise it makes. Then, the drums on, “She’s Alright” and “Listen To Me” are raw and these songs are more anthemic because of it.

Closing We’re All Alright! with “The Rest of My Life” is acceptable, but not the end all be all, as it is a sort of trippy relaxer-type closer that one might hear more typically in folk. Here, “The Rest of My Life” serves it’s part musically, but is overall just a thematic end. We’re All Alright! is really more about rock and has a live feel to it through and through, which is both a sign of difference for a ordinarily more polished Cheap Trick and of familiarity in the rock aspect.