Chemical Brothers are given a chance to share their musical vision for the action flick 'Hanna', sticking to what they know best, making this soundtrack one of the best... 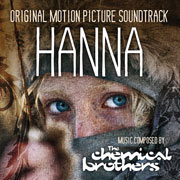 Soundtrack composition seems to have fallen on the lap of some of the iconic ‘90s bands.  After the Academy Award and Emmy-winning masterpiece by Trent Reznor for The Social Network and the extravagant showcase by Daft Punk for Tron Legacy (whose movie wasn’t worth this level of musical lyricism – QRO review), the Chemical Brothers are given a chance to share their musical vision for the action flick Hanna, directed by Joe Wright.

Contrary to both Daft Punk and Trent Reznor, who decided to compose music somewhat out of their natural environment, Tom Rowlands and Ed Simons decided to stick to what they know best, making this soundtrack one of the best electronic albums so far in 2011.

The album starts with “Hanna’s Theme”, a homage to the haunting music accompanying the ‘80s Japanimation classic Akira.  Then the Chemical Brothers crank up the heavy beats on “Escape 700” for a tune that feels like a SWAT assault on your brain.  This summarizes the mood of the soundtrack, a mix of eerie music box tones building up tension like in “The Devil Is In the Detail” or “The Sandman” and big beat tracks, staples of the Chemical Brothers sound such as “Banhof Rumble”, “The Devil Is In the Beat” or “Hanna vs. Marissa”.  The ensemble is punctuated with shorter atmosphere tracks that cohesively link the album.  The 51-minute album ends with a reprise of Hanna’s theme featuring vocals by Stephanie Dosen.

More than just a movie soundtrack, the Chemical Brothers create an electronic album where they allow themselves to show more depth than usual.  They are still masters of the dance floor with beats that hit the listener like a truck but they also have an almost feminine delicateness, especially in the ambient tracks, while maintaining their recognizable sound.