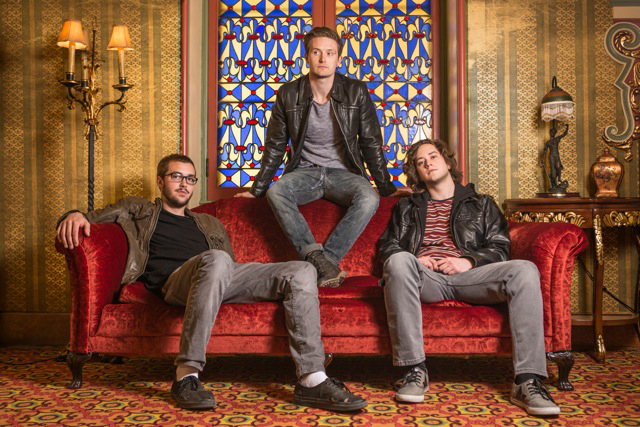 QRO: The name ‘Plaid Brixx’ is an interesting one. Where did you come up with that?

Chris Duggan: I have a weird fascination with plaid. I love plaid. I just one day somehow thought, it would be cool to see a brick wall, but instead of the ruddy brick color, have it be plaid.

QRO: All the different bricks making one big plaid pattern or–

CD: Yeah something like that, and then it just kind of got changed to two Xs.

CD: Ha-ha, yeah, you can just do more with that.

QRO: How did you and the other guys in your band get together?

CD: They were two years behind me in high school, and we played in a band together back then. So then I went off to college and I didn’t talk to them for a while. Well, we kept in touch a little here and there and we just got back together about five months ago.

QRO: So you have a little more history than your 2013 formation might suggest.

QRO: Because you are relatively young as a band, do you think you’re still getting a feel for your sound?

CD: No. I have a clear-cut vision of what I want it to sound like and the EP that we just released is that exactly. I broke my back to make it sound perfect. I spent a ton of time on it.

I have a clear-cut vision of what I want it to sound like and the EP that we just released is that exactly. I broke my back to make it sound perfect.

QRO: How long did the recording take?

CD: I did all the live instrumentation on it before the other guys were with the band. I just wanted to jump right into the songs.

QRO: So you can actually play all the instruments in your band?

CD: They play them better than I play them but I did the studio things. Our next record is going be with everyone playing their parts.

QRO: How long do you expect it to be before you release another record?

CD: I have five songs demoed; completely done and lyrics written and then I’m starting work on another batch this week.

QRO: How long does it take to write a full song?

QRO: What’s your process for writing each instrument’s part?

QRO: I read that you’ve been writing songs since you were ten years old?

QRO: And how old are you now?

QRO: Is this the first festival you guys have played?

QRO: Do you have a preference on the kind of venue you like to play in?

CD: I like festivals, but I prefer playing in grungy little dive bar places. I love packed dive bars. Everyone’s sweaty, it’s hot, it’s just awesome. The crowd’s a little more intimate; I love that you can really connect with people. It’s less impersonal than yelling, “How you guys doing?” into a big crowd.

QRO: From what I understand you’re a relatively local or region kind of act. Do you have any plans to tour outside of the area?

CD: Absolutely. Absolutely, but we just wanted to get our touring legs before expanding out. The Midwest is really the perfect place to do that – to tour from. I think it’s like 50% of the population of America is within 6 hours of the Midwest.

QRO: Do you have a lot of upcoming shows?

CD: Yeah, we’ve got a show every weekend this month. Detroit, Cincinnati, another show in Columbus. We just played Cleveland last night and we have Fashion Meets tomorrow night.

QRO: Where can people get your music?

CD: We went only digital with the EP, which you can find on iTunes, but we’ll probably go physical as well with the full album.

QRO: Sounds good. Thanks for your time.

CD: Nice talking to you.