From his flat in Paris, guitarist Christian Mazzalai of Phoenix talked with QRO.... 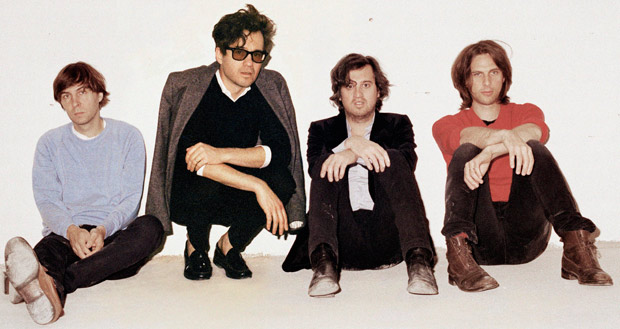 From his flat in Paris, guitarist Christian Mazzalai of Phoenix talked with QRO.  In the conversation, Mazzalai talked about making this year’s Bankrupt! (QRO review), how they got out of the shadow of its massively successful predecessor, Wolfgang Amadeus Phoenix (QRO review), why they don’t plan how a record’s gonna turn out, their current tour, their last tour (including playing the Fellini-esque Saturday Night Live, Harlem’s famed Apollo Theater, and having R. Kelly join them on stage at Coachella), why so many bands are from their hometown of Versailles despite it being the “opposite of Brooklyn”, and more…

Christian Mazzalai: It was different.  It was the same level of enjoyment – was even more intense, I would say, Bankrupt!

QRO: After all of the success & acclaim that Wolfgang got, how hard was it to get out of that record’s shadow?

CM: It was quite easy to forget about Wolfgang, because we toured for two years.  When we are fed up, and we feel we don’t progress, we quit touring, every time.  So at the end, we thought, ‘That’s it.  We can do better.’  We had new ideas forming.

So for two years we were, we thought it was time to go back.  We were so excited to do new songs, we closed all the doors – after seeing the world for two years, we just wanted to be the four of us in one little room in Paris.  So after a few weeks we totally forgot – we didn’t see anyone for two years.  We forgot totally about the outside world.  We even didn’t even see any movies.  We were totally, 100% – more than 100% – focused on writing new stuff.

So there was no pressure – the past was not even anything for us.

QRO: Did you write most the record in that period, or did you write any while you were on the road, touring?

CM: No, we wrote only in that period.  When we’re on the road, we have so many things to do for the live– every night we try to improve, for the night after.  So actually we don’t have time to write anything.

QRO: With Bankrupt!, there was a definite shift in the sound towards more of an electronic, more keyboards – was that intentional?  What brought that about?

CM: I think nothing was really conscious, because we know that all the conscious ideas we have are, they are clever, but they are not pure and powerful.  So they are boring after one week.  So we always have ideas when we go into write, but after one or two weeks, they become too predictable; they are boring, actually.

So everything we’ve done on this album has been totally unconscious.  We don’t know where they came from, and we didn’t want to know…

When you write songs on tour, you write bad songs…

QRO: What do you do for drums when you’re writing & recording?

CM: We have a keyboard with samples, all the best samples, drum sounds – [Thomas] plays on it; he’s kind of the drummer when we write the songs.

QRO: What did you do in your hiatus between the last Wolfgang tour and starting work on Bankrupt!?

QRO: You’re at home right now, but you’re also on tour.  Is it weird to go home, while you’re on tour?

QRO: But when you’re touring in Europe, in France or nearby, do you go home, or do you always just stay wherever you’re staying?

CM: No, I stay in the city [we’re playing].  Sometimes, we have the day off, which we do in Paris, like today.

QRO: How has touring Bankrupt! compared to touring Wolfgang?

CM: Every tour is different; every show is different.  I’m not that objective – we have our own little vision.

During the two years of recording, every day for one hour, we were working on that perfect sound, so we could play everything live.  Because there are so many layers on the new album – wanting to be able to play anything; no loops, no tapes.  So we have a very complex system, so we can play with three little keyboards, and play so many layers.  I think we are much more focused on the sound and arrangement.  And the visuals, too.  We are working on the visuals, too.

QRO: You played The Apollo Theater in New York – during “Bankrupt!”, you had changing colors on the screen behind you.  Where did that come from?

CM: [Guitarist[ Laurent [Brancowitz] was the one who found the idea for “Bankrupt!” for us.  It was the soundtrack of the album.  It was his craziness.

All of these ideas, when we write songs, the visual, we have in our minds.

QRO: Are there still new cities that you’ve haven’t yet played?

And I would love to go to Russia – we never played in Russia.

QRO: How is it, playing at The Apollo (QRO venue review)?  Is it impossible not to feel very ‘white’ when you’re playing The Apollo?

CM: It’s true.  Although it’s fantastic, very unique.  All the crew is very local.  It’s so not corporate, this venue.  It’s very unique.  We loved it.

So they Googled our name, and then they found a YouTube – it was “Lisztomania”.  The people then, they were like in their fifties, very local, Harlem people – they knew the “Lisztomania” song.  That, I couldn’t believe – the song even touched them.

So they didn’t know I was with them, so I talked with them.  “I know their song; I love it…”  It was a funny moment…

QRO: At that show, singer Thomas Mars went into the crowd a lot, and at other shows – do you ever get worried for him out there?

CM: Yes, sometimes.  I’ll tell you, I’m a bit worried for my friend, you know?  Sometimes he goes into the crowd – they’re not planned; he never plans it.  Because he never thinks to do it – when he’s on stage, we all become… I don’t know what we become, but we do things that we’d never would have.  We don’t control.

It could be dangerous.  But who cares?…

QRO: Do you ever wish that you could go into the crowd during a show, if you weren’t tied down to an actual instrument?

CM: Actually, no…  I’m good with my friends on stage…

QRO: Are you more confident playing TV shows now, since you did so many after Wolfgang – like, is Saturday Night Live easier, the second time around (QRO Indie on Late Night TV)?

Especially when it’s live, you know?  Saturday Night Live, everyone is watching.  It’s live, everything can happen.  So there’s this wonderful, beautiful tension that makes this show very unique.  We’ve done TV shows around the world, but that is our favorite by far.

It’s crazy, because you rehearse for like three days before, so at the end, you know every cameraman, everyone.  And when it starts, there’s such a crazy relief for everyone.  There’s beautiful tension between comedy and stress, you know?  There’s crazy costumes, like chicken costumes, running backstage.  It’s very Fellini – it feels like a Fellini movie…

QRO: How hard is it to fit in older songs, pre-Wolfgang, into the set list?

CM: There are songs we don’t play.

Now, actually, we play more and more, right now, old songs.  But it’s true that two months ago, we were focusing on the last album, the two last ones.  But recently, the last week, we played like four songs off the two first albums.

It’s more like a cycle.  The songs are turning.

QRO: Do you usually play the same older songs, or do you change the older songs from night-to-night?

CM: Every night, we do something a little bit different.  A little different, every night.  Every night we’ll play one new song.  So the set is changing.

Plus there’s change, a new idea, two or three new ideas.  So after one week, there is quite a bit change.  It’s constantly, slowly evolving.

QRO: You’re going to be playing the Paleo Festival in Nyon, Switzerland later this month, and then Osheaga Music Festival in Montreal right after that – do you notice anything different about your crowds in French-speaking countries (that aren’t actually France)?

So we are very humbled, because every time we have a little theory about where we’re going to play, a city or an event, it’s the totally opposite to that thing.

Every night is different, but I would say pretty unique countries are Mexico, Indonesia, and Japan.  These are different from the rest of the world.

They are totally different – Brooklyn is very alive, you know? There are so many places, bars. And Versailles, there is only one bar, and there’s no venue to play. Nothing – it’s a dead city.

We feel the people who love our music are a bit the same, no matter where they come from.

CM: I would say it is the opposite of Brooklyn.  They’re total opposites, which makes it interesting and extreme when they join.  They are extreme points.

They are totally different – Brooklyn is very alive, you know?  There are so many places, bars.  And Versailles, there is only one bar, and there’s no venue to play.  Nothing – it’s a dead city.  But it’s a beautiful city, with beautiful gardens.  So it’s a beautiful place, but it lives in the past – there’s no future anymore, nothing.

Which makes it a different thing.  With Air, or our band, we were really bored, so music was not just as a hobby – it was a way to stay alive.  So I think that’s the reason.

QRO: R. Kelly coming on stage with you at Coachella – how did that come about?

So we called him, and he said yes, and he came.  We met him, actually, just on stage – we didn’t have time; we even didn’t rehearse.  The first time we met him was on stage.  Which created a fantastic tension.

The Shoe-Ins – “I Pledge Allegiance (To Your Body)”