<img src="http://www.qromag.com/wp-content/uploads/2010/10/edwardsharpeinterview.jpg" alt=" " />QRO caught up with Christian Letts, the lead guitarist of Edward Sharpe and the Magnetic Zeros. ... 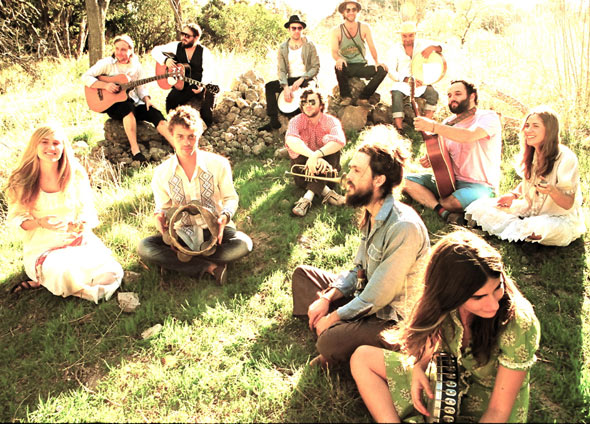 QRO caught up with Christian Letts, the lead guitarist of Edward Sharpe and the Magnetic Zeros, when the band was performing at the DeLuna Festival in Pensacola, Florida.  Christian provided some great insight behind the mantra of this quirky and loveable 10-piece band.

QRO: You guys have some really positive songs, and I read that [singer] Alex Ebert wanted to sing of optimism and positivity instead of songs that just reiterated a destructive attitude.  How has that influenced the band and the way you perform?

It is important to stay positive. The whole band feels that way.

Christian Letts: It is important to stay positive.  The whole band feels that way.  Love and forgiveness really comes through in the music.  It is all about mending relations and enjoying yourself.  It is so great to be on stage and smiling and not be so serious all the time.

QRO: I’ve heard that one of the band’s anthems is to ‘be like a child.’  Does that attitude reflect off stage as well?

CL: Yes, it is about being free and to open myself to live in the moment.  When you’re a child everything is so new and time goes by so slow because you are experiencing so much.  You are just so grateful for everything.  That is what the band is all about; creating music that allows all of us to be that open and free.

QRO: So you have known Alex since you were three.  What was that like?  Has it made collaborating on music easier?

CL: I met Alex after my family moved here from London.  You know, I don’t know many people who can say that they are still best friends with someone they’ve known since they were three.  It’s great.  And there are a lot of relationships like that in the band.  I’ve known [drummer] Josh [Collazo] for about 17 years.  We are all really creative together.  It is great to experience this with my best mates.  We are like family.  We don’t have to speak; we just kind of all get it.

QRO: The album is about the space between bondage and freedom.  Were there specific instances that inspired this theme?

CL: Alex had been working on amazing ideas before we all collaborated.  It is really about the light and the dark.  For me, this album allows us not only freedom and fun on stage but times of meditating.  Like, “Desert Song” is when I can relax on stage and sort things out.

QRO: So you guys are doing a twelve-part video series.  What was the idea behind it, for those who don’t know anything about it?

CL:  It really just came out of some brainstorming sessions.  The fourth is about to come out.  It is still in the editing process.  Have you seen it?

QRO: Parts of the first episode, I was having technical difficulties, but from what I saw it really had some great cinematography.  I couldn’t really make out what it was all about though.  Is it just about Alex wandering in the desert?

CL: It does look incredible.  I can’t really describe it without giving anything away.  Just watch it, it is a good story.  It is just so fortunate that we have friends that are so talented in our extended family.  It is like “you are an amazing person and they can do this?” It is unbelievable and you end up loving them even more.

QRO: I took to twitter and asked for people to send in questions for you and I have one from @abigailiam.  She want to know, “Does your mother dance out of nostalgia to your music the same way my mother does?”

It is great when we tour because we have fans from the age of two years old to eighty who attend.

CL: It is great when we tour because we have fans from the age of two years old to eighty who attend.  We always have someone come up to us and say that we remind them of being young.  It is really touching.  It is great to see people bring their whole families.

As far as my mom goes, I have a really funny story.  My mom was hanging out with her friends, who are called ‘the gang’.  They hang out every Friday night.  They get together and have a few drinks and just spend time together.  One night, the gang, was talking about our song “Home”, and how it reminded them of their past.  My mom didn’t want to say anything because she didn’t want to brag, so she just let them continue talking about how much they loved the song.  Later on, one lady pulls the song up on YouTube and my mom couldn’t contain it anymore and said, “That’s my son!”  It was great.  It was never our goal but it just started happening.

QRO: The other twitter question for you is from @theresa_thiel.  She wants to know what inspired the song “Home”?

CL: It is about the summer where Alex and [singer] Jade [Castrinos] started running around.  The story in the middle of the song is a true story.

QRO: That was going to be my next question.  I have your podcast on Interface and the story is different.  Do they change it up every time?

CL: Yeah it is a new story every time.  It would get boring if you said the same story over and over.

QRO: My last question is, I know ‘Edward Sharpe’ is a character, but is it just an extension of who Alex really is or is it just simply a character he created?

The Vaselines : Sex With an X